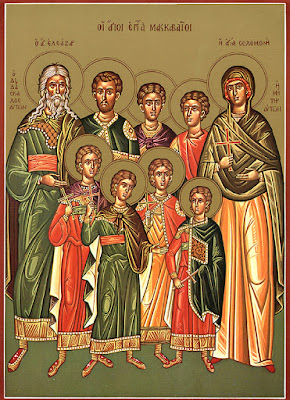 Icon of the Holy Maccabees with their Mother St. Solomone, and their teacher Eleazar (source)

Homily on the Holy Maccabees by Metropolitan Avgoustinos Kantiotes: "Our Faith is True"
We will speak, my beloved, on the Holy Maccabees. They are a star cluster of nine stars, one being their teacher Eleazar, the second was their mother Solomone, and the other seven are her distinguished children of this large family.

These heroes lived in the 2nd century before Christ, during the reign of the King of Syria and Judea of one of the successors of Alexander the Great, Antiochos the Epiphanes (175-163BC). This man, a fanatical idolater, had endless hatred of the Jews, who were the only ones who believed in the true God. He tried with his whole being to uproot from their hearts their faith which had been given to them by Moses. And he slaughtered, slaughtering like a wild beast, more wild than a tiger or a lion. A beast might eat three or four people, but can't eat more. He, however, slaughtered 80,000 Jews, and blood poured through the streets of Jerusalem like a river. And in order to put an end to their religion, he organized an idol-worshiping feast. In the center of the city, he placed a great and large altar, and there sacrificed sheep and goats and bulls and rams, like the Jews would do typically, but--in order to corrupt them--he also sacrificed pigs, hundreds of pigs, to the gods of the idols. And in order to defile the Jews and to strike their religious consciences, he forced them to consume the meat. We must know that the Jews never ate pork. To this day, if you go to a Jewish home, they never eat pork. I won't go into the reasons that they do it, but in any case they continue to keep this.

The Jews fast. Do we? We also need to fast. And here I will make an aside. Are you a Christian, are you Orthodox? I'm not sure. If you were Orthodox, if you firmly believed in our Orthodoxy, you must keep the fasts. Which fasts? You should fast on Wednesday and Friday: Wednesday because on that day was our Lord Jesus Christ betrayed, and Friday, because on that day He was crucified. If you were Orthodox, you would fast during holy and Great Lent, and the other fasting periods, including January 5th, the day before Theophany, August 29th, the day of the Beheading of the Forerunner, and the Exaltation of the Precious Cross.

Do Christians fast today? Unfortunately, this holy practice seems to be going by the wayside. You can break whatever you wish, and you see people even breaking the fast on Holy Friday. During fasting periods, the meat markets are full and the restaurants at night dish out tons of meat. We [Greeks] have become among the largest meat-eaters in the Balkans. We even buy and ship in meat from Bulgaria and Serbia. All of this eating of meat is very serious for our health as well.

So the Jews therefore fasted, and to mock their fasting, Antiochos forced them to eat pork that had been sacrificed to the idols. First, he called the teacher Eleazar, who was an honorable priest. He told him: "I am 90 years old. Until now I have kept the fast according to the divine law, and I cannot even begin to think about abandoning our holy tradition..." He was seized by the soldiers of Antiochos, bound, and thrown into the fine. Thus, he gave up his soul to God.

After this, one by one he called the seven brothers, the Maccabees. He hold them: "Take pity on your youth." He told the first: "I will give you honor, glories, respect." "Keep your honors, I will remain in the home of my fathers/ I will never taste pork sacrificed to the idols..." Thus, the first said not. The same occurred with the second, the third, the fourth, the fifth, the sixth and the seventh. And after they all denied, each began their terrible martyrdom, which one shudders to even think about. Open the Old Testament to the end and turn to the book of Fourth Maccabees (5-12). Don't just read magazines and newspapers. If you are a Christian, read the holy Scriptures. You will say, I don't have time, or I'm tired...Good try!

And in front of all of this, in the presence of the martyrdom of the seven children, who was there, I ask? Their mother, St. Solomone. O, what a mother! She was not at all like some mothers today who would say: "Eat, my child, a little meat, it's nothing..." Today, many mothers are only thinking of their children's bodies, their flesh, in other words. Above the body, they don't see anything else. St. Solomone was a unique mother, a historic mother, a rare example throughout the ages. "No, my children!" she said, "Do not pollute our religion, do not loose the crown of glory!" And their mother prepared them, her seven children, for a terrible martyrdom. It was their faith in God, and this faith showed her to be a heroine, a unique and grand and lady of a woman. How did she find the strength to support all her children to be sacrificed? Don't you think that she felt pain? Of course she felt pain. As her children were being martyred, and she saw them one by one being put to death in the most terrible manner, she suffered. She was pained for each separately, and for them all together. Her pain was greatly multiplied. Mothers, when their children get sick with a fever, they entreat God for the fever to flee from their children and to come to them instead. If, therefore, each child of St. Solomone was martyred once, then she was pained for each, and it was as if she was martyred seven times, multiplied by seven. And, having endured steadfastly and unshaken throughout this trial, in the end, she herself fell into the fire (IV Maccabees 17:1). Thus, they were all burned and became a sacrifice for the love of God, martyrs before Christ.

This, my brethren, in a few words, is the martyrdom of the seven Maccabee children, of their mother Solomone, and their teacher Eleazar. What does it teach us?

Let us as well honor and imitate their struggles out of love, that we might, together with them, become partakers in the glory of the Kingdom of God, to Whom be glory and might unto the ages of ages. Amen.
(+) Bishop Avgoustinos
(Delivered in the Church of the Holy Trinity, Ptolmaidos, on Sunday August 2nd, 1987)
(source) 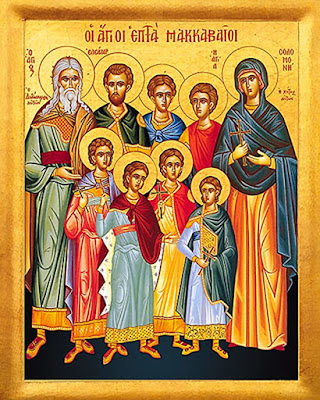 The Holy Maccabee Martyrs (source)
Through the prayers of our Holy Fathers, Lord Jesus Christ our God, have mercy in us and save us! Amen!
Posted by Agioi_Anargyroi at 8:30 AM

God bless you!
Hi dear Orthodox friends, greetings from Eastern Europe.
You are making a great job, i also have a blog: mantuireaorg.blogspot.com