St. Makarios of Corinth, the island of Patmos, and his miraculous Icon 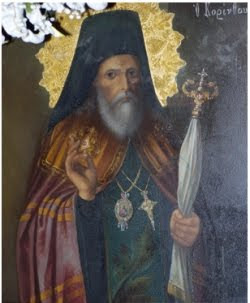 St. Makarios Archbishop of Corinth - Commemorated on April 17th (http://www.chiosnews.com/cn1542010648330.asp)
In a few days is the feast of St. Makarios Notaras, Archbishop of Corinth, and he is greatly honored throughout the world. His virtuous life is very instructive and moving (see the following link for a good overview of his life: http://logismoitouaaron.blogspot.com/2009/05/shepherd-of-corinth-really-blessed.html). His role as one of the leaders of the famed "Kollyvades" movement that has involved so many contemporary Saints is also honorable (see: http://full-of-grace-and-truth.blogspot.com/2009/04/synaxis-of-holy-kollyvades-fathers.html). His work with St. Nikodemos of compiling the Philokalia is awe-inspiring, as it has helped thousands spiritually throught the world. And his spiritual guidance of no less than three Neomartyr Saints of our Church (St. Polydoros (http://full-of-grace-and-truth.blogspot.com/2009/09/st-polydoros-new-martyr-of-cyprus-and.html), St. Theodore the Byzantine (http://full-of-grace-and-truth.blogspot.com/2009/02/holy-neomartyr-st-theodore-byzantine.html), and St. Demetrios of Peloponnesos (http://full-of-grace-and-truth.blogspot.com/2010/04/st-demetrios-new-martyr-of-peloponnesus.html)) reveals to us what a virtuous, humble and loving person he was, and how he has and continues to guide many to Christ. And he and his Holy Relics continue to work many miracles, as he is honored by the Church in Chios (the place of his repose), Corinth (his former see), Patmos, and many other places.

The following is an amateur translation and summary from an interesting page about St. Makarios and the island of Patmos, including a miraculous icon of him. May we all have his blessing! 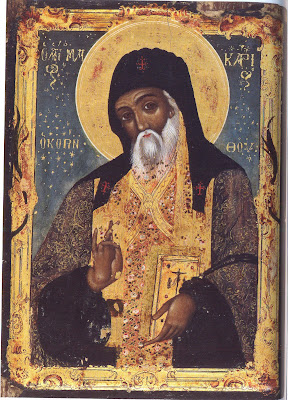 St. Makarios Archbishop of Corinth (http://vatopaidi.files.wordpress.com/2009/04/agios-makarios.jpg)
St. Makarios and the Island of Patmos
On the Holy island of the Apocalypse St. Makarios remained a total of ten years, from 1782-1793 (with short trips to Corinth, Ikaria, the Holy Mountain, etc.) and lived in asceticism without his Hierarchical duties.

During the period which St. Makarios was on the island, the Ecumenical Patriarch Neophytos VII, with a Patriarchal sigil of 1793, removed the then Abbot and Patriarchal Ecarch of Patmos, and until his replacement was elected, installed Hieromonk Daniel (friend and fellow ascetic of Gregorios Gravano, to whom the Patriarch Neophytos himself confessed).

He visited Smyrna, Chios, and later the monasteries founded by the Kollyvades on Ikaria. He then returned to Patmos, and after the election of the new Abbot-Exarch, he left satisfied for Chios, where he remained until his death.

In the treasury of the Holy Monastery is preserved (in excellent condition) his Hierarchical robe, one of his pastoral staffs, a red phelonion, a censer with bells, an antimension, along with many codeces in the Monastery library. During the first months of his stay on Patmos, the Saint inhabited a small ascetic hut at the foot of the Aipos mountain, in the area of Vrontades, today called Agiasma. 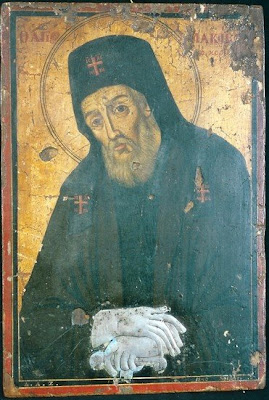 The miraculous icon of St. Makarios Archbishop of Corinth (http://4.bp.blogspot.com/_ZJgXIcYQDu0/SfLTwu2VP3I/AAAAAAAAA1M/kYs4dn6owHw/s1600-h/makarios+patmou.jpg)
The history of the miraculous icon of the Saint
In 1922, George Photeinos and his family were among the many Greeks forced to flee their home in Kokkinia of Asia Minor. He set off with whatever belongings and people he could loaded into his cart. However, after a few meters, the horse pulling the cart began to bray and pull back, risking overturning the cart. George tried without success to pull it along with the help of others, but it continued in the same way. After enough time in this situation, the horse began to walk with his foot in a hidden place and after a short time it appeared to uncover a rectangular object from the water. At this point, the horse neighed, and having lifted its foot, it began to move as normal as if nothing had happened.

All the people ran to see what this rectangular piece of wood was that was uncovered, and they found that it wasn't a simple board, but it was painted on top. George took it and tried to clean it with whatever he could find. Slowly he cleaned the face and revealed that it was an icon of a monastic priest, and he read the epigraph which said: St. Makarios of Corinth, with the date written as November 10th 1850.

Immediately everyone crossed themselves and venerated the holy icon with faith, amazed by the miracle of its finding and being saved from the rainstorm. Then George asked those standing around if anyone had had this icon (thinking that it fell from one of their carts), but no one had seen it before. Thus, with fear of God he took it to his home and placed it in his icon corner. He tried for many days to find someone who had lost it, but he was unable. Thus, according to everyone's suggestions (clergy and people) he decided to keep it.

The years passed until 1940, when World War II left many sick and hungry, with many selling all that they had for a bit of bread. George and his wife faced the same problem. They sold almost everything they had to survive, with the exception of their icons. Unfortunately they did not survive this tribulations, and passed away in 1942. Their few belongings the left to their relatives, with the icon of St. Makarios being taken by George's sister.

After years it passed to the hands of her daughter, Despina Delle, who after a trip to Patmos between 1988 and 1990, visited the Monastery, and there came to know the former Abbot of the Holy Monastery of St. John and Exarch of Patmos (1961-1963) and head of the Patmias School Fr. Paul Niketara (+1999) (the uncle of the current God-protected Abbot and Patriarchal Exarch of Patmos, Fr. Antipas Niketara), and on her next trip, she brought with her the icon which from that point on was treasured by the Monastery, where it is especially honored.

The year 2005 completed 200 years since the death of the Saint, and the Exarchy of Patmos (with the blessing of the Ecumenical Patriarch), decided to dedicate its calendar to St. Makarios Archbishop of Corinth.
(amateur translation of Greek text from: http://syndesmosklchi.blogspot.com/2009/04/blog-post_25.html)

St. Makarios Archbishop of Corinth (http://ocafs.oca.org/FeastSaintsViewer.asp?SID=4&ID=1&FSID=101134)
Apolytikion of St. Makarios of Corinth in the First Tone
Let us faithful praise the shepherd of Corinth, the really Blessed one, who by God’s providence, for reasons ineffable became Chios’ great spiritual leader—him who shone through deeds, words, and prayers; for truly he received from God grace for healing the sick and driving away unclean spirits. Glory to the Father Who destined him, glory to the Son Who elevated him, glory to the Spirit who acts through him.
(http://logismoitouaaron.blogspot.com/2009/05/shepherd-of-corinth-really-blessed.html)
The full life and service of the Saint (in Greek), respectively, are available here (though I'm not sure if they could be used liturgically or not): http://analogion.net/music/Akolou0iaiAgiwn/0417_BiosAgiouMakariouKorin0ou.pdf, http://analogion.net/music/Akolou0iaiAgiwn/0417_Akolou0iaAgiouMakariouKorin0ou.pdf. 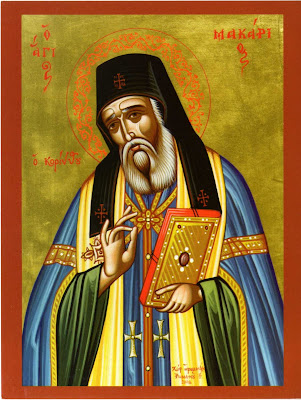