A Brief Explanation of the Symbolism of the Analabos 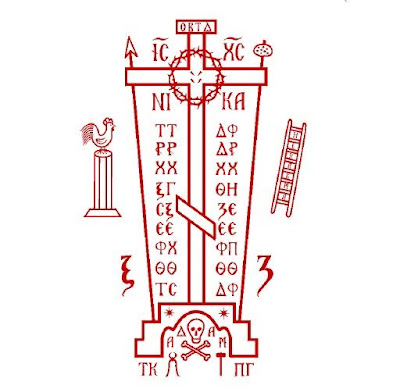 A Brief Explanation of the Symbolism of the Analabos
The άνάλαβος (Analab[v]os), which is the distinctive garment of a monk or a nun Tonsured into the highest grade of Orthodox monasticism, the Great Schema, is adorned with the instruments of the Passion of Christ. It takes its name from the Greek αναλαμβάνω (“to take up”), serving as a constant reminder to the one who wears it that he or she must “take up his cross daily” (St. Luke 9:23). The ornately-plaited Crosses that cover the Analabos. the Polystavrion (πολυσταύριον, from πολύς, “many,” and σταυρός, “Cross”)—a name often, though less accurately, also applied to the Analabos—reminds the monastic that he or she is “crucified with Christ” (Galatians 2:20):

The upright post and the traverse beam represent the stipes and the patibulum that formed “the Cross of our Lord Jesus Christ” (Gala-tians 6:14), upon which “all day long…[He] stretched forth…[His]… hands unto a disobedient and gainsaying people” (Isaiah 65:2; Romans 10:21).

The skull and crossbones represent “the first man Adam” (I Corinthians 15:45), who by tradition “return[ed] unto the ground” (Genesis 3:19) at this very spot, the reason that this place of execution, “full of dead men’s bones” (St. Matthew 23:27). became the place where “the last Adam was made a quickening spirit” (I Corinthians 15:45).

The lance represents the “spear [that] pierced His side”; “and forthwith came there out blood and water” (St. John 19:34) from Him Who “took one of…[Adam's]…ribs, and closed up the flesh instead thereof (Genesis 2:21) and Who “washed us from our sins in His Own blood” (Apocalypse 1:5).

The plaque at the bottom of the Cross represents the suppedaneum of Christ, “His footstool” (Psalm 98:5), “the place where His feet have stood” (Psalm 131:7). It is slanted because, according to one tradition, at the moment when “Jesus cried with a loud voice, and gave up the spirit” (St. Mark 15:37), He allowed a violent death spasm to convulse His legs, dislodging His footrest in such a manner that one end pointed upwards, indicating that the soul of the penitent thief, Saint Dismas, “the one on His right hand” (St. Mark 15:27). would be “carried up into Heaven” (St. Luke 24:51), while the other end, pointed downwards, indicated that the soul of the impenitent thief, Gestas, “the other on His left” (St. Mark 15:27), would “be thrust down to Hell” (St. Luke 10:15), showing that all of us, “the evil and…the good. …the just and…the unjust” (St. Matthew 5:45), “are weighed in the balance” (Ecclesiasticus 21:25) of the Cross of Christ.

The Greek letters that appear on the Analabos are abbreviations of phrases that extol the Cross as “the power of God” (I Corinthians 1:18). From top to bottom:

There are other items and abbreviations that may appear on the Analabos, but these are sufficient to demonstrate that this holy garment silently proclaims “the preaching of the Cross” (I Corinthians 1:18) through its mystical symbolism, declaring for its wearer, “God forbid that I should glory, save in the Cross of our Lord Jesus Christ, by Whom the world is crucified unto me, and I unto the world” (Galatians 6:14). 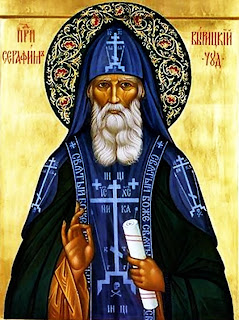 Icon of St. Seraphim of Vyritsa wearing the Analavos of the Great Schema (the more extensive version from the Russian tradition) (http://www.rel.gr/photo/displayimage.php?album=26&pos=328)

Through the prayers of our Holy Fathers, Lord Jesus Christ our God, have mercy on us and save us! Amen!
Posted by Agioi_Anargyroi at 4:48 AM

WOW. This really needs to go into Wikipedia, there is no entry for the analabos there.