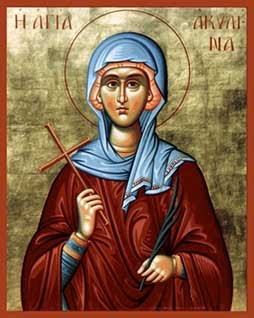 St. Akylina (Aquilina) the Virgin Martyr of Byblos - Commemorated on June 13th (http://home.iprimus.com.au/xenos/akylina.html)
"Aquilina was born in the Palestinian town of Byblus of honorable Christian parents. At age seven, little Aquilina was already completely versed in the true Christian life and at age ten she was so filled with divine understanding and the grace of the Holy Spirit that she, with great power and zealousness, preached Christ to her female companions. When Diocletian's persecution began, someone accused Aquilina before Volusian, the imperial deputy, who was more like a beast than a man. At first, Volusian ordered that Aquilina be flogged and after that, a red hot rod be pierced through her ears and brain. Until the last moment, the virgin Aquilina freely and openly confessed Christ the Lord and when her brain and blood began to flow from her head, she fell as though dead. The deputy, thinking Aquilina was indeed dead, ordered her body to be carried outside the city and thrown upon a dung heap for the dogs to consume. But, an angel of God appeared to her at night and said to her: "Arise, and be whole!" And the virgin arose and was whole and for a long time she offered up praise of thanksgiving to God imploring Him not to deprive her to fulfill her martyr's mortification. A voice from heaven was heard: "Go, it will be to you as you pray" and Aquilina set out for the town. The gates of the town opened on their own accord before her and she entered like a spirit into the palace of the deputy and appeared before his bed. The deputy was seized with unspeakable fear, seeing the virgin alive whom he thought was dead. The following day, according to his command, the executioners led Aquilina out to behead her. Before her beheading, the virgin Aquilina prayed to God on her knees and gave up her soul. The executioner beheaded her lifeless head. Her relics gave healing to many of the sick. Aquilina was twelve years old when she suffered for the Lord: suffered and crowned with the martyr's wreath in the year 293 A.D."
(http://www.westsrbdio.org/prolog/prolog.htm) 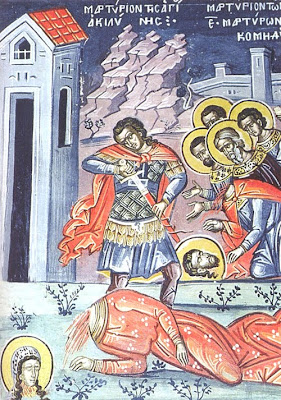 The Martyrdom of St. Akylina (http://vatopaidi.files.wordpress.com/2010/06/akylina2.jpg)
Dismissal Hymn (Fourth Tone)
O Lord Jesus, to You Your lamb cries with a great voice, “O my Bridegroom, You I love; and seeking You, I now contest, and with Your baptism am crucified and buried. I suffer for Your sake, that I may reign with You; for Your sake I die, that I may live in You: accept me offered out of longing to You as a spotless sacrifice. Lord, save our souls through her intercessions, since You are great in mercy.
Kontakion (Third Tone)
With the sprinkling of your blood you were made pure, O fair virgin, and with crowns of martyrdom you are crowned, O Akylina; Christ your Bridegroom, Who gives life everlasting and for this reason has given you to those in afflictions, for the healing of their illness and their salvation when they in faith flee to you.
(http://home.iprimus.com.au/xenos/akylina.html)
Through the prayers of our Holy Fathers, Lord Jesus Christ our God, have mercy on us and save us! Amen!
Posted by Agioi_Anargyroi at 11:41 AM

St Aquilina was born in Phoenicia . not Palestina .. Phoenicia has nothing to do with the Syrians nor the Philistins
the Phoenicians suffered syria - assyrian invasion .. even the old testament witness how Jezebel ( daughter of Ittobaal - king of Tyre ) she got married to the king of Israel in allaince of both countries to face the Syrian expansion ... greeks and romans were the Phoenicians greatest ennemies .. WHY DO YOU ADOPT THEIR DESIGNATIONS .. the Phoenicians never called themselves Syrians nor philistins .. their insciptions show how rooted they are in Phoenicia - Lebanon .. there are no syrian inscriptions identifying themselves as phoenicians nor canaanites .. same goes for the philisitns and the israelis .. please respect our country's history and read it from its own people themselves

Historians are aware that Herodotus was the first to give the names of Palestine and Syria to southern and eastern Canaan respectively (cf. Annex I, Map of Phoenicia by Rawlinson, 1889). He did so arbitrarily because of his ignorance of the history and geography of our Region. The Greeks adopted his appellation and the Romans followed them. But as soon as the Phoenician, Septimus Severus (146-211 AD) became Emperor of Rome, he restored to the Region the name Phoenicia.
.. In Herodotus' text, historians found many errors.The southern part of the Land of Canaan was not called Palestine at that time, nor was it so called by its people - including Herod the Great (37 BC to 4 AD) (cf. Annex VI, map). The name Philistia remained that of the territory south of Jaffa and north of Gaza.
Christ never called his country Palestine, and the name also does not appear in the Koran.
Herodotus - falsely considered "Father of History" - was the first to claim that the Phoenicians are not the original habitant of lebanon and contradicted himself and said once that they came from the shores of the Indian Ocean and another time from the shores of the Sea of Eritrea, i.e. the Red Sea (I, 1; IV, 37; VII, 89).

please correct your informations , to prevent errors , just use the Phoenician identity not the palestinian nor the syrians ... thank you