Excerpt from the Homily on St. George the Trophy-bearer by St. Andrew of Crete 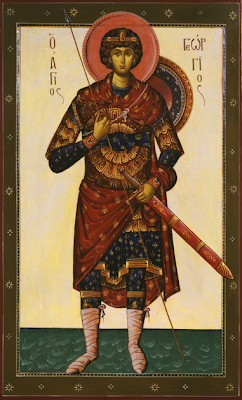 Always, and with each of the Holy Martyrs, the feasts are radiant and proper. But more radiant and proper, however, is today's feast that is celebrated, of George the glorious great martyr, for this festival not only bears the character of the imitation of the passion of the Lord, and adorns with the athletic struggle of the Martyr, and shines with the beauty and grace of spring, but beyond this, it bears the character of the radiance of the two great feasts of the Master: of the Resurrection, I mean, and the Ascension, and is found as a radiant moon between two suns, whose rays shine from both sides, and thus receiving the same rays, shines imitating Christ for the whole world, for though the Master's feast of the saving passion, and the light-bearing and all-festal Resurrection of Jesus Christ the true God, and Son of God, the creator of all the martyrs, Who suffered for us and was martyred under Pontius Pilate, according to the Apostle, and with His very passion and death, granted to us victory over the passions and death. I speak of the Resurrection of the Lord, which accordingly gives rise to one portion of this feast of the martyr, which before it dawns upon the church of Christ as a great sun. We proceed straightaway to this fellow dawn of this feast of George, which shines also with that of the radiant and most graceful season of spring. And with the glorious Ascension of the Lord to the heavens, through which our very nature was granted to be seated with the Father, thus follows harmoniously the other latter portion of this feast of the Martyr.

And let not one think that it is by chance that the memory of George is between these two great feasts of the Master. No, but I say that this was accomplished according to divine providence, and through the revelation of the divine closeness (οικειότητα) of things, in other words, to reveal to us George, who was martyred for Christ, and the extreme love which this George had towards Him Whom he was martyred for, and how George not only become one with the passion of Christ through his martyrdom, but also shared the same season and days during which the Lord suffered. For, as the passion and the Resurrection of the Lord exceeds all the other feasts of the Master, thus, through the feast of spring, in a similar manner the feast of the martyr George exceeds the other feasts of martyrs throughout the year. For this feast is only celebrated after the holy Resurrection, and is celebrated during the time of most-radiant spring. And because those from the one side and the other are so joy-bestowing from the festival of the martyr, it is worthy also to present the beauty and radiance to one another. The festival is beautiful, the message is saving, and the works and actions are godly...
(http://www.orp.gr/?p=2982) 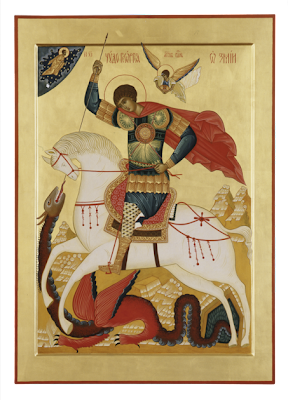 St. George the Great Martyr and Trophy-bearer (http://www.ruicon.ru/exhibition/1x1.php?page_30=200&)
Christ is risen from the dead, by death trampling down upon death, and to those in the tombs, bestowing life!
Truly the Lord is risen!
Posted by Agioi_Anargyroi at 4:30 PM

Labels: St. Andrew of Crete, St. George the Trophy-bearer, Writings of the Saints