Excerpt from the Commentary on the Healing of the Paralytic, by St. John Chrysostom, Part I 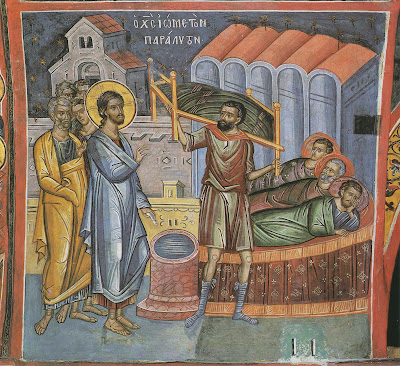 Christ healing the Paralytic at Bethesda - Commemorated the Fourth Sunday of Pascha (http://www.ruicon.ru/arts-new/fresco/1x1-dtl/dionisiat_gretciya/istcelenie_rasslablennogo_spuskaemogo_skvoz_krishu/?page_19=1902&p_f_12_temp_id=1&p_f_12_63=1&ref-cat=)

Excerpt from the Commentary on the Healing of the Paralytic, by St. John Chrysostom, Part I
Ver. 2, 3. “Now there is at Jerusalem a sheep pool, called in the Hebrew tongue Bethesda, having five porches. In these lay a great multitude of impotent folk, of halt, blind, withered, waiting for the moving of the water.”
What manner of cure is this? What mystery doth it signify to us? For these things are not written carelessly, or without a purpose, but as by a figure and type they show in outline things to come, in order that what was exceedingly strange might not by coming unexpectedly harm among the many the power of faith. What then is it that they show in outline? A Baptism was about to be given, possessing much power, and the greatest of gifts, a Baptism purging all sins, and making men alive instead of dead. These things then are foreshown as in a picture by the pool, and by many other circumstances. And first is given a water which purges the stains of our bodies, and those defilements which are not, but seem to be, as those from touching the dead, those from leprosy, and other similar causes; under the old covenant one may see many things done by water on this account. However, let us now proceed to the matter in hand.


First then, as I before said, He causeth defilements of our bodies, and afterwards infirmities of different kinds, to be done away by water. Because God, desiring to bring us nearer to faith in baptism, no longer healeth defilements only, but diseases also. For those figures which came nearer [in time] to the reality, both as regarded Baptism, and the Passion, and the rest, were plainer than the more ancient; and as the guards near the person of the prince are more splendid than those before, so was it with the types. And “an Angel came down and troubled the water,” and endued it with a healing power, that the Jews might learn that much more could the Lord of Angels heal the diseases of the soul. Yet as here it was not simply the nature of the water that healed, (for then this would have always taken place,) but water joined to the operation of the Angel; so in our case, it is not merely the water that worketh, but when it hath received the grace of the Spirit, then it putteth away all our sins. Around this pool “lay a great multitude of impotent folk, of blind, halt, withered, waiting for the moving of the water”; but then infirmity was a hindrance to him who desired to be healed, now each hath power to approach, for now it is not an Angel that troubleth, it is the Lord of Angels who worketh all. The sick man cannot now say, “I have no man”; he cannot say, “While I am coming another steppeth down before me”; though the whole world should come, the grace is not spent, the power is not exhausted, but remaineth equally great as it was before. Just as the sun’s beams give light every day, yet are not exhausted, nor is their light made less by giving so abundant a supply; so, and much more, the power of the Spirit is in no way lessened by the numbers of those who enjoy it. And this miracle was done in order that men, learning that it is possible by water to heal the diseases of the body, and being exercised in this for a long time, might more easily believe that it can also heal the diseases of the soul.


But why did Jesus, leaving the rest, come to one who was of thirty-eight years standing? And why did He ask him, “Wilt thou be made whole?” Not that He might learn, that was needless; but that He might show the man’s perseverance, and that we might know that it was on this account that He left the others and came to him. What then saith he? “Yea Lord,” he saith, but “I have no man when the water is troubled to put me into the pool, but while I am coming another steppeth down before me.”


It was that we might learn these circumstances that Jesus asked, “Wilt thou be made whole?” and said not, “Wilt thou that I heal thee?” (for as yet the man had formed no exalted notions concerning Him,) but “Wilt thou be made whole?” Astonishing was the perseverance of the paralytic, he was of thirty and eight years standing, and each year hoping to be freed from his disease, he continued in attendance, and withdrew not. Had he not been very persevering, would not the future, if not the past, have been sufficient to lead him from the spot? Consider, I pray you, how watchful it was likely that the other sick men there would be since the time when the water was troubled was uncertain. The lame and halt indeed might observe it, but how did the blind see? Perhaps they learnt it from the clamor which arose. 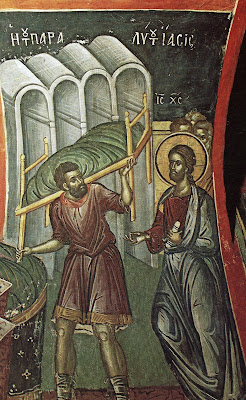 
Christ is risen from the dead, by death trampling down upon death, and to those in the tombs, bestowing life!
Truly the Lord is risen!
Posted by Agioi_Anargyroi at 7:53 PM