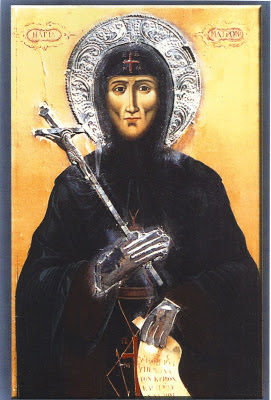 
by Christina Dedoussis
St Matrona lived in the 15 th century. She was born on the island of Chios, Greece, in the village called Volissos. It was from this same village that a later Saint, Saint Marcella, martyred.

Saint Matrona's parents were highly respected and well-to-do Christians, compared to the other villagers. Mary, as she was called before she became a nun, was the youngest of seven children.

When the time came for her parents to arrange her marriage, she refused because she wanted to remain a virgin. She wanted to become a bride of Christ...To avoid this marriage, Mary left Volissos and her family and went to an area overlooking the village, called Katavasis. Here she began her spiritual struggle. She fasted, prayed and meditated.

Meanwhile, her parents searched the area to find her. After locating her they convinced her to return home. Mary complied with her parents' wishes, except for one - she refused to wed. Her parents, seeing that she still desired to lead a monastic life, gave her their consent to pursue her ambition. 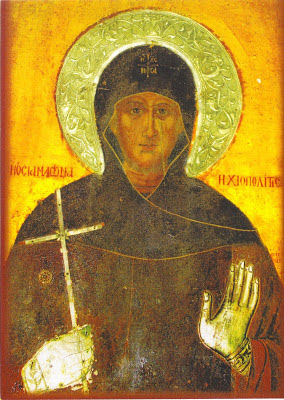 When Mary's parents died, she distributed the farmland she inherited among her sisters and the orphans of the community. She left Volissos, never to see her village again and returned to Katavasis, where she stayed for three years as she re-examined her spiritual beliefs. Her food was basic and was brought to her by one of her sisters.

God, however, wanted her to guide others in the way of righteousness and show them how to obtain their salvation, therefore she left Katavasis and went to the capital of the island. Here there were many women's monasteries which followed the rules of monastic society. It was in one of these monasteries that Mary was to spend the remainder of her life, undergoing spiritual struggles, leading others towards salvation and performing miracles.

Upon visiting the different monasteries, Mary found a secluded one which she preferred. It consisted of three nuns, a mother and her two daughters. The nuns, realising her sincerity, immediately welcomed her into their home. At this point Mary's name was changed to Matrona. (When a nun reaches a high point in her monastic life and becomes a Stavrophore, a new name is bestowed upon her, symbolising a second baptism and a new way of life). 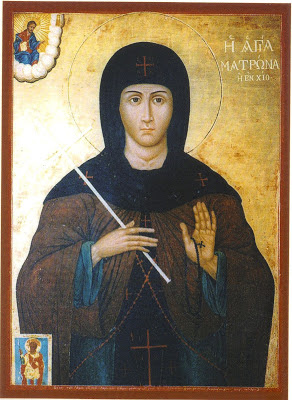 Matrona surpassed the other nuns in her devotion, spirituality and understanding. Her sincerity convinced other girls to come to this monastery and lead the same type of life. The church itself was small and the Abbess agreed with Matrona to enlarge it and to build cells for the nuns. Any remaining farmland and personal belongings Matrona sold and with the money received, the monastery built a public bath so that the poor and wayfarers could bathe. These baths were very common during this time. After this, the renovation of the church began.

When the church was completed (with the help of Saint Artemios to whom it was dedicated) the Abbess of the monastery died. The nuns then elected Matrona as the new Abbess. 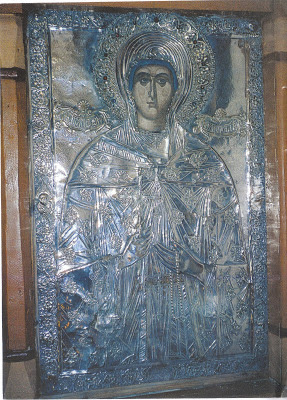 After these events, Matrona dreamt of her own death. Subsequent to this, she suffered from an illness for seven days. In the seven days she advised the other nuns as a mother would advise her children. She received Holy Communion and died on 20 October 1462. She was buried in the monastery's church in which she spent the greater part of her life. To honour this great Saint, God allowed her holy body to perform miracles after death. Many people with all types of afflictions came to the church and were cured.

In the village of Katavasis, there was a church built to honour the place where Saint Matrona had first started her spiritual struggles. Later, a larger church was built and the smaller one was used as a cemetery chapel.

The story of Saint Matrona of Chios is one of the most beautiful in our church history. She is an excellent example of a devoted Christian who tried in every sense of the word to be closer to her Lord, and guide and help her fellow man. She continues to perform many miracles for the worthy faithful. 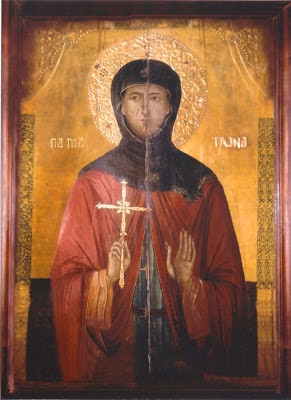 
O Lord Jesus, to You Your lamb cries with a great voice, "O my Bridegroom, You I love; and seeking You, I now contest, and with Your baptism am crucified and buried. I suffer for Your sake, that I may reign with You; for Your sake I die, that I may live in You: accept me offered out of longing to You as a spotless sacrifice. Lord, save our souls through her intercessions, since You are great in mercy".

Filled with the Light of the Spirit, O Matrona, you regarded your prison cell as a bridal chamber; and from it hastened to your radiant dwelling in the heavens, crying out, "In divine love for You, O Word, I gladly endured scourgings". 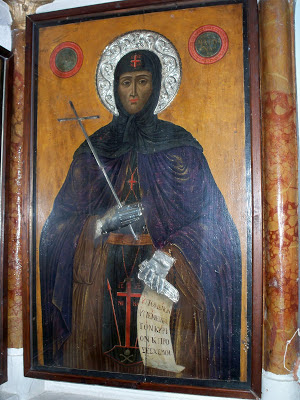 Through the prayers of our Holy Fathers, Lord Jesus Christ our God, have mercy on us and save us! Amen!
Posted by Agioi_Anargyroi at 7:58 AM