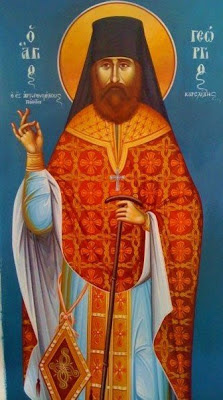 St. George Karslides, the New Righteous Confessor of Drama (+1959) - Commemorated November 4th (source)
Idiomelon of the Liti in the Fourth Tone. Glory. (amateur translations below)
He who kept his mind in Hades, and was made worthy of receiving the uncreated light, as an illumined father of the light of Tabor, George, the ascetic of Drama, let us praise, and cry out in faith: you who wisely guided those who hastened to the unsetting moon [of your grace], dissolve from them the darkness of ignorance, through the fire of your ascetical boldness, enlighten our fathers towards the increase of virtue and theosis.

Doxastikon of the Aposticha in the Plagal of the Fourth Tone
He who hid a most-healthy heart in a sickly body, and had continuous memory of death, O George, surnamed Karslides, the ever-memorable, let us sweetly praise him with hymns, for he took up the Cross of the Lord upon his shoulders unflinchingly, and passed through the stadium of asceticism, founding the Monastery of His Ascension in Drama, which was shown forth as a workshop of prayer and righteousness. Within her, he completed the struggle well, and from death proceeded towards life to be united with Christ, Who bestows upon the world the great and rich mercy. 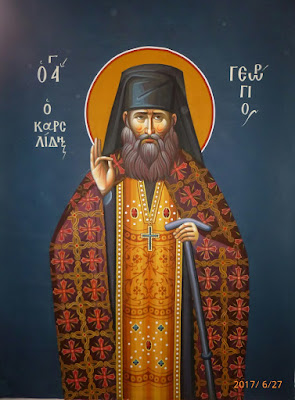 
Apolytikion of St. George Karslides the Righteous of Drama
O river of Divine Grace, O God-bearing George, and vessel of miracles of all kinds, we praise him crying out, Ascension, Holy Monastery's Founder, and Drama's protector and shelterer, do not despise those who entreat you, and magnify you, O Righteous Father. Glory to Christ Who glorified you. Glory to Him who sanctified you, Glory to Him who showed forth this new ascetic fruitful.


Kontakion in the Plagal of the Fourth Tone
The indomitable sower of virtue, who sowed with piety and love as a plow in the souls [of the faithful], let us hymn in a befitting manner him who founded the Monastery of the Ascension in Drama in the latter days, crying out with proper hymns: Hail, of blessed George.
Synaxarion
On the fourth of this month (November), the memory of our righteous and God-bearing father George, surnamed Karslides, the spiritual father of Drama, and founder of the Holy Monastery of the Ascension of Christ.


Doxastikon of the Praises in the Plagal of the First Tone
Come, O band who loves the righteous ones, let us praise the Righteous one among confessors, and spirit-bearing teacher of piety, George, the founder of the Monastery of the Ascension, and cry out with joyous souls: he who endured hardship and troubles in humility as an all-radiant lamp in years trying for the ranks of the Orthodox, enlighten my mind to meditate on the law of the Lord, and to confess the name of the Lord in every instance, Who grants to us through your prayers the great mercy.
(source) 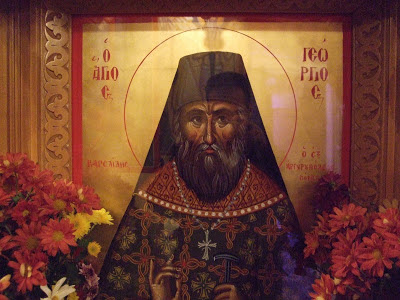 St. George Karslides (source)
Through the prayers of our Holy Fathers, Lord Jesus Christ our God, have mercy on us and save us! Amen!

Posted by Agioi_Anargyroi at 9:11 PM