Elder Ephraim of Katounakia on the Priesthood 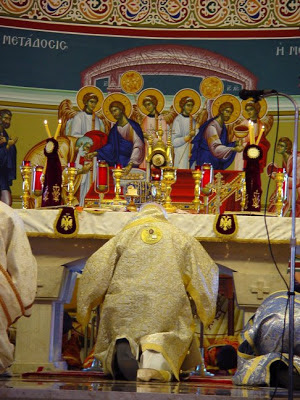 Elder Ephraim of Katounakia on the Priesthood
When you liturgize, have in mind that you are a mediator. You receive from the world pain, tears, sickness, and supplications and you offer them above to the throne of the Godhead. Then you transfer to the world comfort, therapy, and whatever need someone may have. God has made you worthy of a great office, my child. Cultivate it. The ear of God is at the mouth of the priest.

The stole has great power. The stole is an arbiter of fallen man with the Father, with his Creator. This is why, as much as you can, commemorate more names.

During the time of the Turkish occupation there were many priests circulating around, but one priest circulated and gathered names to be commemorated during the Liturgy. The Turkish officer said to him: "Hey, he is raising a revolution of the people." He took the priest and brought him in. In his sleep all of those the priest had commemorated appeared to him and said: "Listen, either you release the priest, because he commemorated us and consoled us, or we will take your first child." The Turk became fearful. This was during the Turkish occupation. "Come priest, go and be well", he said, "go, for will I lose my child?"

The stole has great power, my child, great power. As much as you can, commemorate more names.

Yes, years ago I was given by Fr. Arsenios, spiritual brother of Elder Joseph, some names from the time he was an immigrant from Russia and came to Greece. I commemorated them. Later he told me: "You know, Elder, what I saw? I saw in my sleep that those names I gave you, well I went to one of their homes. I asked how they were doing here. 'Well,' they said, 'somewhat good, but Papa-Ephraim comes and consoles us.'" It was because I was commemorating his name. Yes. Later he asked another: "How are you doing?" They said: "So so, but it's raining a bit and we're cold, but Papa-Ephraim comes and consoles us." I said to him: "It is, my brother, the names I commemorate."

Why did Papa-Planas become a saint? He commemorated whole papers. Once I remembered some names and I posted them at the Proskomide. There at the clipboard. So in my sleep I saw that certain elderly came, with old clothes, as I heard from the mother of my father, and they said: "You, my child, wrote us down, but the Elder, my child, does not commemorate us."

"Come on," I said to the Elder, "why don't you commemorate them?"

"I could not see them clearly," he said.

"Elder, I saw this and that, and they said that the Elder does not commemorate us," I said.

From that time I received the desire to commemorate as many more names. The more the names, the more the wages you receive. But this is the greatest charity: to unite man with God. This is the greatest charity. And you can do this. As many more names, my child, that you commemorate, so much more the wages do you receive. Yes.
Source: Translated by John Sanidopoulos (http://www.johnsanidopoulos.com/2012/12/elder-ephraim-katounakiotis-on.html) 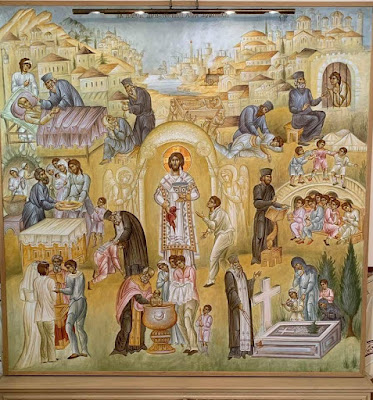 Icon depicting Christ the Great High Priest in the center, surrounded by His Holy Priests that are serving the Holy Sacraments (e.g. Baptisms, Weddings, Holy Confession, etc.) and other pastoral activities (e.g. Catechism, visiting the sick, etc.) as His representatives (source)

Through the prayers of our Holy Fathers, Lord Jesus Christ our God, have mercy on us and save us! Amen!
Posted by Agioi_Anargyroi at 10:52 AM