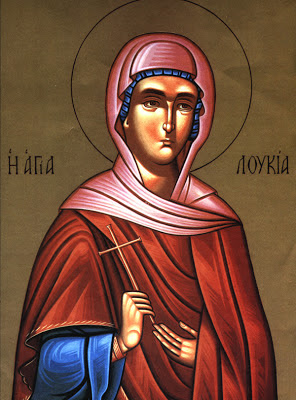 St. Lucy the Virgin Martyr of Syracuse - Commemorated December 13 (http://pravicon.com/images/sv/s1305/s1305005.jpg)
Saint Lucy the Virgin-Martyr (283-304), also known as Saint Lucia, was born in Syracuse, Sicily and was martyred for the Christian faith in the persecution of Emperor Diocletian around the year 304 AD. Her feast day is celebrated on December 13.
There is no doubt of the great veneration that was shown to St. Lucy by the early church. She is one of those few female saints whose names occur in the canon of Pope Gregory the Great, and there are special prayers and antiphons for her in his Sacramentary. She is also commemorated in the ancient Roman Martyrology. At the beginning of the 8th century the Bishop Aldhelm of Sherborne included a brief account of her life among the virgins praised in De Laude Virginitatis, and following him, the Venerable Bede inserted the story in his Martyrology.
Lucy was born of rich and noble parents about the year 283. Her father was of Roman origin, but his early death left her dependent upon her mother, whose name, Eutychia, seems to indicate that she came of Greek stock. 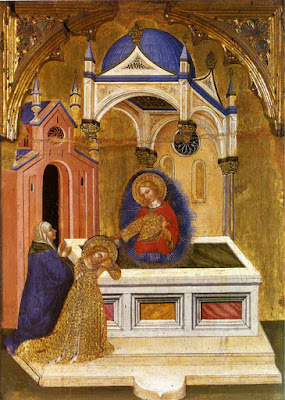 St. Agatha appearing to St. Lucy who had come to venerate at her tomb (source)

Her mother, Eutychia, had suffered four years with dysentery but Lucy had heard the renown of Saint Agatha of Palermo, the patroness of Catania; when they were at a Liturgy, the gospel was read that made mention of a woman who was healed of the dysentery by touching of the hem of the garment of Jesus Christ, which convinced her mother to pray together at Saint Agatha's tomb. They stayed up all night praying, until they fell asleep, exhausted. Saint Agatha then appeared in a vision to Lucy and said, "Soon you shall be the glory of Syracuse, as I am of Catania." At that instant Eutychia was cured.
Lucy secretly consecrated her virginity to God, and distributed her wealth to the poor. Since she refused to marry a pagan, the rejected suitor denounced her to the prefect Paschasius as a Christian, and she was arrested. 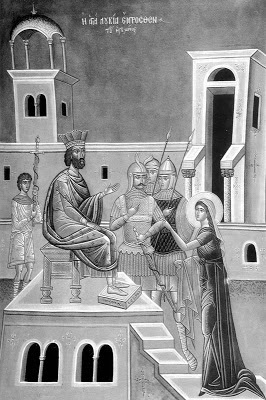 St. Lucy before the Governor Paschasius (http://pravicon.com/images/sv/s1305/s1305003.jpg)
She was first of all condemned to suffer the shame of prostitution; but in the strength of God she stood immovable, so that they could not drag her away to the place of shame, and thus she preserved her purity. Then the pagans attempted to burn her alive, and heaped bundles of wood about her and set them on fire, and again God saved her. Finally, she was killed by a sword thrust to the throat, and so she gave her spirit up to God. Holy Martyr Lucy, pray to God for us! 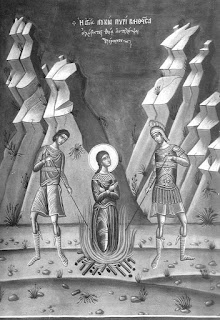 St. Lucy, unharmed amidst the flames (http://pravicon.com/images/sv/s1305/s1305003.jpg)
Lucy's name is derived from the Latin word lux or lucis meaning "light", and since there is a late tradition that she was blinded by her torturers, she is regarded as the patron saint of eyesight, of the blind, and of lucidity.[note 1] She should not be confused with St Lucy of Campania (July 6).
With regard to her relics, Sigebert (1030-1112), a monk of Gembloux, wrote that the body lay undisturbed in Sicily for around 400 years. But in 878, as marauding Islamic Saracens threatened Syracuse, the relics were transferred to a secret place. 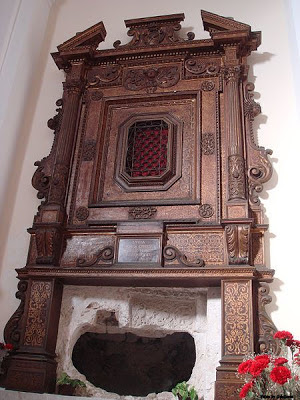 The empty tomb of St. Lucy in Syracuse, Sicily (source)
In 1039 the Byzantine general George Maniakes took them and removed them to Constantinople. On their capture of Constantinople in 1204, the French found some of the relics in that city, and the Doge of Venice secured them for the monastery of San Giorgio at Venice. In 1313 they were moved within Venice to the city church named in her honour. In 1513 the Venetians presented to Louis XII of France the head of the saint, which he deposited in the cathedral church of Bourges. 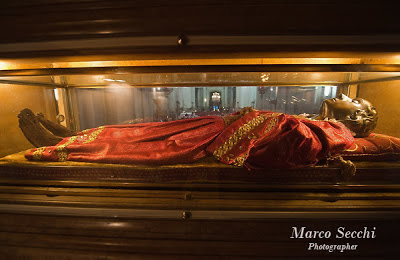 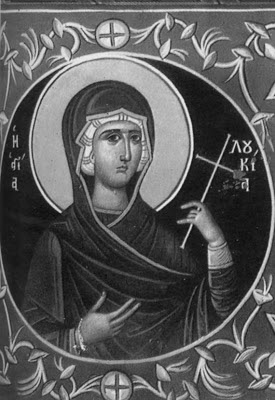 Troparion (Tone 5)
Wearing the radiant cloak of virginity, and being betrothed to the Lifegiver Christ, you forsook the love of your earthly betrothed, O Lucy Virgin-Martyr, therefore as a bridal gift, you have brought to Christ the outpouring of your blood. You also intercede to Him for us all!


Through the prayers of our Holy Fathers, Lord Jesus Christ our God, have mercy on us and save us! Amen!
Posted by Agioi_Anargyroi at 4:43 AM

"I am the resurrection and the life. He who believes in me will live, even though he dies; and whoever lives and believes in me will never die." "Lazarus, come out!" St. Lucy, pray for us, to carry all illnesses, diseases and infirmities in my son, nieces, nephews, godchild (parents, grandparents, greatgrandparents (step)) for cleansing, healing, deliverance. Promises of Christ, that He'll protect our senses.