"I am Raphael...Remember it, for sometime you will need me" 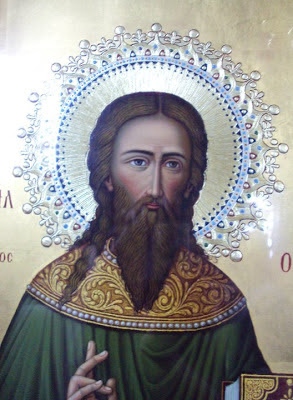 St. Raphael of Lesvos, the Newly-revealed Hieromartyr and Wonderworker (source)
"I am Raphael..." (amateur translation)
I share, with great moving feelings and longing, after a whole 18 years, to my Christian brethren, the great miracle which St. Raphael worked for my family.

After our marriage, we had three sons. Our third son was born premature, in October 1994, at 30 weeks of pregnancy. He remained for a period of time in the incubator, during which he was able to withstand, and grow like a normal child.We rejoiced, and there was nothing to cast a shadow on our happiness.

Like every summer, the summer of 1994 (18 years ago), we spent our vacation at our home on the island. One day at noon, having paged through a weekly periodical and solved crossword puzzles, I fell asleep. Then I saw a strange dream: A monk with a dark gray robe, with a sharp and well-defined beard, of medium height, stood straight amid sparse vegetation and short trees.

“I am Raphael,” he told me, and he pointed with his hand at a rocky cave near him, as he continued: “Here is my home. Remember it, for sometime you will need me. Remember my name!”

“Raphael,” I thought, “I don't know any Saint named Raphael.” Not wishing to forget my name, I wrote it down on the periodical which I was reading before I went to sleep. Later, I continued my mid-day sleep, not knowing what a great role this dream would play a few days later.

When I awoke, I asked my mother if she knew of some Saint with that name. “No” was her response.

The days passed and our vacation came to an end. We returned to our home in Nea Makri. Everything returned to its daily pace. One day, straightaway my small son (who was 9 months at the time) was playing in his play pen, when he fell on the side, between his toys. He looked as if he were dying. He was dark, and covered with sweat, and his stomach was moving in and out like a baby bird on its last breath. Immediately, we took him to the hospital, where the doctors diagnosed unconsciousness. Most likely, they said, some small toy was in his mouth, and for awhile, it blocked his breathing. Nothing significant. Thus we returned home. However, the same day, he experienced the same event for a second and third and fourth times. At that point, we took him to the children's hospital. The doctors, after many tests, diagnosed him with some problem in his brain. A problem that would follow him for the rest of his life.

Above medical diagnosis, however, and beyond medical therapy, stands our religion with her Saints. Thus, amidst our worry and distress, when I though that my life turned black, and that the joy from my family would be lost forever, the door to the department opened, and an old woman entered, selling icons of Saints for her living. In her large back, my eyes happened to fall on one icon. It was of St. Raphael.

Then I remembered the dream that I had seen. That same day, I called a pediatrician relative of ours, who told me: “Where we physicians stop, the Saints continue. Tomorrow, my mother-in-law will complete a vow of hers to St. Raphael in Mytilene, and will light a candle for the child.”

Then I understood that I was not alone and helpless as I had thought. And the miracle did not wait, for St. Raphael led me to him through these two events, bringing to mind my dream. Therefore, day and night I entreated St. Raphael to heal my child: “O my Saint Raphael, pray for us, help us, do not leave us without help in bearing this Cross.”

Later, I was thinking that temptations are for all men... “You know, O Saint Raphael, you will lead us. If you think that this is the will of our God, help us to think that our Cross is lighter.”

Days passed. The doctors came to their conclusions. These events in my child seemed epileptic. The medical treatment that they came my child was treatment for epilepsy. However, Saint Raphael had worked his miracle, for amidst epilepsy, the new tests did not show anything wrong with my child's brain, that he was not in any danger.

Several days later, we visited Panagia of Tinos, in order to light a candle for the health of the child, and to thank her for the great gift that she gave us through her intercessions. On the road to this pilgrimage, a small boy came up to us.

“Do you know what my name is?” he asked.

“Raphael, ma'am.” And he disappeared into the crowd. He disappeared like an angel. I could not understand this. However, to me, at that instant, he appeared like an angel of the Lord, saying: “Saint Raphael is the one who saved your child. You should thank him.” And in reality, St. Raphael worked a great miracle for us. The months passed, and all of the medical tests all diverged, and even more than before, my child continued to grow without any problem with his health at all.

We thank St. Raphael, who made us strong like iron. And all these years, we would visit every church that treasured Holy Relics of the Saint to venerate. 18 whole years have passed. One day, we saw a sign on the street, calling the faithful to the feast of St. Raphael in Ano Souli of Marathon. Who would have thought that the Saint who had brought joy again to our home, was so near our home for all these years. My greater astonishment was when I visited the Monastery of St. Raphael in Ano Souli, I saw the place that St. Raphael was indicating in my dream 18 years before, when he told me: “This is my home.”

May his name be glorified, who made me worthy, after so many years, to be found at “his home”, and to venerate his grace! May the whole world have his protection!
(source)

Through the prayers of our Holy Fathers, Lord Jesus Christ our God, have mercy on us and save us! Amen!
Posted by Agioi_Anargyroi at 3:52 PM