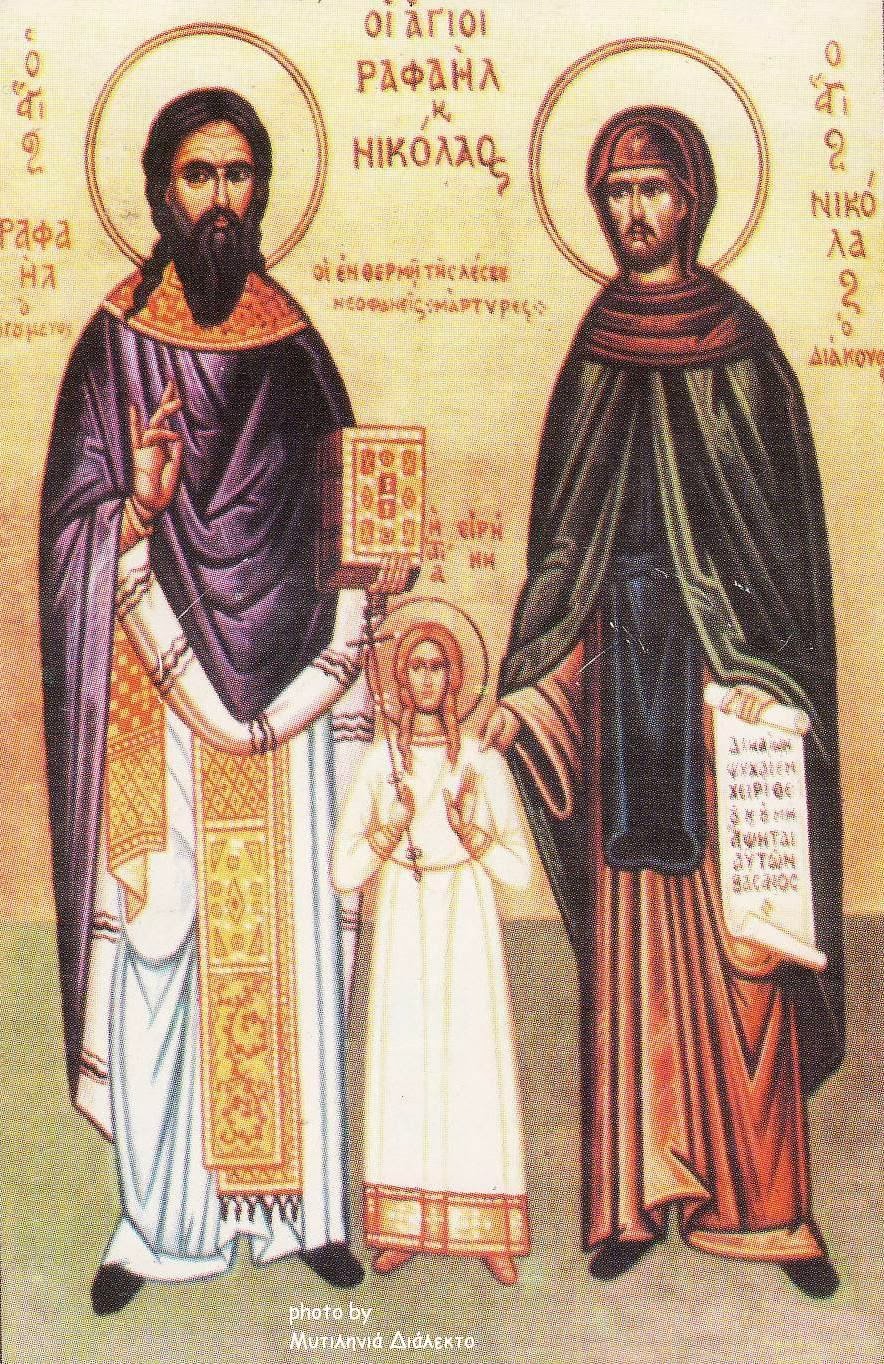 
St. Raphael is well-known for his miracles and the strength of the love that he shows to his faithful ones! Here is another one of his miracles which occurred for one of our fellow men who was in need:

“One Sunday, Mr. Georgios K. came to the Holy Monastery of St. Raphael Ano Souli in Marathon, together with his family.

He venerated in the Holy Church of St. Raphael, and at the place where he appeared, he prayed, and asked for some holy oil from the vigil lamp of St Raphael. And having discussed some theological topics with the fathers of the Holy Monastery, he left. Over the next days, therefore, the Saint, brought about everything which he sought in his prayer, while he placed the holy oil on his back, where he had chronic pain and distress. The pains passed at the same instant. Full of joy therefore, and being especially moved, he came the next Sunday together with his family to thank St. Raphael. (Another miracle follows...)

And though the fathers always lock the gate of the Holy Monastery at noon (and though there is always one of the fathers there when open), they found the gate open!!! And thus they entered to venerate. They were uncovered by the fathers when they entered the church of St. Raphael. This, in reality, was a miracle of St. Raphael, because the fathers always took great care to not leave the gate open, because shepherd pass by continuously with their herds of goats, which enter the courtyard of the Monastery, and wreak havoc on the trees and flowers.

St. Raphael, who desired to let these pious friends of his in, who had come to thank him, showed once again his practical love and providence. From then on, Mr. Georgios K. and his family are bound to the Monastery of St. Raphael, and consider St. Raphael as their protector and foundation, and the fathers of his Holy Monastery as their friends and fellow men, which they are.

They visit St. Raphael continuously, to show him honor and to receive his blessing and to show their thankfulness, which in such an obvious way was revealed as greatly received from St. Raphael.

And also, the wondrous signs of St. Raphael continued in the work of Mr. Georgios K., for from the time that he venerated St. Raphael for the second time, and though there was a financial crisis everywhere, he received continuous orders, one after the other, and he began to close major commercial agreements for large quantities of goods. His progress was so instantaneous and substantial that he remained ecstatic and amazed, and he would continuously mutter: “God is wondrous among His Saints...” He sent him, and His other friends, to St. Raphael, who had a problem with their work, with the hope that He would help them also, and that is what occurred.”
(Amateur translation of text from: source)
Through the prayers of our Holy Fathers, Lord Jesus Christ our God, have mercy on us and save us! Amen!
Posted by Agioi_Anargyroi at 2:53 PM