"The Source of wonders came to the source..." 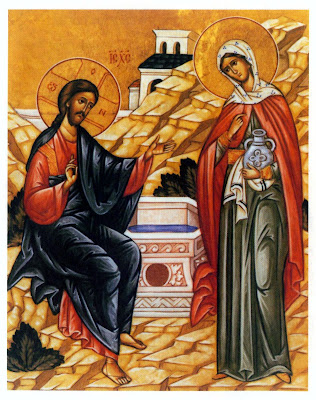 Christ talking with the Samaritan Woman (and later St. Photini) at Jacob's Well (source)
The source of wonders came to the source at the sixth hour to catch the fruit of Eve; for at the same hour Eve had left Paradise by the deception of the serpent. The woman of Samaria then came near to draw water. When the Saviour saw her he said: Give me water to drink and I will fill you with water welling up. The wise woman ran to the city, and at once announced to the crowds: Come, see Christ the Lord, the Saviour of our souls.
-Idiomelon from Great Vespers of the Sunday of the Samaritan Woman, First Tone.
(source)
Christ is risen from the dead, by death, trampling down upon death, and to those in the tombs, He has granted life!
Truly the Lord is risen!
Posted by Agioi_Anargyroi at 8:19 PM