St. Ignatius of Antioch on the Mystery of Christ's Incarnation 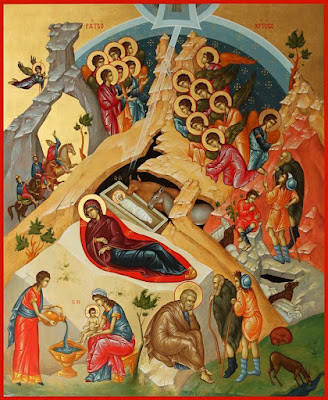 "Let my spirit be counted as nothing for the sake of the cross, which is a stumbling-block" to those that do not believe, but to us salvation and life eternal. "Where is the wise man? where the disputer?" Where is the boasting of those who are styled prudent? For our God, Jesus Christ, was, according to the appointment of God, conceived in the womb by Mary, of the seed of David, but by the Holy Spirit. He was born and baptized, that by His passion He might purify the water.

"Now the virginity of Mary was hidden from the prince of this world, as was also her offspring, and the death of the Lord; three mysteries of renown, which were wrought in silence by God. How, then, was He manifested to the world? A star shone forth in heaven above all the other stars, the light of Which was inexpressible, while its novelty struck men with astonishment. And all the rest of the stars, with the sun and moon, formed a chorus to this star, and its light was exceedingly great above them all. And there was agitation felt as to whence this new spectacle came, so unlike to everything else [in the heavens]. Hence every kind of magic was destroyed, and every bond of wickedness disappeared; ignorance was removed, and the old kingdom abolished, God Himself being manifested in human form for the renewal of eternal life. And now that took a beginning which had been prepared by God. Henceforth all things were in a state of tumult, because He meditated the abolition of death."
-St. Ignatius of Antioch, Epistle to the Ephesians 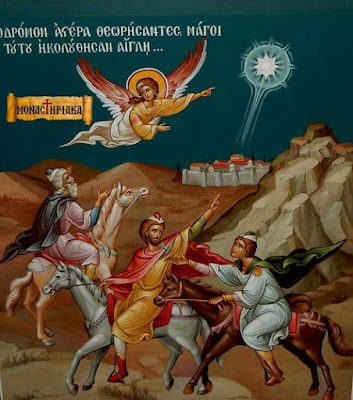 The Magi following the Star (source)
Through the prayers of our Holy Fathers, Lord Jesus Christ our God, have mercy on us and save us! Amen!
Posted by Agioi_Anargyroi at 10:56 AM