St. Demetrios: How much love he had for Christ! 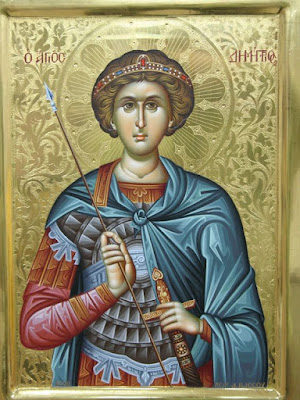 "St. Demetrios was an only child and remained an orphan from a young age. He did not commit any sins of the flesh and never shed his seed upon the earth! Do you understand what a good disposition he had and how much love he had for Christ!


Even though he was a military governor of Thessaloniki, he lived humbly with utter asceticism. He was taught by God, he had the gift of prophecy, and is the greatest myrrh-streamer of Orthodoxy!


Scientists in Paris did a chemical analysis of the myrrh which streams from St. Demetrios, and revealed that the myrrh is made up from 33 components which do not exist anywhere else on the planet Earth!!! The myrrh is a heavenly "essence", and is a gift of the Holy Spirit.


St. Demetrios had revealed that, when he stops to stream forth myrrh, then the sins of the people of Thessaloniki will have exceeded every limit..."
-Elder Ephraim of St. Andrew Skete


Through the prayers of our Holy Fathers, Lord Jesus Christ our God, have mercy on us and save us! Amen!
Posted by Agioi_Anargyroi at 9:51 AM