Icon of St. Polyeuktos the Martyr (http://christopherklitou.com/icon_9_jan_polyeuctus.htm)
"The Holy Martyr Polyeuctus.
The Armenian town of Melitene was soaked in Christian blood, as was all the land of Armenia. The first blood shed for Christ in that town was that of St Polyeuctus, spilled in about the year 259, during the reign of Valerian. There were in the town two friends who were officers: Nearchus and Polyeuctus, the former baptised and the latter unbaptised. When a decree went out from the Emperor that all Christians were to be killed, Nearchus prepared himself for death, though with great sorrow at not having brought his friend Polyeuctus to the true Faith. 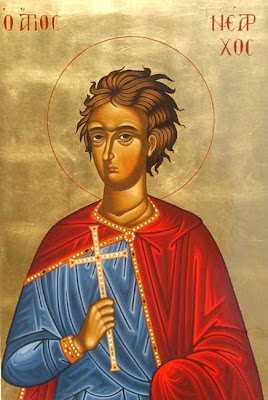 Icon of St. Nerchos the Martyr, whose feast is April 22nd (http://christopherklitou.com/icon_22_april_nearchus.htm)
When Polyeuctus became aware of Nearchus' sorrow, he promised to become a believer. On the following day, he related to Nearchus a dream that he had: the Lord Himself had appeared to him in light, stripped his old clothing from him, clothed him in new and shining raiment and set him upon the saddle of a winged horse. After relating this dream, Polyeuctus went off to the town, tore up the royal decree on the persecution of Christians and smashed many statues of idols. He was tortured and condemned to death. On the way to the place of execution, he caught sight of Nearchus in the crowd and called joyfully to him: 'Save your soul, my dear soul-friend! Remember the vow of love confirmed between us!' And St Nearchus later ended a martyr for Christ in the fire. His feast is on April 22nd." (taken from the Prologue of St. Nikolai: http://www.pomog.org/prologue/January/22.htm) 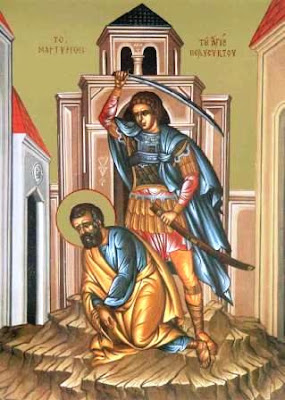 Icon of the Martyrdom of St. Polyeuktos (http://www.photosled.com/data/1185/0109_Polyeyktos11.jpg)
Kontakion of St. Polyeuktos in the Fourth Tone
When the Saviour bowed His head within the Jordan, there He crushed the dragons' heads; as for His trophy-bearing Saint, when Polyeuctus's head was cut off, he put to shame the deceiver and wily foe.
(taken from: http://goarch.org/chapel/saints_view?contentid=378&type=saints)

Through the prayers of our Holy Fathers, Lord Jesus Christ our God, have mercy on us and save us! Amen!
Posted by Agioi_Anargyroi at 8:42 AM