Sts. Paul of Thebes and John the Hut-dweller 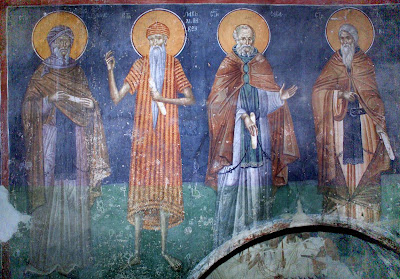 Four great ascetic Saints: Sts. Anthony the Great, Paul of Thebes, Sabbas the Sanctified, and John of the Ladder (http://pravicon.com/images/sv/s1641/s1641005.jpg)
Today (January 15th) our church celebrates the memory of two great ascetics: Sts. Paul of Thebes and John the Hut-dweller. The lives below are taken from the Prologue of St. Nikolai (http://www.pomog.org/prologue/January/28.htm)

Icon of St. Paul of Thebes (taken from: http://www.christopherklitou.com/icon_15_jan_paul_the_theban.htm)
"Our Holy Father Paul of Thebes.
Born of wealthy parents in Lower Thebes in Egypt in the reign of the Emperor Decius, he and a sister of his together inherited all their parents' property. But his brother-,in-law, an idol-worshipper, plotted to seize Paul's half of the inheritance. He therefore threatened Paul that he would betray him to the authorities as a Christian if he did not hand over his share of the property. This misfortune, coupled with the examples of self-sacrifice by the Christian martyrs that Paul saw with his own eyes, induced him to give his half of the property to his sister and go of into the desert, where he lived in asceticism until his death. The spiritual heights attained by this giant of a monk are testified to by no less a person than St Antony the Great, who once visited Paul and saw how the wild animals and birds of the air ministered to him. Returning from this visit, Antony said to his monks: 'Woe is me, my children, a sinful and false monk, who am a monk in name only. I have seen Elias, I have seen John in the desert, and I have seen Paul - in Paradise!' St Paul lived 113 years, and entered peacefully into rest in the Lord in the year 342. 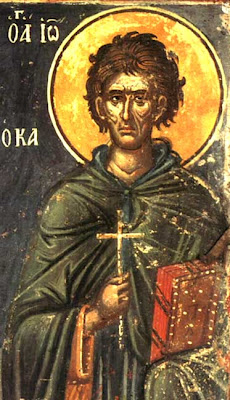 Icon of St. John the Hut-dweller (taken from: http://www.christopherklitou.com/icon_15_jan_john_kalyvites.htm)
Our Holy Father John (The Hut-Dweller) [Kalyvites].
He was born in Constantinople in the early part of the 5th century, of rich and eminent parents whose only child he was. Drawn by inclination to the spiritual life, the young John fled with a monk to a monastery in Asia Minor. He spent six years in this monastery in the greatest restraint, prayer and obedience to the superior. Then the devil attacked him with the temptation to leave the monastery and return to his parents, to live with them as a nobleman. He indeed returned to his parents' home, but dressed as a beggar. He saw his parents, but, not wishing to reveal himself to them as their son, remained as a beggar in their courtyard, living off the crumbs that the servants threw him and enduring much ridicule from all. He lived thus for three years, praying God that He would save the souls of his father and mother. When he fell ill and felt death approaching, he revealed himself to his parents. They recognised him by a precious Gospel-book which they had given him in childhood and which he had kept with him as his sole possession. And so this young man, albeit so rich, saved his soul and those of his parents, overcame the devil and entered into rest in the Lord in about the year 450." 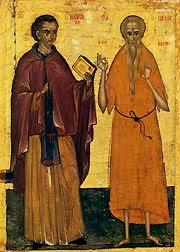 Icon of Sts. John the Hut-dweller and Paul of Thebes (taken from: http://goarch.org/chapel/saints_view?contentid=387&type=saints)

Kontakion of St. Paul of Thebes in the Fourth Tone
O ye faithful, let us all laud the divine Paul, the bright luminary that shone at the virtues' lofty height; and let us joyously cry aloud: O Christ, Thou art the rejoicing of all the Saints.
(taken from: http://goarch.org/chapel/saints_view?contentid=386&type=saints)

Kontakion of St. John the Hut-dweller in the Second Tone
Since thou didst desire a poverty like unto Christ's, O wise Father John, thou didst forsake thy parents' wealth; and while holding in thy hands the most holy Gospel, O righteous one, thou didst follow after Christ God while ceaselessly praying to Him for us all.
(taken from: http://goarch.org/chapel/saints_view?contentid=387&type=saints) 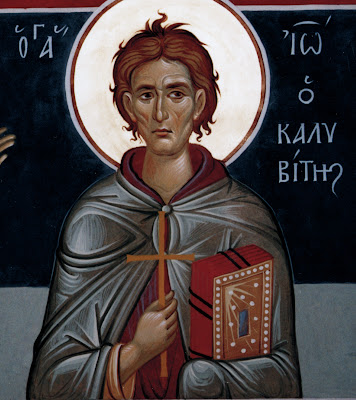 St. John the Hut-dweller (http://days.pravoslavie.ru/jpg/im3960.jpg)
Through the prayers of our Holy Fathers, Lord Jesus Christ our God, have mercy on us and save us! Amen!
Posted by Agioi_Anargyroi at 7:30 AM

Labels: Lives of the Saints, Monasticism