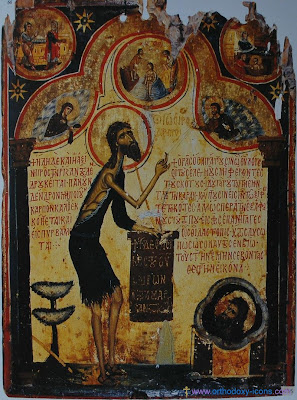 On January 7th, the day after Theophany, we commemorate St. John the Forerunner for his role in Christ's Baptism. First, here is the Gospel reading for today's feast (taken from: http://www.goarch.org/chapel/lectionary_view?type=gospel&code=352&event=375&date=1/7/2009) 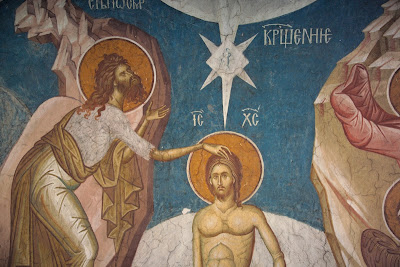 Detail of Fresco of Holy Theophany, from Decani Monastery (taken from: http://www.srpskoblago.org/Archives/Decani/exhibits/Collections/GreatFeasts/CX4K1728_l.html)
"The Reading is from John 1:29-34

At that time, John saw Jesus coming toward him, and said, "Behold, the Lamb of God, who takes away the sin of the world! This is he of whom I said, 'After me comes a man who ranks before me, for he was before me.' I myself did not know him; but for this I came baptizing with water, that he might be revealed to Israel." And John bore witness, "I saw the Spirit descend as a dove from heaven, and it remained on him. I myself did not know him; but he who sent me to baptize with water said to me, 'He on whom you see the Spirit descend and remain, this is he who baptizes with the Holy Spirit.' And I have seen and have borne witness that this is the Son of God." 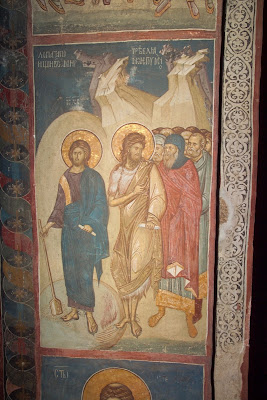 Fresco of St. John the Forerunner preaching to the people about Christ at the Jordan River, and Christ with his "winnowing fork in hand", from Decani Monastery (taken from: http://www.srpskoblago.org/Archives/Decani/exhibits/Collections/SermonsStJohnBaptist/CX4K2587_l.html)
Here is the reading from the Prologue of St. Nikolai for today's feast (from: http://holyascensionofchrist.org/prologue/January/20.htm):

"John's greatest role during his life was enacted on the day of the Theophany, and because of this the Church has, from the earliest times, dedicated the day following that feast to his memory. This day is also connected with an event involving the hand of the Forerunner. The Evangelist Luke desired to take John's body from Sebaste, where the great prophet had been beheaded by Herod, to Antioch, his own birthplace. He succeeded, though, in acquiring and taking only one hand, which was kept in Antioch till the tenth century. It was then moved to Constantinople, whence it disappeared during the Turkish occupation.

St John is commemorated several times during the year, but his greatest feast is on this day, January 7th. Among the Gospel-figures surrounding the Saviour,the person of John the Baptist holds a very special place, by the manner of his birth in this world and of his earthly life, by his role of baptiser of men to repentance and his baptism of the Messiah, and, lastly, by the tragic manner of his departure from this world. He was of such moral purity that he indeed deserved the name 'angel'*, as he was named in the Scriptures, rather than being thought of as just a mortal man. John differs from all the other prophets in that he had the joy of showing forth to the world the One Whom he had foretold.
About the hand of St John: it is related that each year, on his feast-day, the archbishop would bring it out before the people. Sometimes the hand appeared open, and sometimes clenched. In the first case it indicated that it would be a fertile year, and in the second that it would be a year of famine.
(*The word 'messenger' is, in Greek, 'angelos'. See Malachi 3:1, Matt. 11-10-Tr.)" 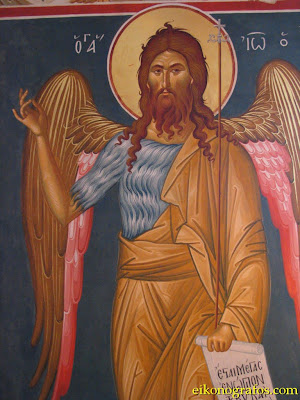 St. John the Forerunner as traditionally depicted with angelic wings (see above for explanation), from Simonopetra Monastery, Mount Athos (Icon courtesy of http://www.eikonografos.com/ used with permission)
St. John the Forerunner is very beloved by the Orthodox throughout the world. In fact, every Tuesday, the Orthodox church commemorates him with corresponding hymns in the Parakletiki (the Holy Angels are commemorated on Mondays, the Holy Apostles and St. Nicholas commemorated on Thursdays, etc.) Also, the Forerunner is especially honored by monastics, as St. John was a prototype for the monastic life in the desert.
Finally, as mentioned above, the Hand of the Forerunner was a great help and blessing for the Church for centuries, working endless miracles for the faithful. According to tradition, the Right Hand of St. John today is protected by the Monastery of Dionysiou on Mount Athos (for more info about the Monastery, see: http://mountathos.gr/active.aspx?mode=en%7B0cfcbcfb-623d-46fc-ac88-88de218eb78a%7DView and http://www.johnsanidopoulos.com/2010/04/miracles-of-right-hand-of-st-john.html).
Note: another tradition holds that the Arm of the Forerunner was translated to Russia after being taken by the Crusader Knights of the Order of St. John. See: http://ocafs.oca.org/FeastSaintsViewer.asp?SID=4&ID=1&FSID=102952 for more info on this feast. (And I do not mean to imply that the two treasures are not compatible with each other).
Through his Relics and Holy Icons, and at the prayers of the faithful, the Forerunner continues to work endless miracles and healings of soul and body to those who ask of him. May St. John the Forerunner intercede to Christ for all of us and help us! Amen! 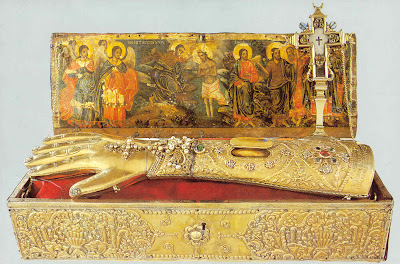 The Right Arm of St. John the Forerunner, kept in the Monastery of Dionysiou on Mount Athos (taken from: http://www.rel.gr/photo/displayimage.php?album=9&pos=45)
Apolytikion of St. John the Forerunner in the Second Tone
The memory of the just is celebrated with hymns of praise, but the Lord's testimony is sufficient for thee, O Forerunner; for thou hast proved to be truly even more venerable than the Prophets, since thou was granted to baptize in the running waters Him Whom they proclaimed. Wherefore, having contested for the truth, thou didst rejoice to announce the good tidings even to those in Hades: that God hath appeared in the flesh, taking away the sin of the world and granting us great mercy.

Kontakion in the Plagal of the Second Tone
The Jordan accepted Your presence in the flesh and reversed its course in fear. John, fulfilling the spiritual ministry, fell back in awe. The ranks of Angels, seeing You in the flesh, baptized in the river, were amazed, and all who were in darkness were filled with light, praising You who appeared and enlightened all.
(taken from: http://www.goarch.org/chapel/saints_view?contentid=375&type=saints) 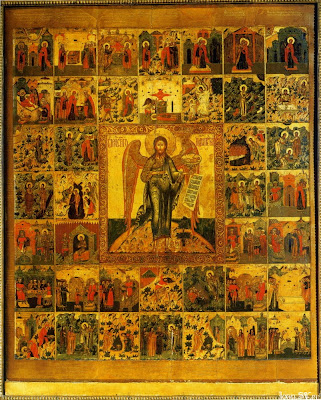