The Saturday of St. Lazarus 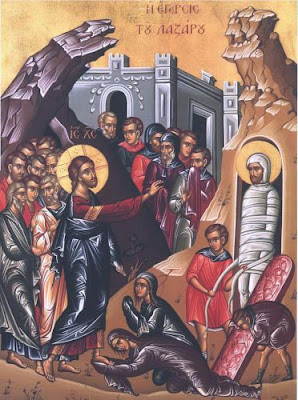 Icon of Christ raising St. Lazarus from the dead (Icon courtesy of http://www.eikonografos.com/ used with permission)
Kontakion - Mode 2. In seeking the heights.
The joy of all men, the Truth who is Christ our God, the light and the life, the resurrection of the world has appeared unto those on earth, in that He is benevolent, becoming the type of the Resurrection, and granting divine remission unto all.
OEkos
To Your disciples, O Creator of all You declared, saying: “Brothers and comrades, our friend has fallen asleep.” Thus You foretold them and taught that You know all things as the Creator of all things. “So, onward; let us go and see a strange burial, and behold Mary’s lament and the tomb of Lazarus. For I shall work a miracle there, preluding the Cross, and granting divine remission unto all.”
Selected hymns from the Praises:
Four days after he had died You raised up Lazarus in Bethany. As soon as You came to the tomb, Your voice became life to the dead man; and Hades, groaning in fear, released him. Great was the miracle! Very merciful Lord, glory to You.
O Lord, even as You said to Martha: I am the Resurrection; so You fulfilled Your word in action by calling back Lazarus from Hades. Resurrect me, also, for I am dead through passions. I beseech You, compassionate One who love mankind.
Glory. Mode 2g.
Today has a miracle been performed that is great and paradoxical. For from the grave Christ has summoned a dead man of four days and resurrected him, and called him His beloved friend. Let us sing glory to Him who is supremely glorious, so that at the intercessions of Lazarus the righteous, He might save our souls.
(taken from Fr. Seraphim Dedes at: http://sgpm.goarch.org/ematins/bilingual/Apr11.pdf) 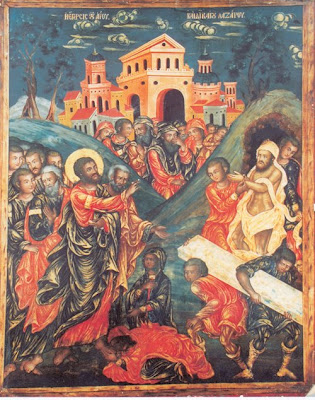 Another icon of Christ raising St. Lazarus from the dead (taken from: http://ayioslazaros.org/istoria_eng.htm)
"Reading:
Lazarus and his sisters Martha and Mary, the friends of the Lord Jesus, had given Him hospitality and served Him many times (Luke 10:38-4z; John 12:2-3). They were from Bethany, a village of Judea. This village is situated in the eastern parts by the foothills of the Mount of Olives, about two Roman miles from Jerusalem. When Lazarus - whose name is a Hellenized form of "Eleazar," which means "God has helped," became ill some days before the saving Passion, his sisters had this report taken to our Saviour, Who was then in Galilee. Nonetheless, He tarried yet two more days until Lazarus died; then He said to His disciples, "Let us go into Judea that I might awake My friend who sleepeth." By this, of course, He meant the deep sleep of death. On arriving at Bethany, He consoled the sisters of Lazarus, who was already four days dead. Jesus groaned in spirit and was troubled at the death of His beloved friend. He asked, "Where have ye laid his body?" and He wept over him. When He drew nigh to the tomb, He commanded that they remove the stone, and He lifted up His eyes, and giving thanks to God the Father, He cried out with a loud voice, "Lazarus, come forth." And he that had been dead four days came forth immediately, bound hand and foot with the grave clothes, and Jesus said to those standing there, "Loose him, and let him go." This is the supernatural wonder wrought by the Saviour that we celebrate on this day.
According to an ancient tradition, it is said that Lazarus was thirty years old when the Lord raised him; then he lived another thirty years on Cyprus and there reposed in the Lord. It is furthermore related that after he was raised from the dead, he never laughed till the end of his life, but that once only, when he saw someone stealing a clay vessel, he smiled and said, "Clay stealing clay." His grave is situated in the city of Kition [today known as Larnaka], having the inscription: "Lazarus the four days dead and friend of Christ." In 890 his sacred relics were transferred to Constantinople by Emperor Leo the Wise, at which time undoubtedly the Emperor composed his stichera for Vespers, "Wishing to behold the tomb of Lazarus . . .""
(taken from: http://goarch.org/chapel/saints_view?contentid=929&PCode=6LENTSa&D=SA&date=4/11/2009)
For St. John Chrysostom's Commentary on the raising of St. Lazarus, from the Gospel of St. John, see: http://www.ccel.org/ccel/schaff/npnf114.iv.lxiv.html, http://www.ccel.org/ccel/schaff/npnf114.iv.lxv.html, and http://www.ccel.org/ccel/schaff/npnf114.iv.lxvi.html. 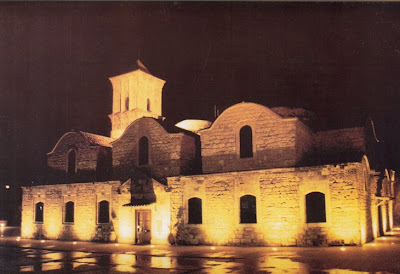 The Church of St. Lazarus, Larnaka, Cyprus (taken from: http://ayioslazaros.org/istoria3_eng.htm)
The Church of St. Lazarus in Larnaka, Cyprus, has an excellent website (http://ayioslazaros.org/) with the account of St. Lazarus in Cyprus, his tradition in the East and the West, the history of the church itself, and numerous pictures. To this day the church remains as a great pilgrimage for the Orthodox, where the faithful can venerate his Holy (Second) Tomb and Relics. 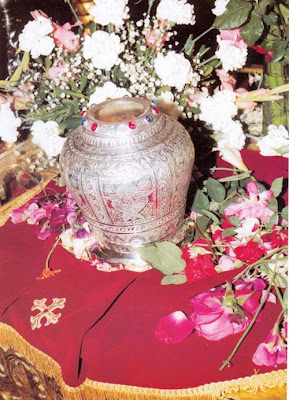 The Holy Skull of St. Lazarus, Larnaka, Cyprus (taken from: http://ayioslazaros.org/istoria_eng.htm)
For more on the Greek traditions for the Saturday of St. Lazarus, see: http://full-of-grace-and-truth.blogspot.com/2010/03/greek-traditions-for-saturday-of-st.html.

May the Lord make us worthy to see His Holy Passion and Glorious Resurrection, through the prayers of the Theotokos, St. Lazarus, and of all the Saints! 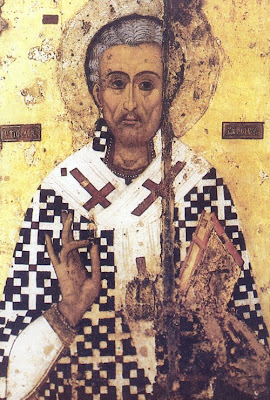 Icon of St. Lazarus the Four-Days-Dead, the Friend of Christ (taken from: http://ayioslazaros.org/istoria_eng.htm)
Through the prayers of our Holy Fathers, Lord Jesus Christ our God, have mercy on us and save us! Amen!
Posted by Agioi_Anargyroi at 9:25 AM

Hello -- thank you for linking to your source when using Fr. Seraphim Dedes' text in your image caption! I wanted to let you know that the URL has changed; the current URL for his materials is http://agesinitiatives.com/dcs/public/dcs . If you wouldn't mind updating, that would be great. Thank you!