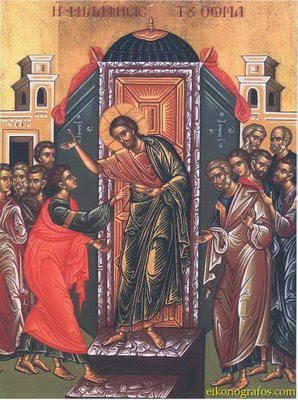 Icon of "Antipascha" (the Feast celebrated the Sunday after Pascha), or Christ appearing to His Disciples through closed doors, and St. Thomas putting his finger in the Lord's side. (Icon courtesy of www.eikonografos.com , used with permission)
Reading (from http://goarch.org/chapel/saints_view?contentid=1039&type=saints&date=4/26/2009&D=S):

"Though the doors were shut at the dwelling where the disciples were gathered for fear of the Jews on the evening of the Sunday after the Passover, our Saviour wondrously entered and stood in their midst, and greeted them with His customary words, "Peace be unto you." Then He showed unto them His hands and feet and side; furthermore, in their presence, He took some fish and a honeycomb and ate before them, and thus assured them of His bodily Resurrection. But Thomas, who was not then present with the others, did not believe their testimony concerning Christ's Resurrection, but said in a decisive manner, "Except I shall see in His hands the print of the nails, and put my finger into the print of the nails, and thrust my hand into His side, I will not believe." Wherefore after eight days, that is, on this day, when the disciples were again gathered together and Thomas was with them, the Lord Jesus came while the doors were shut, as He did formerly. Standing in their midst, He said, "Peace be unto you"; then He said to Thomas, "Bring hither thy finger, and behold my hands; and bring hither thy hand, and thrust it into My side: and be not unbelieving, but believing."

And Thomas, beholding and examining carefully the hands and side of the Master, cried out with faith, "My Lord and my God." Thus he clearly proclaimed the two natures - human and divine - of the God-man (Luke 24:36-49; John 20:19-29).

This day is called Antipascha (meaning "in the stead of Pascha," not "in opposition to Pascha") because with this day, the first Sunday after Pascha, the Church consecrates every Sunday of the year to the commemoration of Pascha, that is, the Resurrection."

For more on St. Thomas the Apostle, see: http://full-of-grace-and-truth.blogspot.com/2008/10/st-thomas-apostle.html.

For a homily by St. Gregory the Great, see: http://www.johnsanidopoulos.com/2010/04/thomas-didnt-believe-so-that-all-may.html.

For a homily by St. John of Kronstadt, see: http://www.johnsanidopoulos.com/2010/04/homily-for-sunday-of-saint-thomas.html. 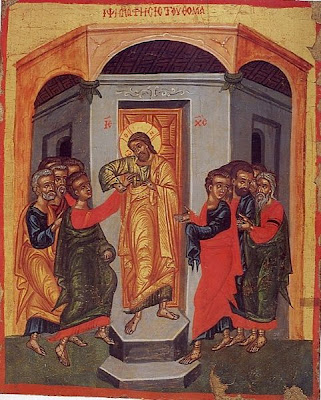 Icon of the Feast of Antipascha (http://vatopaidi.files.wordpress.com/2010/04/cebacf85cf81ceb9ceb1cebaceae-cf84cebfcf85-ceb8cf89cebcceac-2.jpg)
Apolytikion of Antipascha in the Grave Tone
Christ our God, You are the Life that dawned from the grave, though the tomb was sealed. Through closed doors You came to the Apostles. You are the Resurrection of all. And, You renewed us through them with an upright spirit, according to Your great mercy.
Kontakion in the Plagal of the Fourth Tone
Thomas examined Your life-giving side with his probing right hand, O Christ our God. As You entered, though the doors were closed, he cried out to You, with the other Apostles "You are my Lord and my God."
(taken from: http://goarch.org/chapel/saints_view?contentid=1039&type=saints&date=4/26/2009&D=S)

The Ikos.
Who then preserved the Disciple’s palm unmelted when it approached the fiery side of the Lord? Who gave it daring, and gave it strength to handle bone of flame? Only that side which was handled; for had not the side given the power, how could a hand of clay have handled wounds which had shaken things above and things below? This grace was given Thomas, to handle it and to cry out to Christ, ‘You are my Lord and my God’.
(taken from Fr. Ephraim Lash at: http://www.anastasis.org.uk/ThomasSun.htm)

Christ is Risen from the dead, by death, trampling down upon death, and to those in the tombs, bestowing life!
Truly the Lord is risen!
Posted by Agioi_Anargyroi at 5:48 PM