St. Constantine the Righteous of Synnada, "of Jewish descent" 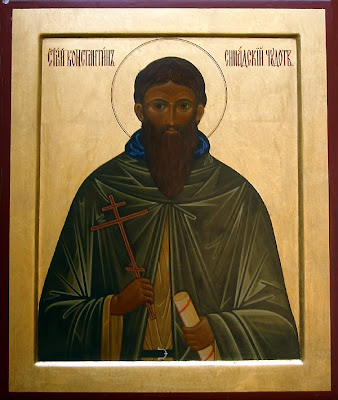 From Jewish thorns a rose,
The divine Constantine blooms and dies.

This Saint was of Jewish descent from the city of Synnada. Once when he was very young, he was following his mother. And seeing a Christian who, having yawned, signed his mouth with the sign of the Precious Cross, from then he did the same, imitating the Christian. Not only this, but the other works of the Christians instilled in him fervent faith. Because of this his face has illumined with divine illumination. And he was taught by God the Christian dogma. And he didn't eat for a period of a few days. To this Saint once a Jewish woman appeared in a lustful manner. The Saint made the sign of the Precious Cross, and the woman fell dead, and again he resurrected her. He was led by a divine cloud to a Monastery, called Fouvoution. There were found magnificent men who embraced the ascetical life, and in whom virtue shined. He was led to the Abbot of the Monastery, and he told him to bring him the Cross and to venerate it and embrace it. When this blessed one embraced the lower part of the Cross with fear and piety, then, O the wonder! the whole Cross was imprinted on his righteous head. This remained on his head until his death.

When he received Holy Baptism, he was named Constantine. What followed was wondrous. In that place, there was a rock which he stepped on as he exited the baptismal fount, and paradoxically his foot was imprinted there. After this he took on so many spiritual struggles, that he surpassed all the Monks of the Monastery in his strictness and asceticism. He worked with the trade of the Apostle Paul, stretching skins and making tents. When he prayed, the place in which he was would fill with fragrance. When he went to Church, the gates of the Church opened to him at his word. From the great purity which he had, he saw noetically the thoughts of the brothers.

Later he left and went to Mount Olympus. From there he went to Myra of Lycia. Then he went to Cyprus and then to Attaleia, where he crossed a river by foot that was so deep and large that one would need a boat to cross it. From there he walked to many other places, and again returned to Olympus. There he spent forty days not only fasting, but also buried to his waist in a pit. After this, without his desire, he accepted ordination to the Priesthood. Then he went to Atroas, always keeping the same spiritual struggles. He foresaw his dormition eight years before hand. And this he departed for the Lord, having clearly seen before hand all these things.
(amateur translation of Greek text from: http://www.snhell.gr/references/synaxaristis/search.asp?id=2179&search=3)


Apolytikion for a Monastic in the Fourth Tone
With the rivers of your tears, you have made the barren desert fertile. Through sighs of sorrow from deep within you, your labors have borne fruit a hundred-fold. By your miracles you have become a light, shining upon the world. O Constantine, our Holy Father, pray to Christ our God, to save our souls.
(altered from: http://goarch.org/chapel/saints_view?contentid=324)
Christ is born! Glorify Him!
Posted by Agioi_Anargyroi at 9:59 AM