St. Nicholas' role in the life of St. Stefan of Decani 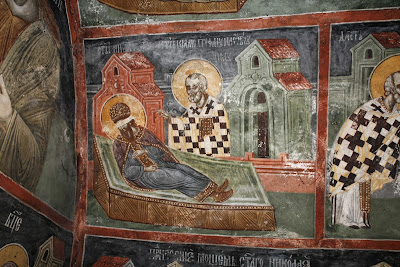 Fresco from the Patriarch of Pec depicting St. Nicholas appearing to St. Stefan of Decani in Ovce Field (taken from: http://www.srpskoblago.org/Archives/Pec/exhibits/StNicholasChurch/Altar/SouthPartOfVault/IMG_1763_l.html)
"When [St. Stephen] came of age, his parents arranged that he marry the daughter of the Bulgarian King Smilatz, and the young couple were given the land of Zeta, where they settled until such a time as Stephen would be called to succeed his father to the throne. Meanwhile, King Milutin had remarried, and his second wife, Simonide, plotted in order that their son Constantine inherit the throne. She convinced Milutin that Stephen wanted to seize the throne prematurely, and the deceived Milutin ordered that his son be captured, that he be blinded to ensure that he never again entertain such treachery, and that he be sent as a prisoner to Constantinople. The prince was taken together with his children, Dushan and Dushitzya, and when they were passing through Ovchepole (Sheep's Field), the guards took red hot pokers and blinded him. That night St. Nicholas appeared to Stephen in a dream: "Be not afraid," he said, "your eyes are in my hands." Comforted not a little by this vision, the sightless Stephen arrived in Constantinople. The Emperor Andronicus pitied the young exile, and received him graciously. He was soon settled in the monastery of Pantocrator, where he impressed the monks by his meekness and his longsuffering acceptance of the bitter trial that had come to him through his own father.
Five years passed. King Milutin was growing old. Hearing good reports about his son, his heart softened, and he called Stephen home to Serbia. Before leaving Constantinople, Stephen had a dream in which St. Nicholas appeared to him a second time, holding in his hand a pair of eyes. When he awoke, his sight was restored.

Fresco depicting St. Nicholas healing St. Stefan's blindness in Constantinople (taken from: http://www.srpskoblago.org/Archives/Pec/exhibits/StNicholasChurch/Altar/SouthPartOfVault/IMG_1762_l.html)
Three years later, his father died, and Stephen, always popular with the people, was crowned King of Serbia by the holy Archbishop Nikodim in the church at Pec. His half-brother, Constantine, resented this turn of events, and raised an army in order to wrest the throne away from Stephen. Desiring to avoid bloodshed, King Stephen addressed a letter to Constantine:

"Put far from thee thy desire to come with a foreign people to make war on thine own countrymen; but let us meet one another, and thou shalt be second in my kingdom, for the land is great enough for me and thee to live. I am not Cain who slew his brother, but Joseph who loved him, and in his words I speak to thee. Fear not, for I am from the Lord. You prepared evil for me, but the Lord has given me good, as you now see."

Constantine was unmoved and gave orders to attack. In the ensuing battle, his army was defeated and he himself was slain. 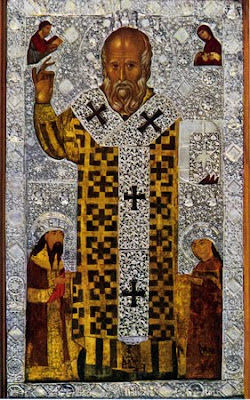 14th-Century icon of St. Nicholas donated by St. Stefan of Decani to the Church in Bari. The icon still adorns the wall of the Crypt. (taken from: http://www.stnicholascenter.org/stnic_gallery_popup.jsp?image_sakey=2390)
For the next ten years, King Stephen ruled in relative peace, and the Serbian land prospered. His son Dushan proved to be an able military leader, and was successful in battles with the Bulgarians and the Greeks, who were envious of the now powerful Serbian state and rose up against it. Grateful to the Lord for these victories, King Stephen set about with Archbishop Daniel, Nikodim's successor, to find a place to build a church. They settled upon a place called Decani, and there, in 1327, King Stephen himself laid the cornerstone for what was to become one of the most magnificent and enduring specimens of Serbian church architecture. Inside it was graced by splendid icons, to which more were added in the sixteenth century by the hand of the celebrated Slav iconographer, Longin. Saint Stephen gave generously to the needy. He also made liberal donations to churches and monasteries on the Holy Mountain, in Jerusalem, Alexandria, and to the monastery of Pantocrator in Constantinople. Nor did he forget his debt to the wonderworker Nicholas: he commissioned a silver altar and sent it together with some icons to the church in Bari, Italy, where the Saint's holy relics are located."
(taken from: http://www.roca.org/OA/128/128e.htm) 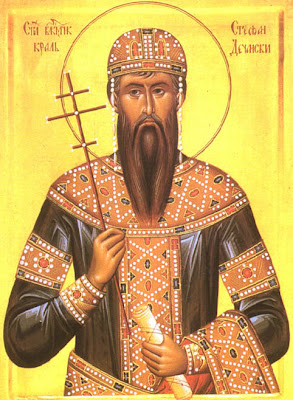 Icon of St. Stefan of Decani - Commemorated on November 11th (taken from: http://ocafs.oca.org/FeastSaintsViewer.asp?SID=4&ID=1&FSID=103284)
For the life of St. Nicholas, see: http://full-of-grace-and-truth.blogspot.com/2008/12/life-of-st-nicholas-archbishop-of-myra.html.
Through the prayers of our Holy Fathers, Lord Jesus Christ our God, have mercy on us and save us! Amen!
Posted by Agioi_Anargyroi at 6:43 AM

Labels: Lives of the Saints, Miracles, St. Nicholas the Wonderworker