St. Themistocles the Martyr of Myra in Lycia 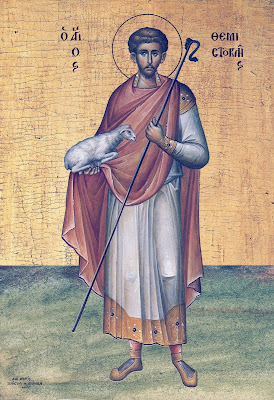 St. Themistocles the Martyr of Myra in Lycia - Commemorated on December 21st (icon taken from: http://vatopaidi.files.wordpress.com/2009/12/cf83ceaccf81cf89cf83ceb700191.jpg)
"St. Themistocles was born in Myra of Lycia in the 3rd century AD. He was a shepherd in trade and a fervent Christian full of goodness. In the mid 3rd century AD emperor Decius began a great persecution against Christians. The leader of Lycia then was Asclepius. His soldiers were searching for Christians of the area and led them to the Asclepius to try them.

One of those Christians was Dioscorides. In 250 AD the soldiers of Asclepios pursued Dioscorides who fled to the mountain where St. Themistocles was herding his sheep. He sought from help from the Saint, who naturally hid Dioscorides from his pursuers. At one point the soldiers arrived there and asked St. Themistocles if he had seen the “fugitive”. The Saint told them to stop pursuing Dioscorides and to grant him life. They told him that unless he would reveal what he knew, they would take him. And this is what happened.

The Saint was led to Asclepius’ court where he amazed those who were standing near with the goodness of his word and the wisdom of his responses. Asclepius ordered him to give up Dioscorides that he save his life and be saved from tortures which he would face. St. Themistocles, fervent Christian that he was, responded that it did not matter if they tortured or killed him. He responded that it would be his joy to witness for his faith in Jesus Christ.

Asclepius ordered them to torture the Saint and deliver him to the executioners. They stretched the Saint’s limbs and beat him in the stomach where his internal organs were. They continued to hang him from a tree in order to flay him with iron claws. The Saint from the tree said to Asclepius that on the tree (in other words the Cross) Christ was glorified and saved the world from its sins. Asclepius then ordered the death of St. Themistocles who was led by the executioners outside of the city where he was finally martyred. He was thrown onto bushes with thorns and there delivered his soul to the Creator.

The Christians of the city buried the body of St. Themistocles and “planted” the shepherd’s staff that he had, as a shepherd, next to his grave. This staff, in a miraculous manner, sprouted and became an almond tree. For many years after the death of the Saint, the almonds healed the sick. 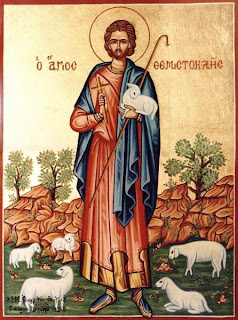 Icon of St. Themistocles the Martyr of Myra in Lycia (taken from: http://www.photosled.com/data/2422/medium/1221_themistoklis.jpg)
Apolytikion for a Martyr in the Fourth Tone
Thy Martyr, O Lord, in his courageous contest for Thee received the prize of the crowns of incorruption and life from Thee, our immortal God. For since he possessed Thy strength, he cast down the tyrants and wholly destroyed the demons' strengthless presumption. O Christ God, by his prayers, save our souls, since Thou art merciful.
(taken from: http://goarch.org/chapel/saints_view?contentid=616&type=saints)
Through the prayers of our Holy Fathers, Lord Jesus Christ our God, have mercy on us and save us! Amen!
Posted by Agioi_Anargyroi at 9:16 AM

Holy martyr St Themistocles, intercede with your fervant prayers for your namesake Themistocles. May God forgive him his sins and may he find repentance in his life and turn toward God with contrition of heart and soul.