The saving of the inhabitants of Pyrgou from the terrible threat of plague in 1860. This sickness was disbanded by St. Charalambos after fervent prayer and supplication towards him. In fact the people of Pyrgou saw an astounding sight. The Saint with a staff drove away a white cloud like cotton into the sky until he threw it into the sea. This was the sickness which the Saint banished. And in other places the presence of St. Charalambos appeared driving away the plague, such as in Thessaly in Savalia and Demetsana, where they renamed the Church of the Entrance of the Theotokos after St. Charalambos because of the wonderworking intervention of the Saint.

To St. Charalambos is attributed the deliverance from the deadly threat of influenza in 1918, from Eleia and in Greece, from which thousands of people were dying for months in Greece.

In 1687 the Turks with their terrible leader Ahmet Efendi, besieged Pyrgou. After supplications of the inhabitants to St. Charalambos, a pestiferous sickness struck the army of the Efendi and many of his soldiers died, with the result being their withdrawal from the siege and the city being saved.

In 1821 the Turks entered the port and besieged Pyrgou in an attempt to head towards Tripolitsa and to clean out the revolutionary soldiers from the area. After they burned part of the city, they tried to head towards the center road with carriages and their weapons. However, outside of the small Church of St. Charalambos a small number of committed Greek soldiers were camped, who, with the help of the Saint, drove away the large number of Turks. Then the Turks would have to take other paths for weeks to reach Tripolitsa. The only pass that remained was the heroic Pousi, where the Greeks had organized, and as a result of the delay of the Turks at Pyrgou and they gave the fatal blow to the enemy.

In the Italian bombing of 1941, a few hours before it occurred, a dense fog covered Pyrgou which resulted in the delay and eventually cancellation of the mission, and the salvation of the city. Before the Germans understood, Pyrgou had prepared for the bombing. However, none of inhabitants suffered anything, because the bombs fell in uninhabited places and many didn't go off.

On March 26th 1993, a great earthquake hit Pyrgou at 14:10, divided into two quakes of 5.5 and 5.8 on the Richter scale, separated by a three minute gap, so the damage was not terrible. This dividing of the quake was a scientific phenomenon of note. For a while before there were small vibrations at night, as a forewarning to the inhabitants to prepare for the time of the earthquake. At the hour of the quake, many small children with innocent eyes saw the “Pappou” ["Grandpa"] as they said holding the homes of Pyrgou with extended hands so that they wouldn't fall. After the earthquake many inhabitants saw St. Charalambos in their sleep relating that with his intervention the great earthquake was separated into two smaller ones, and because of this there was a procession of the icon of the Saint in the city.
(amateur translation of Greek text from: http://orthodox-world.pblogs.gr/2008/02/10-flebarh-eorth-toy-agioy-haralampoy-bios-kai-thaymata.html)

For the life of St. Charalambos, see: http://full-of-grace-and-truth.blogspot.com/2010/02/st-charalambos-hieromartyr-of-magnesia.html. 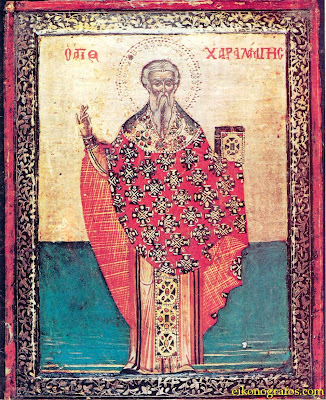 St. Charalambos the Hieromartyr (Icon courtesy of www.eikonografos.com used with permission)
Apolytikion in the Fourth Tone
O wise Haralambos, you were proven an unshakable pillar of the Church of Christ; an ever-shining lamp of the universe. You shone in the world by your martyrdom. You delivered us from the moonless night of idolatry O blessed one. Wherefore, boldly intercede to Christ that we may be saved.
(http://goarch.org/chapel/saints_view?contentid=423)
Through the prayers of our Holy Fathers, Lord Jesus Christ our God, have mercy on us and save us! Amen!
Posted by Agioi_Anargyroi at 12:25 PM