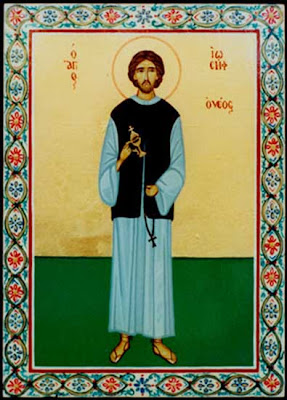 Icon of St. Joseph the New (http://christopherklitou.com/icon_4_feb_joseph_the_new.htm)
The Holy Neomartyr Joseph was from the city of Aleppo, Syria. The Turks hated him for his piety and slandered him, saying that he wished to become a muslim, but he did not. Thus they led him before the judge, who with promises and threats tried to get him to deny the faith of his fathers.

However Joseph conquered the muslim religion which he was called to embrace with spiritual manliness.

[He told the judge: “Slow down, the faith which you have you want others to believe in? O thrice-wretched people from evil roots! You find this faith and think it is true? You wretched ones don't know neither your fasting nor your bairam. You only wait to see the moon, to begin your fast or more appropriately your great feasting. You sit all night and eat until dawn and then you fall asleep all day, like those dead in the grave. And when you wake up, you look to see when the sun sets to begin again your food. Then you carefully look to see the moon, to begin your bairam. And if it happens to be cloudy, some do it earlier and some later, and the whole world is laughing with you. This is your faith which you say I should believe in?

What can I say about your other myths and unholy beliefs? That God eats and drinks, that in paradise, as you imagine it, you receive food and drink and greater immoralities than you have here...]


Apolytikion for a Male Martyr in the Fourth Tone
Thy Martyr, O Lord, in his courageous contest for Thee received the prize of the crowns of incorruption and life from Thee, our immortal God. For since he possessed Thy strength, he cast down the tyrants and wholly destroyed the demons' strengthless presumption. O Christ God, by his prayers, save our souls, since Thou art merciful.
(http://goarch.org/chapel/saints_view?contentid=397)
Through the prayers of our Holy Fathers, Lord Jesus Christ our God, have mercy on us and save us! Amen!
Posted by Agioi_Anargyroi at 5:58 AM