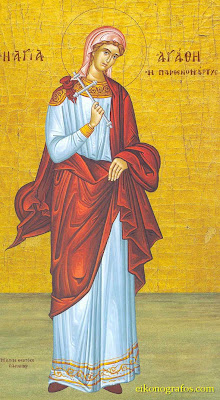 "The Holy Virgin Martyr Agatha was the fifteen-year-old daughter of rich and respected Christian parents from the city of Palermo (formerly Panormos) in Sicily. During the persecution under the emperor Decius (249-251), the city prefect of Catania, Quintianus, having heard about Agatha's wealth and beauty, sent his soldiers after her to bring her to trial as a Christian.

At Catania they housed the saint with a certain rich woman, who had five daughters. They all attempted to tempt St Agatha with fine clothes, amusements and entertainment, urging her to offer sacrifice to the pagan gods, but the saint disdained all these things. The more they tried to move her, the more resolute she became. She prayed that she might soon face martyrdom.

[The judge, seeing Agatha beautiful in countenance, desired to have her for his wife. When he suggested this, Agatha answered that she is the bride of Christ and cannot be unfaithful to her Betrothed. Quintian subjected her to cruel tortures. Agatha was ridiculed, whipped, bound to a tree and flogged until blood flowed. After that, the judge again tried to persuade her to deny Christ and to avoid any further torture and suffering. To that the bride of Christ replied: "These tortures are very beneficial for me; just as wheat cannot arrive at the granary before it is cleansed from the chaff, so my soul cannot enter into Paradise if my body, beforehand, is not humbled by tortures." (http://www.westsrbdio.org/prolog/prolog.htm)] 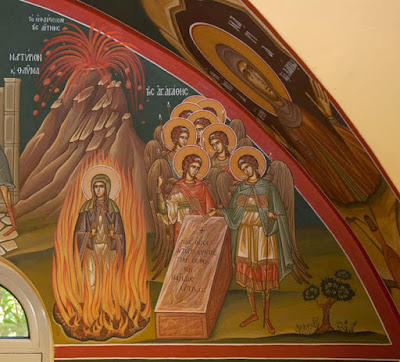 The Martyrdom of St. Agatha, with the Angels bringing the inscription to her tomb, and her protecting Sicily at the eruption of Mount Etna (source)

During her interrogation under Quintianus, the holy martyr was swayed neither by the flattery, nor by the threats, and she was subjected to cruel torments. They also tried to remove her breasts with metal tongs, and when this failed, they used knives.

The holy Apostle Peter appeared to her in prison and healed her wounds. St Agatha was led to torture again, and Quintianus was astonished to see her completely healed, with no trace of cutting. Then the torture began once more.

At this moment an earthquake took place in the city, and many buildings were destroyed. Among those killed were two of Quintianus's advisors. The terrified inhabitants rushed to Quintianus, demanding an end to Agatha's tortures. Fearing a revolt by the people, Quintianus sent St Agatha back to prison. There the martyr, offering thanks to God, peacefully surrendered her soul to the Lord [in 251 AD]." (http://ocafs.oca.org/FeastSaintsViewer.asp?SID=4&ID=1&FSID=100431)

"After her death, the torturer Quintian departed for Palermo to usurp her estate. However, along the way, his horse and the horses of his soldiers became wild with rage. Quintian was bitten on the face, thrown to the ground and trampled to death. Swift was the punishment of God that reached out for this savage crime perpetrated against St. Agatha. (http://www.westsrbdio.org/prolog/prolog.htm)" 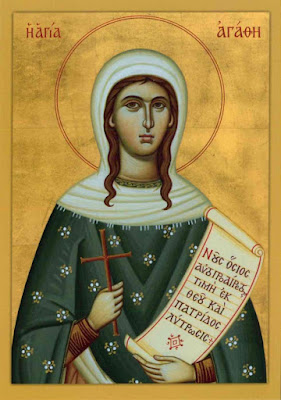 St. Agatha of Catania, her scroll hold the words written by the Angel on her tomb, listed below (source)

"At her burial, an Angel placed a stone tablet on her grave inscribed with the words, "A righteous mind, self-determining, honor from God, the deliverance of her father-land."*** The following year this was fulfilled when Mount Etna erupted, spewing forth violent fire from which Catania was manifestly saved by Saint Agatha's prayers. The holy Martyr Agatha, the protectress and chief patroness of Sicily, is, with perhaps the exception of Saint Agnes of Rome, the most highly venerated Virgin Martyr of the West. Saint Damasus, Pope of Rome, and Saint Ambrose of Milan both wrote in praise of her. (http://goarch.org/chapel/saints_view?contentid=413)"

The Martyrdom of St. Agatha (source)

***Elder Joseph of Vatopedi, in a sermon in praise of St. Agatha, comments on the meaning of such an honor from God:
But how could this little girl win such honored glory? Do you know what it means, for God to feel to confess His pleasure [ευαρέσκεια] with the work of a soul? Think over how much perfection she reached to receive this seal from the providence of God. If one assesses this, she achieved the so-called gift of salvation. Man of course must show his accord and his intention. However, he moves towards God solely out of love and neither fears nor is forced “neither from sorrow nor from need [Ανάγκη can be translated as need or danger or want]”, because the issue of need is a parasite following the Fall. Man, as lord and as an image and likeness of God, must never be relegated to any condition of need, because need reveals cowardice, weakness, imperfection, fear, uncertainty, etc. Let us flee therefore completely from the law of need, it is weak. On the subject of our intent however, because of the choice that we make we can go beyond this, with respect to our offering and sacrifice to God. Our attitude towards God, shouldn’t be from need, neither from fear, neither from self-interest. Quite simply we believe in our Christ, it is worth it; we follow Him, because He deserves it; we worship Him, because he is the center of all worship, honor and glory. Not to take Him “as our own”. What are “His own”? For He sacrificed himself for us. In these however, the only thing that we know is that His All-Goodness will grant us “Himself and of His own”, we move always from love. Thus thought and worked this small girl, this very great martyr, who is the glory of our Church, and who won the divine pleasure.
(amateur translation of Greek text from: http://vatopaidi.wordpress.com/2010/02/05/Î·-Î¿ÏÎ¸Î®-Ï€ÏÏŒÎ¸ÎµÏƒÎ·-Î¼Î½Î®Î¼Î·-Î±Î³Î¯Î±Ï‚-Î±Î³Î¬Î¸Î·Ï‚/)

St. Lucy the Virgin Martyr (December 13) hastened to St. Agatha's tomb for her mother to be healed. She not only was cured, but St. Agatha appeared to St. Lucy and foretold her martyrdom for Christ. For more, see here.

St. Agatha is also a patron and protector of women with breast diseases and breast cancer.

A portion of the Sacred Skull of St. Agatha is treasured by the Holy Monastery of St. Paul on Mount Athos. Here is a video taken from when this was brought to Aitolia for veneration.

May St. Agatha intercede for us all and help us! 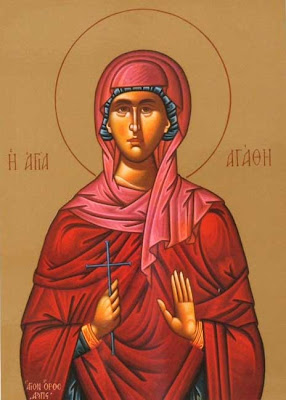 Troparion of St Agatha Tone 3
Thou wast a fragrant flower of virginity and an undefiled bride of the Lifegiver; thou didst desire the Source of all good and excel in martyrdom. O glorious Agatha, intercede by thy holy prayers for those who lovingly honour thy contest.

Kontakion of St Agatha Tone 4
Let the Church be arrayed today in glorious purple dyed with the chaste blood of the Martyr Agatha, and let us cry: Rejoice, thou boast of Catania. St. Agatha the Virgin Martyr, with scenes from her life (source)
Through the prayers of our Holy Fathers, Lord Jesus Christ our God, have mercy on us and save us! Amen!
Posted by Agioi_Anargyroi at 7:34 AM

Labels: Elder Joseph of Vatopedi, Lives of the Saints