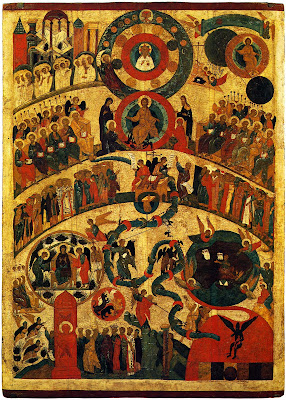 Icon of the Last Judgment (http://www.icon-art.info/masterpiece.php?lng=ru&mst_id=489)
Commentary of St. John Chrysostom on Matthew 25 (Gospel reading for Meatfare Sunday / Sunday of the Last Judgment)
"And do not account the saying to be rash. For the Lord is loving to man, and the gift cometh of His goodness. It is rash to have a mouth like the devil, to have a tongue resembling that of an evil demon, especially for him that partakes of such mysteries, and communicates of the very flesh of the Lord. Reflecting then on these things, become like Him, to the utmost of thy power. No longer then will the devil be able so much as to look thee in the face, when thou art become such a one as this. For indeed he recognizes the image of the King, he knows the weapons of Christ, whereby he was worsted. And what are these? Gentleness and meekness. For when on the mountain Christ overthrew and laid low the devil who was assaulting him, it was not by making it known that He was Christ, but He entrapped him by these sayings, He took him by gentleness, he turned him to flight by meekness. Thou also must do this; shouldest thou see a man become a devil, and coming against thee, even so do thou likewise overcome. Christ gave thee also power to become like Him, so far as thy ability extends. Be not afraid at hearing this. The fear is not to be like Him. Speak then after His manner, and thou art become in this respect such as He, so far as it is possible for one who is a man to become so. 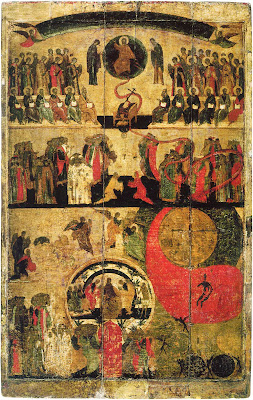 Last Judgment (http://www.icon-art.info/hires.php?lng=ru&type=1&id=1323)
Through the prayers of our Holy Fathers, Lord Jesus Christ our God, have mercy on us and save us! Amen!
Posted by Agioi_Anargyroi at 11:49 AM