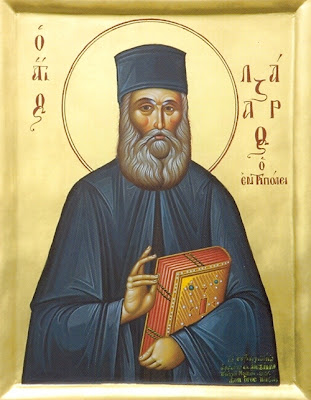 St. Lazarus the New Hieromartyr of Tripoli (+1605) - Commemorated on February 23 (http://vatopaidi.files.wordpress.com/2010/01/agios-neos-ieromartys-lazaros-ek-tripoleos.jpg)
Brief life of the Saint (amateur translation)
The first written record that we have of the martyrdom of the Holy new hieromartyr Lazarus is that from Codex no. 797 of the Holy Monastery of Vatopedi, which preserves the service and the life of the Saint....

Who in reality remains unmoved when he hears of his life? He astonished the whole city with his enthusiasm, with the purity of his thoughts and his fiery faith, with his self-denial and sacrifice. He was a priest from the region of Tripoli. His pious parents, Nicholas and Alexandra, raised him with care and education in the Lord, leading him to perfect measures of virtue.

When he was ordained a priest, he taught the pious people of the area, others he instructed to not be unjust to the poor. Someone from the city named Seletos, committed daily injustices. To him, truly righteous priest Lazarus constantly advised to not be unjust to others. When Seletos was condemned to death for the crimes he had done, he denied Christ to escape punishment. Then, having become a muslem and escaped danger, with the other Turks he desired to seize St. Lazarus and to make him convert. They slandered him many times and led him to the place of judgment, telling him that if he would convert, they would give him many good things, and otherwise, they would kill him. The Saint denied the evil offer of the faithless, who decided to torture him in many ways common to the other neomartyrs, such as beatings, disfiguring limbs, cutting off body parts, injuries and many other things. In the end, seeing the unyieldingness of the martyr, they threw him into the fire, where the Saint surrendered his blessed soul in prayer.

It is worthy to note that his mother strengthened him, telling him to endure the temporary pain of the fire, that he might inherit the eternal Kingdom and rejoice with the other martyrs, the angels, archangels, prophets, and all of the Saints.

In this way the holy new hieromartyr Lazarus completed his life. As for those faithful and unfaithful standing by, they were astonished, and with fear confirmed how light from heaven shone at the place of martyrdom of the Saint for three days straight. Later, some pious Christians collected the relics and the rope of the Saint, which heal those who call upon the Saint in faith.


Apolytikion of the Saint in the Plagal of the First Tone (amateur translations below)
Righteous-athlete and martyr of the Most-High, O Lazarus, who quenched the fire of the furnace with streams of your precious tears, in this last days, as the bright light of Mantineias, and the super-bright lamp of Tripoli, and he seek your grace, we who are burning with the fire of passions.

Kontakion in the Second Tone
From the dogmas of your words, O Lazarus, utterly conquer those against us, for rule was give to you by God, and you confirm the faith in all things, for he was truly the support.