All Saints of Lesvos (Mytilene), Greece

I thought to begin a series of posts, each highlighting a region of the world and its local Saints. As is clear, the light of Christ has reached the farthest reaches of the earth, and thus, there is not one area which has not produced, as fruit of the Holy Spirit, Orthodox Saints. Lesvos is apparently one of the largest islands of Greece, and I happened to come across much information online about the numerous Saints that have shone from it. Also note, if you are have a preference for information about Saints from a region of your interest, please post to let me know, and I will do what I can to provide what info I can gather online. May Christ have mercy on us all and save us, through the prayers of our Holy Fathers! 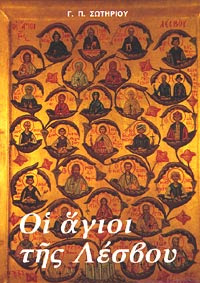 The holy island of Lesvos, besides giving rise to men of the spirit, of the arts and of the sciences, through the blessing of God has revealed at least 40 Saints, who adorn and make radiant the Orthodox calendar of our Church. Some of them were from Lesvos, who lived godly lives and fell asleep in the Lord or were martyred on the island. Others were from other places, but came to Lesvos, where they were martyred, and hallowed the ground through their martyrical blood.
Every year, the memory of All Saints of Lesvos is celebrated the Sunday after the Sunday of All Saints with all radiance and devotion, and is proceeded by a series of festal events, in which the pious people of Lesvos and many visitors to the island, take part.
Older Saints of Lesvos (20)
New Martyrs of Lesvos (20)
(A total of 40 Saints)
(taken from: http://leimwnas.blogspot.com/2011/06/26-2011.html and http://www.immyt.net/saints/default.htm) 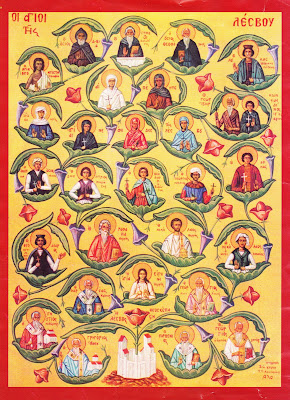 Through the prayers of our Holy Fathers, Lord Jesus Christ our God, have mercy on us and save us! Amen!
Posted by Agioi_Anargyroi at 5:39 AM