St. Nikephoros the Martyr of Antioch 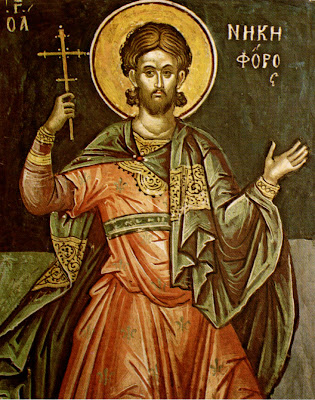 St. Nikephoros the Martyr of Antioch - Commemorated February 9 (http://pravicon.com/images/sv/s1531/s1531001.jpg)
This Martyr, who was from Antioch in Syria, contested during the reign of Gallienus, about the year 260. Through the working of the evil one, his friendship with a certain Christian priest named Sapricius was turned to bitter hatred. Nicephoros, repenting of his enmity, tried both through intermediaries and in person to be reconciled with Sapricius, but to no avail. Later, when the persecution broke out under Valerian and Gallienus, Sapricius was seized as a Christian. When Saint Nicephoros learned that Sapricius had been arrested by the pagans and was enduring torments for Christ, he sent intermediaries to Sapricius, begging his forgiveness; but Sapricius would not forgive him. Later, as Sapricius was being taken to beheading, Nicephoros, hoping that Sapricius, at his end, in such a holy hour, would at last forgive him, met him on the way, fell before him, and fervently asked his forgiveness; but Sapricius forgave him not. Wherefore, though Sapricius had passed through many sufferings, and the crown of martyrdom was now awaiting him, because he disdained the chief commandments of love and forgiveness, the grace of God, which had been strengthening him in his torments, departed from him, and he told his executioners he would sacrifice. Nicephoros immediately confessed Christ before them, and being himself beheaded, took the crown that Sapricius had cast away.
(http://www.goarch.org/chapel/saints_view?contentid=422&type=saints&date=2/9/2012&D=TH) 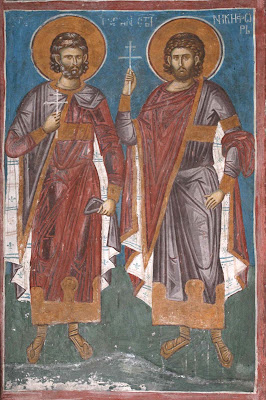 Apolytikion in the Fourth Tone
Thy Martyr, O Lord, in his courageous contest for Thee received the prize of the crowns of incorruption and life from Thee, our immortal God. For since he possessed Thy strength, he cast down the tyrants and wholly destroyed the demons' strengthless presumption. O Christ God, by his prayers, save our souls, since Thou art merciful.
Kontakion in the Third Tone
Bound fast with chains of love, thou didst mightily sunder the wickedness of hatred with manifest courage, and hence, O Nicephoros, when the sword had cut off thy head, thou wast shown to be a godly Martyr of Jesus, our Incarnate Saviour; pray Him for us who honor thy glorious memory.
(http://www.goarch.org/chapel/saints_view?contentid=422&type=saints&date=2/9/2012&D=TH)
Additional Apolytikion in the Fourth Tone (amateur translations below)
Being illumined with the love of the Creator, you truly fulfilled the law of grace, and thus you were spiritually reborn. Therefore, having loved your neighbor as yourself, you struggled, O Nikephoros, and deposed the enemy; keep us in harmony.

Megalynarion
Full of love towards God, O blessed one, you loved your neighbor as yourself. Therefore you also struggled, and deposed the worker of hate, O Nikephoros, taking refuge in Christ.
Through the prayers of our Holy Fathers, Lord Jesus Christ our God, have mercy on us and save us! Amen!
Posted by Agioi_Anargyroi at 6:28 AM

Labels: Forgiveness, Lives of the Saints