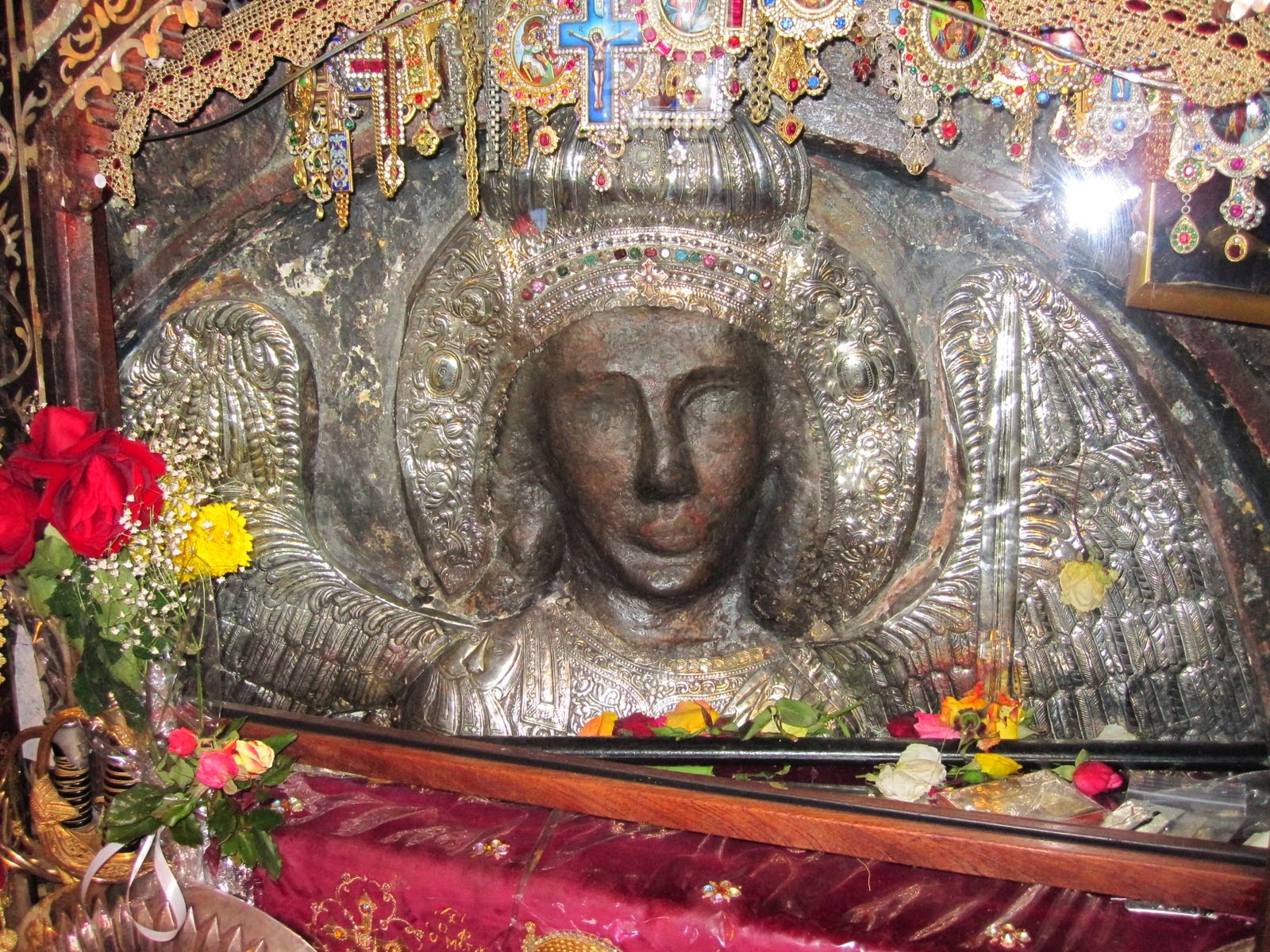 The wondrous icon of the Holy Archangel Michael, Mantamados, Mytilene (Lesvos) (source)
Note: The Sunday of the Holy Myrrhbearers is one of the major feasts of the Holy Archangel Michael the Taxiarch, Mantamados, Mytilene (Lesvos). This is because that church was consecrated on this day. Thousands of pilgrims flock to celebrate this feast, seek the intercessions of the great Taxiarch, and thank him for his prayer and his protection, for "Where your grace casts its shade, Archangel, there the devil’s power is chased away; for the fallen Morning Star cannot endure in your light." (source) May he intercede for us all and protect us!
Miracles of the Archangel Michael the Taxiarch to Mother Stavritsa the Missionary (+2000)
My name is Stavritsa Zachariou, and I am a Greek American. In 1969 I went to Africa as a missionary. I am 75 years old, and 15 years I spent in Africa, near our suffering brothers, sowing the seed of the Gospel. I stay by myself in Nairobi, Kenya, and from there I go to Kampala, Cameroon, and other places, where the seed of the Gospel of Christ needs to be sowed.

I am a missionary of the Archdiocese of America. With the help of God and of benefactors, we built 12 holy Churches in [Africa]. We built the 10th holy church in honor of the Archangel Michael, and I wanted to paint his icon from the prototype from the north gate of the Patriarchate. As I was finishing the icon, when I went to the post office, I received a letter from Fr. Soterios Trampa. I know Archimandrite Fr. Soterios, who was a missionary for many years in Korea, and who also served as a preacher of your Metropolis, along with Chancellor of the Archdiocese of Athens from 1968-1973. In his letter was a small booklet on the Taxiarch of Mantamados. Then I learned about Mantamados, and the bas-relief icon of the Archangel Michael. Fr. Soterios wrote: “I am sending you the information on the Taxiarch of Mantamados, that you might come to know his wondrous icon. Within this you will see one of his many miracles, which occur daily to the glory of God. I served there in the past, and I especially honor him...” 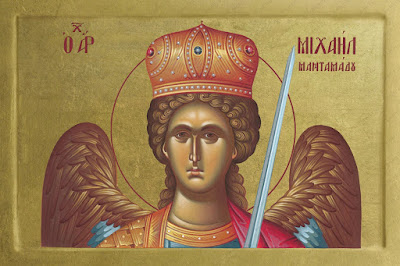 I began to read the booklet on the Taxiarch, including the miracle of the sword. As I continued reading, I reached the place regarding the passing of the sword from some unknown person to Mr. Diamante, when there was as if some marked commotion in the icon [that she had painted]. I turned around to see what was happening then and, O my God!!!! The Archangel of the icon began to come to life, to take on flesh and bones! I was astonished! I knelt before it and began to pray with tears and to ask for his help and his protection. After a short while, slowly the icon began to return to its natural state.

I was supposed to go for a trip to Kampala. I always thought that when I would go on some trip, that I should take with me the icon of some Saint from my icon corner. That time, I took with me the little icon of the Taxiarch of Mantamados.

We reached the border of Kampala and Kenya, and Kampala at that time (1988) had a military regime. When we speak about a military regime in the center of Africa, it means that human life is cheaper than the life of a blackbird!

As we were passing through, my driver (a Kenyan and my Koumbaro) did not notice that at one place there was a stop sign and he kept going. Five wild motorcyclists surrounded us. They got off their motorcycles, drew their weapons, and knelt, preparing to fire at us and to take our car and our possessions as spoil. That is what usually occurred there...

Then, I don't know what strength was within me, but I opened the door of the car..I exited with the icon of the Taxiarch in my hands, and approached them, crying out:
“For God's sake, stop! I have with me the Taxiarch of God, who is dark-colored like you, come see him!!!”

Automatically, it was as if someone grabbed them by the hands. They calmed down, left their weapons in the grass, and ran up to me, took the icon, like something holy and venerable, and began to examine it carefully and to shout. They bowed their faces to the ground and holding my hands, they asked for forgiveness. Then I saw that one of them was injured badly in the hand by a knife. I took my first aid kit from the car, nursed the wound and dressed it. We became friends! The most impressive thing is that, there was sown the word of God, and the five of them received Christ, and became Christians!

After all of this, I promised to the Archangel to come to Greece, to Mantamados, to thank him. And today, I feel very blessed that the Lord made me worthy to fulfill my promise. I thank Him from all my heart!

(Amateur translation of text, from Protopresbyter Eustratios Dessou, “The History and Miracles of the Taxiarch of Mantamados,” Volume II, pg. 158. http://antexoume.wordpress.com/2013/11/08
http://www.pentapostagma.gr/2013/11) 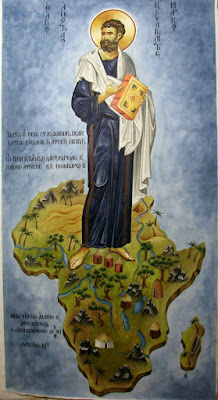 The Holy Apostle and Evangelist Mark, depicted as the Apostle and Missionary bringing Christ's Gospel to Africa (source)
Christ is risen from the dead, by dead, trampling down upon death, and to those in the tombs, He has granted life! Truly the Lord is risen!
Posted by Agioi_Anargyroi at 9:55 AM

Not everyone is called to be a missionary in a far away land, and not all to the same place, but Mother Stavritsa was called by the Lord to Africa, and as you can see, her love and faith in the Lord bore much fruit.