Excerpt from the Homily on the Raising of Lazarus by St. Amphilochius of Iconium 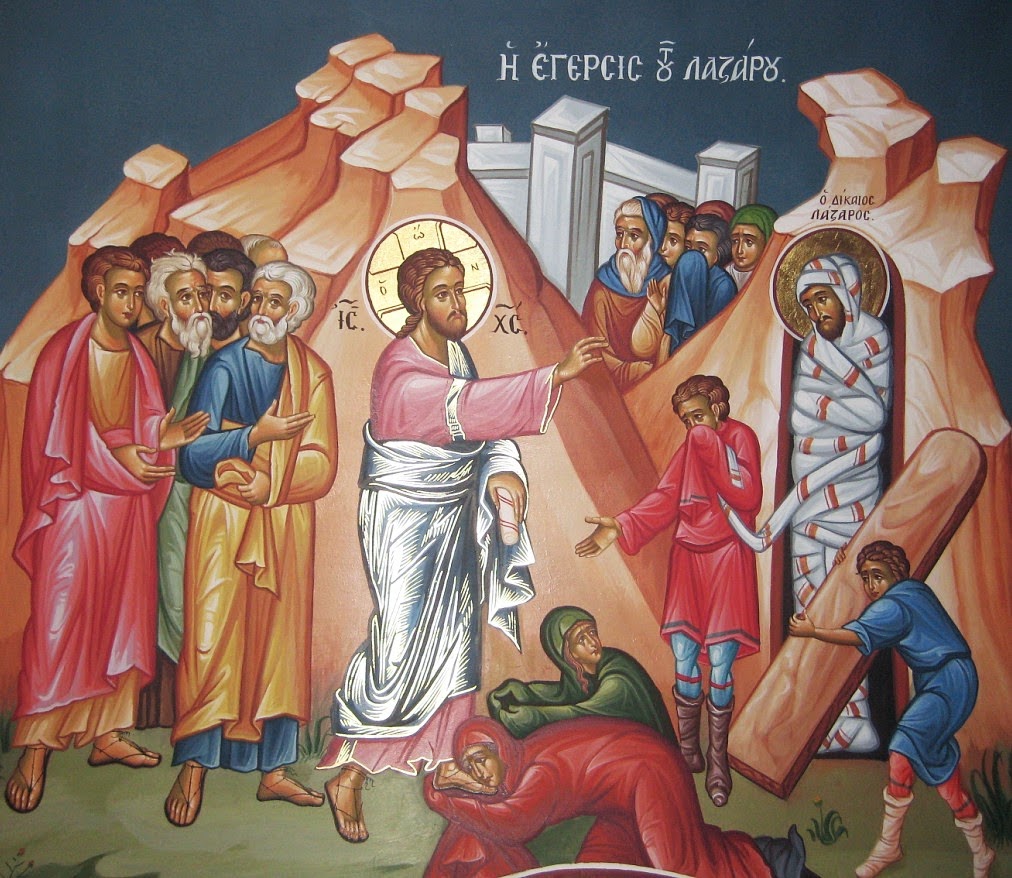 The Raising of Lazarus (source)

Excerpt from the Homily on the Raising of Lazarus by St. Amphilochius of Iconium (amateur translation)

Bring the Evangelist John once again into our midst,
For it is good to relate of the beginning of the Resurrection.
For you heard when he perfectly said:
“Six days before the Passover, Jesus came to Bethany, where Lazarus was, whom He raised from the dead.”

Do you see that the beginning of the Resurrection is depicted before-hand with Lazarus, whom the whole multitudes of the faithful knew?

The multitudes knew him, and the chief priests reviled the wondrous work, transforming it into guile. Truly, they reviled the resurrection of Lazarus, because after his resurrection, as you have heard, they took counsel together to put him to death.

Do you see this utter guile?

He whom the Lord raised, him they thought to put to death, not understanding that even if they would put him to death, again the Lord could have resurrected His friend.

They took counsel together to put Lazarus to death.

Nothing had astonished the Judeans like the resurrection of Lazarus. This wonder alone they were unable to slander.

They slandered the sight of the man born blind, saying that it wasn't him, but it was someone like him.

They slandered the raising of the daughter of Jairus, saying that she was passed out, not totally dead.

They slandered the resurrection of the son of the widow [of Nain] saying that he appeared to be dead, not that He had taken him from the tyranny of death.

They slandered the withered fig tree, saying that it was picked clean, and not that the word of the Master had withered it.

They slandered the transformation of the water into wine, saying that those at the dinner were drunk, and did not see that they were joking.

Only the resurrection of Lazarus were they unable to slander.

They knew who Lazarus the man was. They followed in his funeral, they saw his tomb sealed, they and they talked about him at supper with Martha and Mary, the sisters of Lazarus.

They knew that he laid in the tomb for exactly four days, and that a person four-days-dead always began to have his flesh decompose, his bones rot, his nervous system dissolve, his internal organs separate, and his belly to become bloated.

This they kept in mind when they saw that Lazarus had been resurrected, and was complete, perfect as if from a lathe, standing in his former biological state, and they were astonished...
(source)

Through the prayers of our Holy Fathers, Lord Jesus Christ our God, have mercy on us and save us! Amen!
Posted by Agioi_Anargyroi at 12:01 PM

Labels: Miracles, St. Amphilochius of Iconium, The Raising of Lazarus, Writings of the Saints