Excerpt from the Third Theological Oration of St. Gregory the Theologian 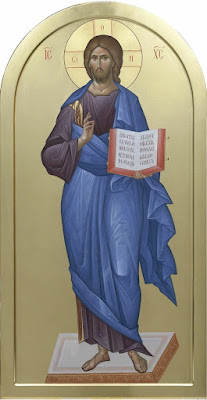 For He Whom you now treat with contempt was once above you. He Who is now Man was once the Uncompounded. What He was He continued to be; what He was not He took to Himself. In the beginning He was, uncaused; for what is the Cause of God? But afterwards for a cause He was born. And that cause was that you might be saved, who insult Him and despise His Godhead, because of this, that He took upon Him your denser nature, having converse with Flesh by means of Mind. While His inferior Nature, the Humanity, became God, because it was united to God, and became One Person because the Higher Nature prevailed in order that I too might be made God so far as He is made Man. He was born — but He had been begotten: He was born of a woman— but she was a Virgin. The first is human, the second Divine. In His Human nature He had no Father, but also in His Divine Nature no Mother. Both these belong to Godhead. He dwelt in the womb — but He was recognized by the Prophet, himself still in the womb, leaping before the Word, for Whose sake He came into being. He was wrapped in swaddling clothes Luke 2:41 — but He took off the swathing bands of the grave by His rising again. He was laid in a manger— but He was glorified by Angels, and proclaimed by a star, and worshipped by the Magi. Why are you offended by that which is presented to your sight, because you will not look at that which is presented to your mind? He was driven into exile into Egypt— but He drove away the Egyptian idols. He had no form nor comeliness in the eyes of the Jews Isaiah 53:2 — but to David He is fairer than the children of men. And on the Mountain He was bright as the lightning, and became more luminous than the sun, Matthew 17:2 initiating us into the mystery of the future.
XX. He was baptized as Man — but He remitted sins as God — not because He needed purificatory rites Himself, but that He might sanctify the element of water. He was tempted as Man, but He conquered as God; yea, He bids us be of good cheer, for He has overcome the world. John 16:33 He hungered — but He fed thousands; yea, He is the Bread that gives life, and That is of heaven. He thirsted — but He cried, If any man thirst, let him come unto Me and drink. Yea, He promised that fountains should flow from them that believe. He was wearied, but He is the Rest of them that are weary and heavy laden. Matthew 11:28 He was heavy with sleep, but He walked lightly over the sea. He rebuked the winds, He made Peter light as he began to sink. He pays tribute, but it is out of a fish; yea, He is the King of those who demanded it. John 19:19 He is called a Samaritan and a demoniac; — but He saves him that came down from Jerusalem and fell among thieves; the demons acknowledge Him, and He drives out demons and sinks in the sea legions of foul spirits, Luke 8:28-33 and sees the Prince of the demons falling like lightning. He is stoned, but is not taken. He prays, but He hears prayer. He weeps, but He causes tears to cease. He asks where Lazarus was laid, for He was Man; but He raises Lazarus, for He was God. John 11:43 He is sold, and very cheap, for it is only for thirty pieces of silver; Matthew 26:15 but He redeems the world, and that at a great price, for the Price was His own blood. 1 Peter 1:19 As a sheep He is led to the slaughter, Isaiah 53:7 but He is the Shepherd of Israel, and now of the whole world also. As a Lamb He is silent, yet He is the Word, and is proclaimed by the Voice of one crying in the wilderness. John 1:23 He is bruised and wounded, but He heals every disease and every infirmity. Isaiah 53:23 He is lifted up and nailed to the Tree, but by the Tree of Life He restores us; yea, He saves even the Robber crucified with Him; Luke 23:43 yea, He wrapped the visible world in darkness. He is given vinegar to drink mingled with gall. Who? He who turned the water into wine John 2:1-11, who is the destroyer of the bitter taste, who is Sweetness and altogether desire. Song of Songs 5:16 He lays down His life, but He has power to take it again; John 10:18 and the veil is rent, for the mysterious doors of Heaven are opened; the rocks are cleft, the dead arise. Matthew 27:51 He dies, but He gives life, and by His death destroys death. He is buried, but He rises again; He goes down into Hell, but He brings up the souls; He ascends to Heaven, and shall come again to judge the quick and the dead, and to put to the test such words as yours. If the one give you a starting point for your error, let the others put an end to it.
-St. Gregory the Theologian, Excerpt from his Third Theological Oration
(source) 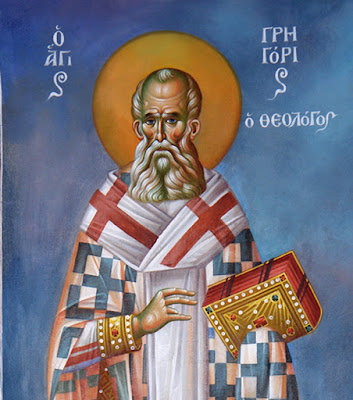 
Through the prayers of our Holy Fathers, Lord Jesus Christ our God, have mercy on us and save us! Amen!
Posted by Agioi_Anargyroi at 6:14 AM