Selected hymns to St. Ieronymos of Simonopetra,
translated from the Greek service in his honor, written by Metropolitan Joel of Edessa
(note, hymns not set to match the meter)


Apolytikion in the Plagal of the First Tone.
The adornment of the Athonite Fathers, and the root of the Sacred Cenobium of Simonopetra, you have been shown to be in these latter days, O Ieronymos, for you have risen as a light in the city of Athens, illumining the multitudes of the faithful, and do not cease to intercede on behalf of us who hymn you.


Kontakion in the Plagal of the Fourth Tone.
As a most exact imitator of the Venerable Saints, and Abbot of Athos, Ieronymos, the faithful praise you from their heart, for you lived in Athens like an angel, and guided many to the Savior. Therefore, we cry out to you: Rejoice, O all-famed Father.


Synaxarion
On the 9th of this month (May), the memory of our Venerable Father Ieronymos of Simonopetra, who reposed in Athens on the 6th of January, and as this day is the glorious feast of Theophany, his feast is transferred to this day [the translation of his Holy Relics.]


Verses
O Ieronymos, remember all of those,
Who praise your memory in hymns.

This, our new Venerable Father Ieronymos of Simonopetra, was born in 1871 in Reis-Dere of Asia Minor to pious parents  Nicholas and Maria, who raised him, teaching him the law of the Lord. At a young age, he entered the cenobium of Simonopetra on Mount Athos, and was discerned there for his humility, his prayer and his obedience. He was made Abbot of this uplifted Monastery of the Venerable Simon. He was known for his asceticism and his virtue of discernment. When he later resigned the Abbacy, he was placed at the Metochion of the Divine Ascension in Vyrona of Athens. He was a man of prayer, worship and almsgiving. He showed signs of the prophetic charism. He reposed in the Lord venerably in Athens on December 24th of the Old Calendar, and January 6th of the New Calendar in 1957. He showed forth many signs of holiness, both to those asleep and awake. His feast is translated to the 9th of May, which was the day of the translation of his Holy Relics.


Megalynarion
Rejoice, you who underscored asceticism, the pride of Athos, the joy of the Athenians. Rejoice, the radiant vessel of the Venerable, and the Abbot of the Monastery of Simon, O Ieronymos.
(source) 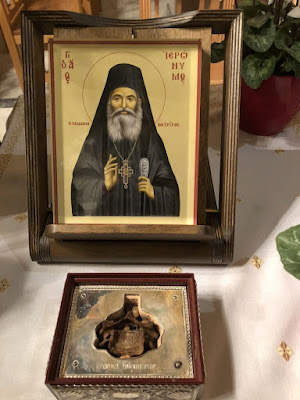 The Sacred Icon and Relics of St. Ieronymos of Simonopetra, treasured by the Holy Dependency of the Ascension of Christ, Vyrona, Athens, where the Saint served for many years and later reposed (source)


Through the prayers of our Holy Fathers, Lord Jesus Christ our God, have mercy on us and save us! Amen!
Posted by Agioi_Anargyroi at 6:22 AM