"Then he took the mantle of Eli'jah that had fallen from him, and struck the water..." 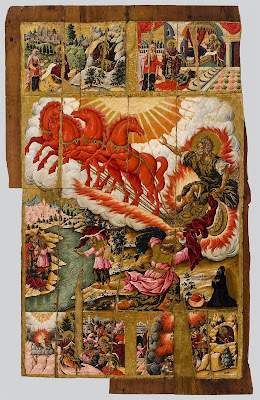 Prophet Elias ascending in the fiery chariot, and Prophet Elisha striking the Jordan with his mantle (source)

Then Eli'jah said to him, "Tarry here, I pray you; for the LORD has sent me to the Jordan." But he said, "As the LORD lives, and as you yourself live, I will not leave you." So the two of them went on. Fifty men of the sons of the prophets also went, and stood at some distance from them, as they both were standing by the Jordan. Then Eli'jah took his mantle, and rolled it up, and struck the water, and the water was parted to the one side and to the other, till the two of them could go over on dry ground. When they had crossed, Eli'jah said to Eli'sha, "Ask what I shall do for you, before I am taken from you." And Eli'sha said, "I pray you, let me inherit a double share of your spirit." And he said, "You have asked a hard thing; yet, if you see me as I am being taken from you, it shall be so for you; but if you do not see me, it shall not be so." And as they still went on and talked, behold, a chariot of fire and horses of fire separated the two of them. And Eli'jah went up by a whirlwind into heaven. And Eli'sha saw it and he cried, "My father, my father! the chariots of Israel and its horsemen!" And he saw him no more. Then he took hold of his own clothes and rent them in two pieces. And he took up the mantle of Eli'jah that had fallen from him, and went back and stood on the bank of the Jordan. Then he took the mantle of Eli'jah that had fallen from him, and struck the water, saying, "Where is the LORD, the God of Eli'jah?" And when he had struck the water, the water was parted to the one side and to the other; and Eli'sha went over.
II Kings 2:6-14, read at Great Vespers for Theophany 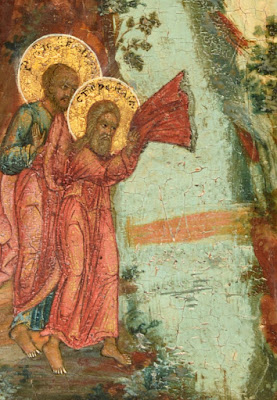 Prophet Elias striking the Jordan with his mantle (source)


Through the prayers of our Holy Fathers, Lord Jesus Christ our God, have mercy on us and save us! Amen!
Posted by Agioi_Anargyroi at 5:24 AM