On the Nativity of Christ: the Catechesis of St. Theodore

The following is the Catechesis 32 from St. Theodore the Studite, titled: "On the Nativity of the Saviour and the vigorous pursuit of our ascetic life", as translated by Fr. Ephraim and taken from: http://www.anastasis.org.uk/ths32.htm . It is traditionally read after the First of the Royal Hours for Christmas. 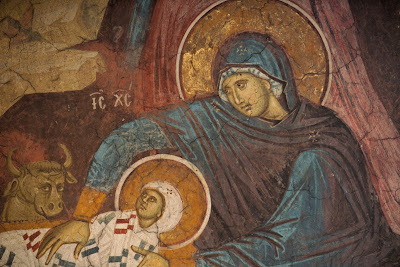 Detail of the Infant Christ and the Theotokos from a fresco of the Holy Nativity of Christ from Decani Monastery (taken from: http://www.srpskoblago.org/Archives/Decani/exhibits/Collections/GreatFeasts/CX4K1562.html)
St. Theodore the Studite - CATECHESIS 32: "On the Nativity of the Saviour and the vigorous pursuit of our ascetic life.
Brethren and Fathers, already the Manifestation of God is near and the day of joy is at the doors; for it is a great joy, such as has not been since time began, that the Son of God has come to us, not through riddles and symbols, as he appeared of old to the fathers, but by coming to live with us and manifesting himself in his own person through his birth from a Virgin. There has been nothing more blest than this in generations of generations, nothing more wonderful among all the wonders that God has done since time began. For this reason Angels are proclaiming the good tidings of the mystery and a star revealing that the heavenly has been brought to birth on earth; for this reason Shepherds are running to see the salvation that has been proclaimed, and Magi are bringing gifts fit for a king; for this reason a new song is being sung for new events, because God, who is glorified in the highest, has appeared as peace on earth. And the Apostle bears witness when he says, For he is our peace, who has made both one, breaking down the middle wall of partition, the hostility between us, in his flesh. He has abolished the law with its commandments and ordinances, that he might create in himself one new humanity in place of two, thus making peace, and might reconcile both to God in one body through the Cross, thus putting to death that hostility through it. This is what the prophets and the just since time began desired to see, but did not see except through faith; while we have both seen and our hands have touched, as it is written, concerning the Word of life, and this life has been revealed, and we have received sonship. But what shall we give in return for all that the Lord has given to us? Already holy David anticipated and cried out the answer. I shall take the cup of salvation and call on the name of the Lord. So then let us rejoice, brethren, because we have been granted to give the Lord a return for all that he has given us. And what is this return? The cross-bearing way of life that we have taken on, and the confession in which we stand and we boast in our hope of the glory of God. And this is confessedly a witness. Meanwhile it is not for us to feast for just one day, but throughout our life; just as those who are governed by the flesh and in thrall to the passions are unable to feast, even if they seem to feast, nor are they at liberty, for they are slaves of the passions sold under sin. Indeed it is written, Everyone who sins is a slave of sin; but the slave does not abide in the house for ever. The son abides for ever. Since then we too have been granted to have been called sons according to grace, we remain in the house for ever, if we hold firm the beginning of our undertaking to the end. And so, empowered by the Holy Spirit, let us still hold to our monastic state, and let us consider how to provoke one another to love and good deeds, to obedience, to humility, to meekness, and let us be eager for everything which is of the best, not weakening in our resolve, but straining ever more and more, and the more so as we see the day drawing near. For the great and manifest day of the Lord is drawing near, on which the judge of all will be revealed and will appear in the glory in which he appeared to the Apostles at his divine Transfiguration, as he brings and judges every creature and rewards each according to its work. But may it be given to us too, with all the saints, to see him looking upon us with a kindly face and taking us into the kingdom of heaven, by the grace and pity and love for mankind of our Lord Jesus Christ, to whom are due glory, honour and worship with the Father and the Holy Spirit, now and always and to the ages of ages. Amen."

Through the prayers of our Holy Fathers, Lord Jesus Christ our God, have mercy on us and save us! Amen!
Posted by Agioi_Anargyroi at 9:04 PM

Labels: Great Feasts, St. Theodore the Studite, The Nativity of Christ, Writings of the Saints

Saw your blog listed as a favorite on 'monomakh' 's profile...I'm not Catholic, monastic etc., so I'll need to work at getting through those parts, but your blog title says it all. Thank you.