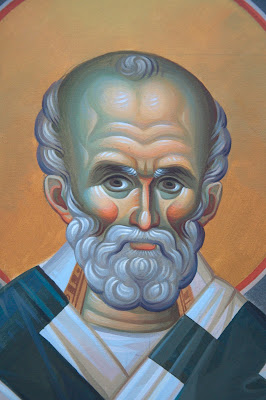 More details from the life of St. Nicholas not included in the main post (taken from http://www.hismercy.ca/content/ebooks/The.Life.of.St.Nicholas.the.Wonderworker.pdf)


"So St. Nicholas tended the flock entrusted to him, the rational sheep of Christ. But the envious evil serpent, never ceasing to incite war against the servants of God and not enduring the flourishing of piety among the people, raised persecution against the Church of Christ through the impious emperors Diocletian and Maximtan.[13] At this same time, from these emperors an order was sent all over the empire that Christians must renounce Christ and worship idols. Those who did not submit to this order were compelled to it by confinement in prison and severe tortures and, finally, given over to execution. This storm breathing evil, by the fervor of the zealots of darkness and ungodliness, soon reached also the city of Myra. The blessed Nicholas, who was the leader of all Christians in this city, freely and boldly preached the piety of Christ and was ready to suffer for Christ. For this he was seized by impious torturers and confined in prison together with many Christians. He remained not a little time, bearing severe suffering, enduring hunger and thirst and an overcrowded dungeon. He led his fellow prisoners on the word of God and quenched their thirst with the water of piety; confirming in them faith in Christ God, strengthening them on an indestructible foundation, he persuaded them to be firm in the
confession of Christ and to suffer eagerly for the truth. 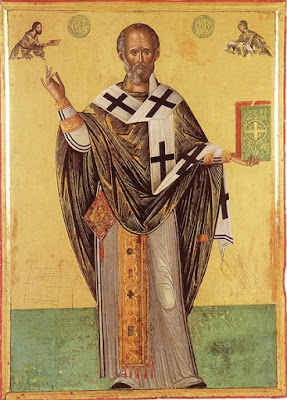 
By this time Christians again were given freedom, and piety shone forth, like the sun alter dark storm clouds, and like some calm coolness after a storm. For Christ the Lover of mankind, looking upon His inheritance, annihilated the ungodly, casting down Diocletian and Maximian from the imperial throne and destroying the power of the adherents of Hellenic impiety. By the
appearance of His Cross to Constantine the Great, to whom He was pleased to entrust the kingdom of Rome, the Lord God "raised up a horn of salvation"[14] for His people. The Emperor Constantine, recognizing the One God and placing all his hope in Him, conquered all his enemies by the power of the precious Cross and ordered all temples of idols to be destroyed and Christian temples to be restored, and dispelled the vain hopes of his predecessors. He liberated all confined in prisons for Christ, and honoring them with great praises as courageous warriors, returned these confessors of Christ each to his fatherland.


At this time also the city of Myra again received its shepherd, the great bishop Nicholas, who had been deemed worthy of the crown of martyrdom. Bearing in himself the Divine grace, he, as before, healed the passions and ailments of people, and not only of the faithful, but also the unbelievers. Because of the great grace of God that dwelt in him, many glorified him and were astonished at him and all loved him. For he shone with purity of heart and was endowed with all the gifts of God, serving his Lord in holiness and righteousness.


At that time there remained still many Hellenic temples, to which impious people were attracted by devilish suggestion and many inhabitants of Myra remained in perdition. The archbishop of the Most High God, animated by Divine zeal, visited all these places, destroying and turning into dust the temples of the idols and purifying his flock from diabolical defilement. Thus fighting with evil spirits, St. Nicholas came to the temple of Diana,[15] which was very large and richly adorned. presenting an agreeable dwelling for demons. St. Nicholas destroyed this polluted temple, leveled its high edifice to the ground and the very foundation of the temple, which was in the earth, he scattered in the air, taking up arms more against the demons than against the temple itself. The evil spirits, not enduring the arrival of the servant of God, uttered doleful cries, but, vanquished by the weapon of prayer of the unconquerable warrior of Christ, St. Nicholas, they were forced to flee from their habitation." 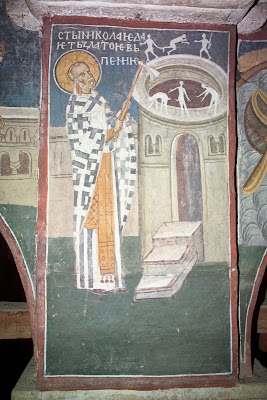 Fresco of St. Nicholas tearing-down the temples of the idols, from Decani Monastery (http://www.srpskoblago.org/Archives/Decani/)
Posted by Agioi_Anargyroi at 2:17 PM

Labels: Lives of the Saints, St. Nicholas the Wonderworker

Great testimony - we need to be doing more such things today, pulling down the alters of immorality and idolatory !!