St. Angelis the Neomartyr, the Physician of Argos 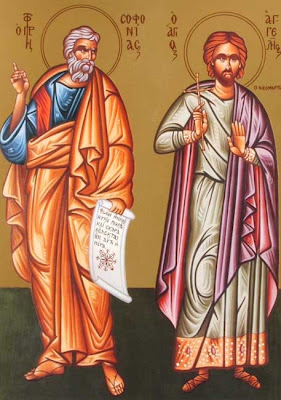 Icon of the Prophet Zephaniah and St. Angelis the New Martyr, the Physician of Argos (+1813) - Commemorated on December 3rd (taken from: http://christopherklitou.com/icon_3_dec_zephaniah_prophet_angeles_newmartyr_of_argos.htm)

(The following is an amateur translation/summary of Greek text from http://www.synaxaristis.googlepages.com/3δεκεμβριου, and Witnesses for Christ by Vaporis, the latter of which is an excellent book with translations of the lives of many Neomartyrs for Christ under the Ottoman Turks)
Fervent, silent, and obedient was the pious Angelis, who took up medicine as his profession in Argos [Greece]. In a religious debate with a Frenchman, he sought to defend the Christian faith by agreeing to duel the Frenchman, while only armed with a stick. The Frenchman, in the face of Angelis' faith backed down, and Angelis was declared the winner. Angelis despaired however, because he had decided to witness for Christ. He then abandoned medicine and closed the shop in his house. And suddenly, for unknown reasons, on the Saturday of Lazarus of the year 1813, he denied Christ and became a Muslim! Because he created a scene in a café in Nafplion, and was drunk, the authorities banished him to the island of Chios. Many of his actions seemed strange, and were reminiscent of other "fools-for-Christ". He repented there, and cried every day with tears of repentance in their temples, prayed and gave alms. He also gave reasons to the Turks, seeking martyrdom. Once he went to a Customs House and confessed that he was a Christian. The Turks mercilessly beat him and locked him in irons in the prison in the Castle of Chios. But because he remained steadfast in the Christian confession, he was beheaded on December 3rd 1813.
According to the first source above, St. Angelis is the protector of empirical doctors [i.e. practical, experienced doctors, without scientific knowledge], wrestlers, and those who suffer from psychological problems. 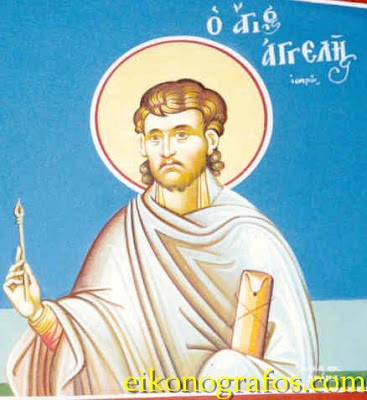 Icon of St. Angelis the Neomartyr, the Physician from Argos, martyred in Chios in 1813 (Icon courtesy of www.eikonografos.com, used with permission.)
Apolytikion for a Martyr - 4th Mode
Thy Martyr, O Lord, in his courageous contest for Thee, received as the prize the crowns of incorruption and Life from Thee our Immortal God. For since he possessed they strength, he cast down the tyrants, and wholly destroyed the demons' strengthless presumption. O Christ God, by his prayers, save our souls since Thou art merciful.
(translation from Holy Transfiguration Monastery and goarch.org)
Απολυτίκιον. Ήχος α`. Χορός αγγελικός.
Χορός αγγελικός Αγγελή Νεομάρτυς, και δήμος Αθλητών, επεκρότησαν άνω, την σην υπέρ της πίστεως, καρτερίαν και ένστασιν, και το πνεύμα σου μετ` ευφροσύνης λαβόντες, ανεβίβασαν, εις ουρανού μετά δόξης, Χριστώ τω Θεώ ημών.
(taken from: http://voutsinasilias.blogspot.com/2008/12/3.html)
Apolytikion for St. Angelis the New Martyr, the Physician - 1st Tone "The choirs of Angels..." (amateur translation from above Greek)
The choir of Angels, O Neomartyr Angelis, and the city of Champions, clap their hands above, at your endurance and steadfastness for the faith, and they receive your spirit, leading it to the heavens with glory, to Christ our God.
St. Angelis the New Martyr, intercede for us!
Through the prayers of our Holy Fathers, Lord Jesus Christ our God, have mercy on us and save us! Amen!
Posted by Agioi_Anargyroi at 9:37 AM

Your blog is a very ineresting one, thank you again for all your work. May Our Lord bless you.
A very special thank for the material about st Angelis the Neomartyr, the Physician

Strangely interesting, more that you could know. Do you know when this Saint was born and what his actual name was prior to Sainthood?