The Miraculous Icon of the Theotokos "Of the Three Hands" and St. John of Damascus

"Synaxis of the Icon of our Most Holy Lady the Theotokos "Of the Three Hands." [Celebrated June 28th] 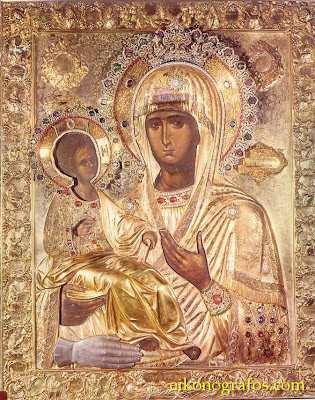 Original Icon of the Theotokos "Of the Three Hands" (Icon courtesy of www.eikonografos.com used with permission)
"The great defender of the Orthodox Faith against the Iconoclasts, our righteous Father John of Damascus (See Dec. 4), was slandered to the Caliph of Damascus by the Iconoclast Emperor Leo the Isaurian (reigned 717-741). Saint John was accused of sedition and his right hand was cut off. Having asked for the severed hand, Saint John passed the night in great pain, praying for the aid of the most holy Theotokos."
[The Immaculate Virgin appeared to the sufferer in his sleep, and gazing mercifully at him said: "Thy hand is now whole; sorrow no more". (http://www.balamand.edu.lb/theology/live_of_saint_john_of_damascus.htm)]
"Awaking from sleep, he found that his hand had been miraculously restored, with only a red scar about the wrist where it had been severed, as a testimony to the wonderous healing. In thanksgiving, he had a silver hand attached to the icon to commemorate this great miracle." 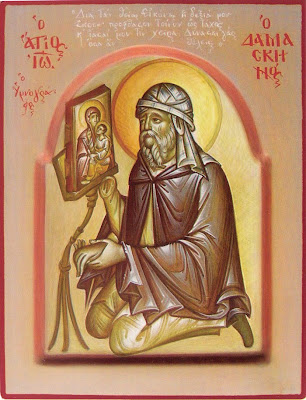 St. John of Damascus entreating the Theotokos for healing (http://3.bp.blogspot.com/_Ir0BxevvGe4/TE3WqI3DnlI/AAAAAAAAAfI/ijJYlJpNtP4/s1600/ag-Ioannis-Dam-Peristeri-2010.jpg)
[John composed in his soul the hymn: "In thee, O Full of Grace, all creation rejoiceth". This hymn is sung in Church till now at the Liturgy of Saint Basil the Great. (http://www.balamand.edu.lb/theology/live_of_saint_john_of_damascus.htm) (See full text below: "Because of you, O Full of grace...")]
"On becoming a monk in the lavra of Saint Sabbas the Sanctified in the Holy Land, John brought the icon with him. There it remained until the thirteenth century, when it was given to Saint Sabbas of Serbia (see Jan. 14), who brought it to Serbia, where it remained for a time. Later, it was miraculously transported by an unguided donkey that carried it to the Serbian Monastery of Hilandar on the Holy Mountain, Athos, where it remains to this day."
(http://www.goarch.org/chapel/saints/2339)
Note: the full service of the Tricherousa Icon of the Theotokos (in Greek), is available here: http://voutsinasilias.blogspot.com/2009/07/12.html. 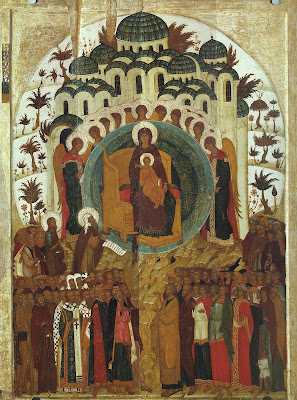 Icon of the Theotokos, "In thee, O Full-of-grace..." (http://www.belygorod.ru/img2/Ikona/Used/0Dionisiy_OTebeRaduetXVIvGTG.jpg)
The Great Megalynarion
Because of you, O Full of grace, all creation rejoices, the ranks of Angels and the human race; hallowed Temple and spiritual Paradise, pride of Virgins; from you God was incarnate and he, who is our God before the ages, became a little child. For He made your womb a throne and caused it to become wider than the heavens. Because of you, O Full of grace, all creation rejoices; glory to you.
(http://www.anastasis.org.uk/small_compline.htm)
Apolytikion of the Icon of the Theotokos "Of the Three Hands" in the Fourth Tone
From the Palestine, godly-minded Sabbas brought unto us thy ven'rable icon, which is known as Of the Three Hands, O all-holy Bride of God. Wherefore, since the monks of Hilandar now possess it as their boast, they send up hymns of praise and thanksgiving, while crying out with fervour: Rejoice, thou who art full of grace.
Kontakion in the Plagal of the Fourth Tone
Come, let us worship the famed icon of the Queen of all called: Of the Three Hands, for the fearful marvel which it wrought; and with fervent faith and longing, come, let us cry out: O pure Maiden, keep thy monastery and thy flock from all dangers, tribulations, and adversities, for we cry to thee: Rejoice, thou help and defence of all. 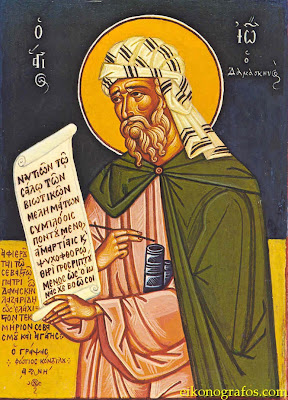 Icon of St. John of Damascus (Icon courtesy of http://www.eikonografos.com/ used with permission)
Most-holy Theotokos save us!
Posted by Agioi_Anargyroi at 5:24 PM