Sts. Eleutherios the Hieromartyr and his mother Anthia

Here is from today's reading (December 15th) of the Prologue by St. Nikolai (taken from: http://www.westsrbdio.org/prolog/prolog.htm): 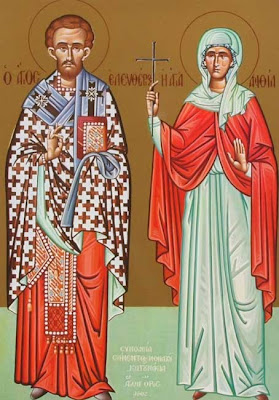 Icon of Sts. Eleutherios the Hieromartyr and his mother Anthia (taken from: http://www.christopherklitou.com/icon_15_dec_eleutherius_and_his_mother_anthia.htm)

"From a good tree comes good fruit. This wonderful saint had noble and greatly eminent parents. Eleutherius was born in Rome, where his father was an imperial proconsul. His mother Anthia heard the Gospel from the great Apostle Paul and was baptized by him. Having been left a widow early, she entrusted her only son for study and service to Anicetus the Bishop of Rome. 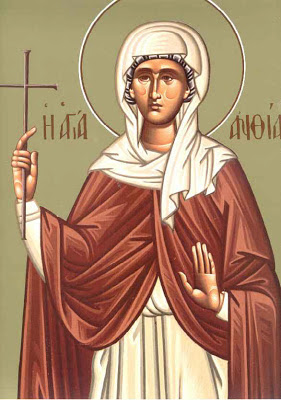 Seeing how Eleutherius was gifted by God and illumined by the grace of God, the bishop ordained him a deacon at the age of fifteen, a priest at the age of eighteen, and a bishop at the age of twenty. Eleutherius's God-given wisdom made up for what he lacked in years, and this chosen one of God was appointed Bishop of Illyria with his seat in Valona (Avlona), Albania. The good shepherd guarded his flock well and increased their number day by day. Emperor Hadrian, a persecutor of Christians, sent the commander Felix with soldiers to seize Eleutherius and bring him to Rome. When the raging Felix arrived in Valona and entered the church, he saw and heard the holy hierarch of God; suddenly his heart changed, and he became a Christian. Eleutherius baptized Felix and departed for Rome with him, returning joyfully as if he were going to a feast and not to trial and torture.

The emperor subjected the noble Eleutherius to harsh torture: flogging, roasting on an iron bed, boiling in pitch, and burning in a fiery furnace. But Eleutherius was delivered from all these deadly tortures by God's power. Seeing all this, Caribus the Roman eparch declared that he also was a Christian. Caribus was tortured and then beheaded, and so was Blessed Felix. Finally, the imperial executioners cut off the honorable head of St. Eleutherius. 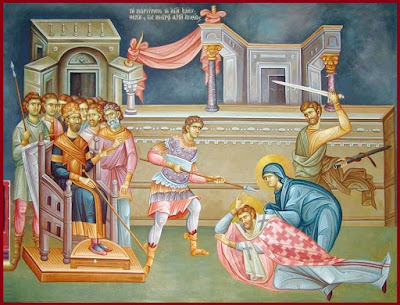 The Martyrdom of Sts. Eleutherios and Anthia (source)

When his mother, the holy Anthia, came and stood over the dead body of her son, she also was beheaded. Their bodies were translated to Valona, where even today St. Eleutherius glorifies the name of Christ by his many miracles. He suffered during the reign of Hadrian in the year 120." 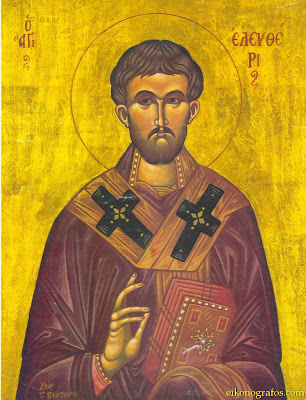 Another icon of St. Eleutherios the Hieromartyr and Wonderworker (Icon courtesy of www.eikonografos.com used with permission)

And some other interesting information about Sts. Eleutherios and Anthia and their veneration (from: http://www.groupsrv.com/religion/about93388.html):
"Orthodox Christians solemnly commemorate [Sts. Eleutherios and Anthia] on December 15, the day of the dedication of a great church to the Saints in Constantinople during the reign of the Byzantine Emperor Arkadios. This was in the fifth century and the church dominated the Xerolophos district of Constantinople. Ever since many others have been erected in their honour, particularly in Greece. In the West the Saints are honoured on April 18, traditionally the day of their martyrdom in Rome. A portion of their relics are still treasured in Reati, in Italy. In the Nea Ionia area of Athens, inhabited mainly by refugees from Asia Minor, other relics of the Saints are venerated by pilgrims from across Greece and Cyprus. A twelfth century church dedicated to St. Eleutherios served as the Athenian cathedral during the centuries of "Turkocratia" or Ottoman rule. This small church is dwarfed by the neighboring large cathedral, built in the nineteenth century, but it continues to draw many more visitors and tourists.

For centuries Orthodox believers have considered Saints Eleutherios and Anthia to be the patrons of expectant mothers and of childbirth. Their fame as wonder workers, the fact that they were mother and son and the implications of their names contributed to this. 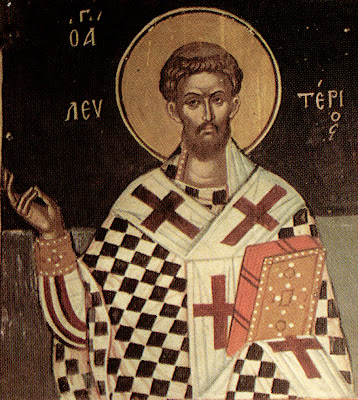 [Note: "Eleutherios" is a variant of "Freedom" in Greek, thus, mothers pray that they might safely be free of their pregnancies by giving birth to healthy children. "Anthia" resembles "anthos" meaning flower, and as mentioned above, she was the mother of St. Eleutherios.]

Furthermore St Eleutherios is held to be the protector of the oppressed, prisoners and all those undergoing any kind of trial. It is believed that these two Saints, like Kyprianos and Justina, dispel all demonic influences. Orthodox Christians living in the Ottoman Empire thought of St. Eleutherios as their helper in the movement for independence. In Albania where the previous Communist regime had banned the Orthodox faith and all religion, the Saints became a focus for Orthodox Christian resistance -particularly amongst the Greek Epirote minority in the south. 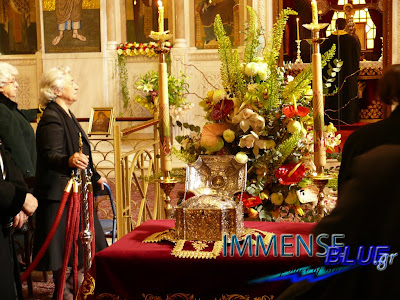 Picture of the Holy Skull of St. Eleutherios visiting his church in Gkyze. It is treasured by the Holy Metropolis of Elassonos after previously being in the Monastery of St. Eleutherios Klimadon near Olympus (taken from: http://www.immenseblue.gr//images/rsgallery/original/1.Kara_Agiou_Eleftheriou.JPG)

The standard life of the Saints was recorded by St. Symeon Metaphrastes in the tenth century, this was translated into Modern Greek by Agapios the Cretan in the book "the New Paradise". The office of the Saints was published by Athanasios Parios in Leipzig in 1784. In 1987 Archimandrite Nicolas Protopapas published a study titled "Saint Eleutherios the Hieromartyr". St. Eleutherios of Avlona is not to be confused with the Byzantine St. Eleutherios or a number of other saints bearing the same name. Better known in the West is another St. Eleutherios, the Pope of Rome who succeeded St. Soter in 175 A.D. He was a Greek by origin but other than this very little is known about him. It is thought that this Pope sent missionaries to the British Isles; Phaganos (or Fugatius) and Deruvian (or Damian) are the names given to two of these missionary Saints. They are commemorated on May 26 with St. Eleutherios the Pope. " 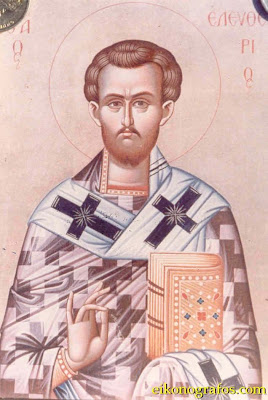 Icon of St. Eleutherios the Hieromartyr (Icon courtesy of www.eikonografos.com used with permission)
Apolytikion of St. Eleutherios the Hieromartyr in the Plagal of the Fourth Tone
Adorned with flowing priestly vesture and with dripping streams of blood you at once went to your Lord Christ, O blessed wise Eleftherios, annihilator of Satan. Wherefore, do not cease to intercede for those who honor your blessed struggles in faith.

Kontakion in the Second Tone
O venerable One, we all praise and entreat you, Eleftherios, Priest-Martyr, comeliness of Priests and exaltation of champions. Deliver from diverse dangers those fervently honoring your memory, interceding unceasingly for us all.(taken from: http://goarch.org/chapel/saints_view?contentid=337&type=saints)


Sts. Eleutherios and Anthia, intercede for us!
Through the prayers of our Holy Fathers, Lord Jesus Christ our God, have mercy on us and save us! Amen!
Posted by Agioi_Anargyroi at 10:36 AM