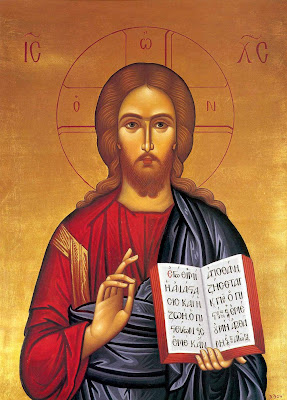 Icon of Christ painted by the nuns of the Monastery of St. John the Theologian, Souroti (outside of Thessaloniki). (If I'm not mistaken, I remember hearing that Elder Paisios, having seen Christ in visions, related to the nuns under his direction how to depict Him.) (http://www.rel.gr/photo/displayimage.php?album=33&pos=118)

On July 12th 1994, Elder Paisios the Athonite reposed in the Lord. Here I hope to provide some amateur translations of a few miracles attributed to Elder Paisios after his death, though there are many. Throughout his life he provided spiritual guidance, prayers, and help to thousands, and after his death, many thousands continue to flock to his tomb to pay homage to such a grace-filled elder, and to seek his intercessions and help. Here are a few links with more information on Elder Paisios the Athonite: http://orthodoxphotos.com/Orthodox_Elders/Greek/Fr._Paisios/index.shtml, http://www.pigizois.net/agglika/paisios/paisios.htm, http://elderpaisios.com/, http://orthodoxwiki.org/Paisios_(Eznepidis. May we have his blessing! 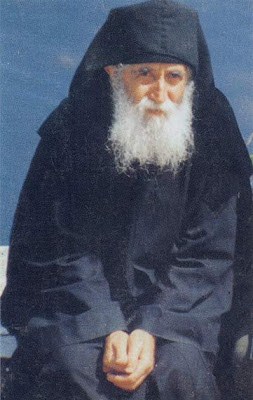 Picture of St. Paisios the Athonite (taken from: http://www.rel.gr/photo/displayimage.php?album=3&pos=16)

Fragrance
The grace of fragrance was present and after the dormition of Geronda it did not disappear. Many sensed a fragrance, when they venerated his tomb, when they visited his cell on Mount Athos, or others sensed a fragrance pouring forth for his clothing.
As the fathers who succeeded Geronda at his Cell bear witness to, “the first period after his dormition roughly everyone sensed this distinguished fragrance.
Fr. A.K. bears witness: “The year that Gerondas passed away there was a Liturgy at his Cell’s feast day. I sensed at the hour of the Divine Liturgy a strong fragrance, which continued until Koutloumousiou and then dissipated. (http://orthodox-world.pblogs.gr/2008/04/bios-kai-thaymata-toy-geronta-pa-sioy-toy-agioreitoy.html)

4-6-2006 - I want to say that the saints who are sanctified today have great glory, great boldness towards God and help us very much. The following occurred a little before three months ago. A driver went from the area of Thermi near Thessaloniki. A monk stopped him and said, “My lad, can you take me until Thessaloniki?” “Of course, come”. The driver was alone. He sat next to the driver and said: “Kosta, -without him knowing- you have an malignant [ αρχόμενο?] cancer in your lungs. You should go to the hospital and you’ll catch it.” Immediately he disappeared. He was amazed. He made a few phone calls and related what happened. They brought him a few photographs. They asked him if he recognized which was the monk. He recognized Elder Paisios. He of course went to the hospital. The doctors tested him and found a malignant cancer in the lungs, though he himself felt no pain. See how these men who pleased God appear after their death to confirm the truth of the gospel."
(http://www.agiooros.net/forum/viewtopic.php?f=45&t=10079) 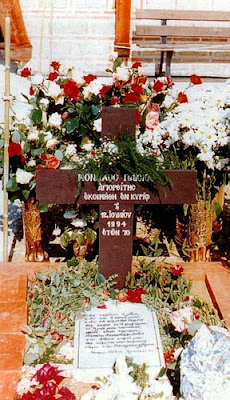 The Grave of St. Paisios at the Monastery of St. John the Theologian, Souroti (http://orthodoxphotos.com/Orthodox_Elders/Greek/Fr._Paisios/5.shtml)
-->

Another lady from Cyprus went to venerate at the grave of Fr. Paisios. Kneeling to venerate, she slipped. She put her hand down to steady herself. When she went to the hotel she saw on her elbow that there was some dirt. She rejoiced at this because she perceived it as a blessing from the grave of Fr. Paisios. She gathered it in a receptacle that she had with her. Then she went to sleep. When she awoke, she saw that a lily had sprouted above the dirt. Who planted it, who watered it?
(http://www.agiooros.net/forum/viewtopic.php?f=45&t=10079)

A short time ago I visited the cell of Fr. Paisios, and there Fr. Isaiah related (if I remember his name correctly) the most recent miracle of the Elder.
The coach of a national football team had his wife in intensive care in a coma in a very serious condition, when a friend of his asked him if he wanted to go have a Paraklesis service at the Monastery of Souroti, where Elder Paisios’ grave is. He told his friend that he couldn’t leave his wife’s side, so his friend went alone and returned with soil from the grave of Elder Paisios. The husband proceeded to mix the soil with wax and made the sign of the cross with the mixture on his wife’s hand, and O the wonder!! The sick woman who was in a coma and in a very serious condition opened her eyes and kissed the cross and of course continued to totally recover. Another miracle from this great athlete of our Orthodox Faith."
(http://www.agiooros.net/forum/viewtopic.php?f=45&t=3490) 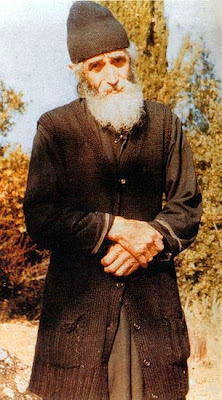 Another picture of St.  Paisios (http://orthodoxphotos.com/Orthodox_Elders/Greek/Fr._Paisios/2.shtml)

Intervention on the road
Mr. St. from Kalamata, a resident of Athens, traveled by car towards Ioannina. On the way he fell victim to strong frontal collision when the car literally disintegrated and he was seriously injured in the head. He was transferred to the hospital unconscious and was put in intensive care.
While in the present situation, he saw a luminous cloud, and in the middle an elderly monk. Because in those days had heard from someone about a grace-filled Elder Paisios, though he didn’t have any special relationship with the Church, in his amazement he spontaneously asked the unknown monk:

-Are you Elder Paisios?

The Elder did not respond. He smiled, caressed him lightly on the head, and said to him:

-Don’t be afraid! You will get better!

Soon he came to. Although perplexed by this paradox, and although he did not know his wonderful guest, he believed his assurance. He related this in a strong manner to the doctors. And they were surprised and believing his humanly inexplicable improvement, they confessed:

-Indeed it is a miracle!

Having emerged from the hospital, on the road he passed in front of a bookstore and was surprised at the representation in front of him of his savior [i.e. a photograph of Elder Paisios on a book cover]. Thus he acknowledged his benefactor and full of gratitude he bought the book and read it.

He hastened to venerate at “Panagouda” (January 1998) [Elder Paisios' former cell on Mount Athos], where he related the above. Besides being rescued from certain physical death, the intervention of the Elder radically changed his life. He sought a spiritual father and went to Confession. He stopped his worldly life despite the intense pressures of relatives. «I cannot continue in the same way! In my mind the bright, smiling face of the Elder continually comes», he said with tears in his eyes."
(http://orthodox-world.pblogs.gr/2008/04/bios-kai-thaymata-toy-geronta-pa-sioy-toy-agioreitoy.html)

For an talk in Greek of some of the miracles worked by Elder Paisios, see: http://apantaortodoxias.blogspot.com/2010/02/blog-post_7715.html. 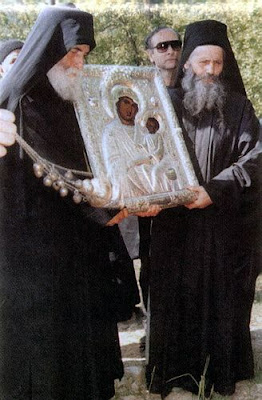 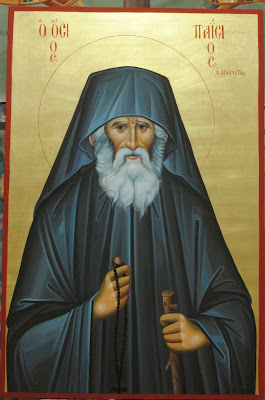 St. Paisios the Athonite (source)
Through the prayers of our Holy Fathers, Lord Jesus Christ our God, have mercy on us and save us! Amen!
Posted by Agioi_Anargyroi at 10:29 AM