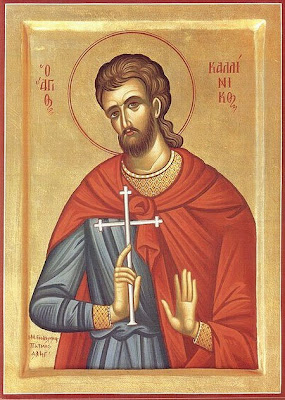 St. Kallinikos (Callinicus) the Martyr of Gangra, Asia Minor - Commemorated on July 29 (taken from: http://ocafs.oca.org/FeastSaintsViewer.asp?SID=4&ID=1&FSID=102123)
"The Holy Martyr Callinicus, a native of Cilicia, was raised from childhood in the Christian Faith. Grieving that many misguided people would perish for eternity because they worshiped idols, he went through the cities and villages to proclaim Jesus Christ and His teachings to the pagans, and with the Word of God he converted many to Christianity.
In the Galatian city of Ancyra the holy confessor was arrested and brought to trial before a governor named Sacerdonus, a fierce persecutor of Christians. The governor, threatening tortures and death, ordered the saint to offer sacrifice to the idols. The saint fearlessly declared that he was not afraid of martyrdom, since every believer in Christ receives from Him strength in ordeals, and through death inherits an eternal blessed life.
They cruelly beat the saint with ox thongs and tore at his body with iron hooks, but he endured everything with patience and calm. This aroused still greater fury in Sacerdonus, and he ordered that sandals with sharp nails be placed on the saint's feet, and that they should drive the martyr with whips to the city of Gangra to be burned.
The pathway was arduous, and the soldiers who accompanied the condemned man were weak from thirst. In despair they began to implore the saint to pray the Lord for water. The saint, taking pity on his tormentors, with the help of God caused a miraculous spring of water to gush forth from a stone. The astonished soldiers were filled with sympathy for their rescuer, and they wanted even to set him free. Fear of execution, however, compelled them to bring the martyr farther. In Gangra, St Callinicus joyfully offered thanks to the Lord, Who had vouchsafed him the crown of martyrdom. He went into the blazing fire and gave up his soul to God. His body, remaining unharmed, was reverently buried by believers."
(taken from: http://ocafs.oca.org/FeastSaintsViewer.asp?SID=4&ID=1&FSID=102123)
+
Apolytikion in the Fourth ToneThy Martyr, O Lord, in his courageous contest for Thee received the prize of the crowns of incorruption and life from Thee, our immortal God. For since he possessed Thy strength, he cast down the tyrants and wholly destroyed the demons' strengthless presumption. O Christ God, by his prayers, save our souls, since Thou art merciful.
Kontakion in the Second ToneThou rightly hast now inherited delight on high, for thou didst wax hot with burning love for Christ thy God, O Callinicus, for Whose sake thou didst courageously brave the fire; as thou standest before Him now, cease not interceding with Him for us all.
(taken from: http://goarch.org/chapel/saints_view?contentid=145)
+
Through the prayers of our Holy Fathers, Lord Jesus Christ our God, have mercy on us and save us! Amen!
Posted by Agioi_Anargyroi at 5:55 PM