Sts. Boris and Gleb the Passion-bearers 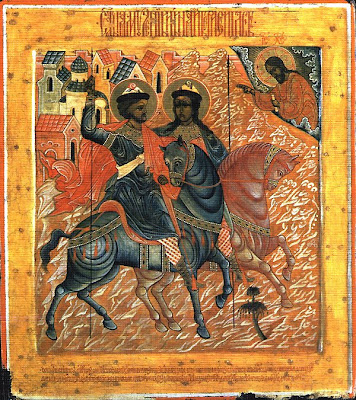 Sts. Boris and Gleb the Passion-bearers - Commemorated on July 24 (taken from: http://ocafs.oca.org/FeastSaintsViewer.asp?FSID=102083)
"Saint Boris was one of the sons of St Vladimir (July 15), and was named Romanus at his Baptism. After their father's death the eldest son Sviatopolk planned to kill his brothers Boris, Gleb, and Yaroslav in order to seize power. He sent a message to Boris, pretending that he wished to live in peace with him, and to increase Boris's land holdings inherited from their father.

"Saint Gleb was the son of St Vladimir (July 15) and the brother of Sviatopolk, Yaroslav, and St Boris. He was named David at his Baptism.

St Gleb wept for his father and brother, and was lamenting them when the assassins arrived. They seized his boat and drew their weapons, but it was Gleb's cook Torchin who stabbed him with a knife.
The martyr's body was thrown onto the shore between two trees. Later, he was buried beside St Boris in the church of St Basil.

The holy martyrs Princes Boris and Gleb are also commemorated on May 2." (taken from: http://ocafs.oca.org/FeastSaintsViewer.asp?FSID=102083) 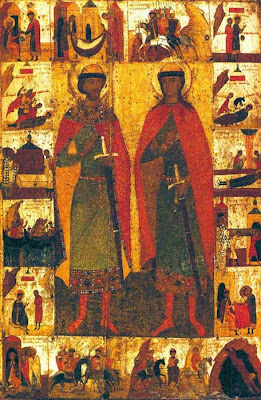 Icon of Sts. Boris and Gleb the Passion-bearers, with scenes from their life (taken from: http://christopherklitou.com/icon_24_july_boris_gleb.htm)

Apolytikion of Sts. Boris and Gleb in the Second Tone
O Righteous Passion-bearers and true fulfillers of the Gospel of Christ, Chaste Boris and guileless Gleb, ye did not oppose the onslaughts of your enemy, your brother, who though killing your bodies was unable to touch your souls. Let the evil lover of power mourn therefore, while ye rejoice with the angelic choirs; and as ye stand before the Holy Trinity, pray for the souls of them that honour your memory, that they may be pleasing to God: and by your intercessions, pray that all Orthodox people may be saved.
Kontakion in the Third Tone
On this day your memory hath shone forth, splendid with glory, O ye noble sufferers and Passion-bearers of Christ God. It hath called us to give glory to Christ our Saviour; wherefore those that draw nigh to the shrine of your relics, do ye swiftly heal as wise and divine physicians, O hallowed Boris and Gleb.
(taken from: http://goarch.org/chapel/saints_view?contentid=495&type=saints)
Through the prayers of our Holy Fathers, Lord Jesus Christ our God, have mercy on us and save us! Amen!

Some of Vladimir's advisers told Boris that he should take the army and establish himelf as ruler of Kiev. St Boris, however, said that he could never lift his hand against his own brother. Unfortunately, Sviatopolk was not so scrupulous. He came to the town of Vyshegorod to ask its leaders if they were loyal to him. They assured him that they were ready to die for him.

Sviatopolk sent assassins to the Alta to kill Boris, who already knew that his brother wanted him dead. When they arrived they heard him chanting psalms and praying before an icon of Christ. He asked the Lord to strengthen him for the suffering he was about to endure. He also prayed for Sviatopolk, asking God not to count this against him as sin.

Then he lay down upon his couch, and the assassins stabbed him with their lances, and also killed some of Boris's servants. Wrapping Boris in a cloth, they threw him onto a wagon and drove off with him. When Sviatopolk saw that he was still breathing, he sent some men to finish him off with swords.

St Boris received the crown of martyrdom in 1015. He and his brother Gleb became known as Passion-Bearers, since they did not resist evil with violence." (taken from: http://ocafs.oca.org/FeastSaintsViewer.asp?FSID=102082)
Posted by Agioi_Anargyroi at 12:07 PM