St. John the Much-Suffering of the Kiev Caves 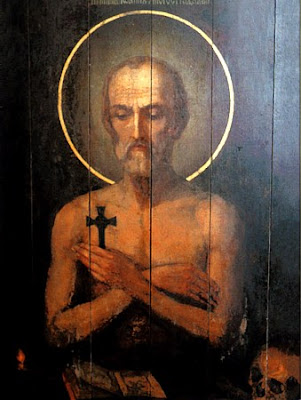 St. John the Much-Suffering of the Kiev Caves - Commemorated on July 18 (taken from: http://days.pravoslavie.ru/Images/ii1001&624.htm)
"St John the Much-Suffering pursued asceticism at the Kiev Caves Lavra, accepting many sorrows for the sake of virginity.
The ascetic recalled that from the time of his youth he had suffered much, tormented by fleshly lust, and nothing could deliver him from it, neither hunger nor thirst nor heavy chains. He then went into the cave wherethe relics of St Anthony rested, and he fervently prayed to the holy Abba. After a day and a night the much-suffering John heard a voice: "John! It is necessary for you to become a recluse, in order to weaken the vexation by silence and seclusion, and the Lord shall help you by the prayers of His monastic saints." The saint settled into the cave from that time, and only after thirty years did he conquer the fleshly passions.
Tense and fierce was the struggle upon the thorny way on which the monk went to victory. Sometimes the desire took hold of him to forsake his seclusion, but then he resolved on still greater effort. The holy warrior of Christ dug out a pit and with the onset of Great Lent he climbed into it, and he covered himself up to the shoulders with ground. He spent the whole of Lent in such a position, but the burning of his former passions did not leave him. The enemy of salvation brought terror upon the ascetic, wishing to expel him from the cave: a fearsome serpent, breathing fire and sparks, tried to swallow the saint. For several days these evil doings continued.
On the night of the Resurrection of Christ the serpent seized the head of the monk in its jaws. Then St John cried out from the depths of his heart: "O Lord my God and my Savior! Why have You forsaken me? Have mercy upon me, only Lover of Mankind; deliver me from my foul iniquity, so that I an not trapped in the snares of the Evil one. Deliver me from the mouth of my enemy: send down a flash of lightning and drive it away." Suddenly a bolt of lightning flashed, and the serpent vanished. A Divine light shone upon the ascetic, and a Voice was heard: "John! Here is help for you. Be attentive from now on, that nothing worse happen to you, and that you do not suffer in the age to come." 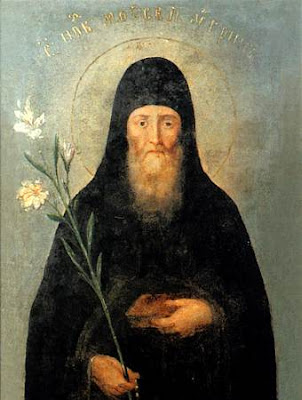 Icon of St. Moses the Hungarian, the Righteous of the Kiev Caves - Celebrated on July 26th (taken from: http://days.pravoslavie.ru/Images/im625.htm; see earlier post on St. Moses for more information: http://full-of-grace-and-truth.blogspot.com/2008/10/st-moses-hungarian.html)
The saint prostrated himself and said: "Lord! Why did You leave me for so long in torment?" "I tried you according to the power of your endurance," was the answer. "I brought upon you temptation, so that you might be purified like gold. It is to the strong and powerful servants that a master assigns the heavy work, and the easy tasks to the infirm and to the weak. Therefore pray to the one buried here (Moses the Hungarian), he can help you in this struggle, for he did greater deeds than Joseph the Fair" (March 31). The monk died in the year 1160, having acquired grace against profligate passions. His holy relics rest in the Caves of St Anthony.
[Finally [St. John] conquered [lustful passions] with God's help and by touching the relics of St. Moses the Ugrian (July 26). Being victorious over impure passion, St. John was surrounded by an internal heavenly light by which he could see at night as though it were day. (taken from: http://www.westsrbdio.org/prolog/prolog.htm)]

We pray to St John for deliverance from sexual impurity." (taken from: http://ocafs.oca.org/FeastSaintsViewer.asp?SID=4&ID=1&FSID=102049) 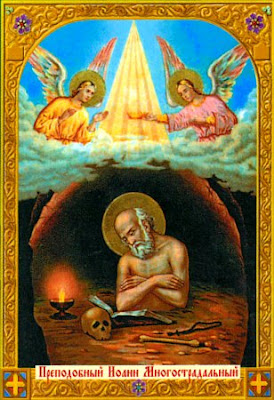 St. John the Much-Suffering of the Kiev Caves (taken from: http://days.pravoslavie.ru/Images/ii1001&589.htm)

Apolytikion for St. John the Much-Suffering in the Plagal of the 4th Tone
The image of God, was faithfully preserved in you, O Father. For you took up the Cross and followed Christ. By Your actions you taught us to look beyond the flesh for it passes, rather to be concerned about the soul which is immortal. Wherefore, O Holy John, your soul rejoices with the angels.
(altered from: http://www.goarch.org/chapel/saints/327)
Through the prayers of our Holy Fathers, Lord Jesus Christ our God, have mercy on us and save us! Amen!
Posted by Agioi_Anargyroi at 11:17 AM

Thank you so much for all your posts they are so helpful!