Excerpt from Homily III of St. John Chrysostom on the Raising of Lazarus 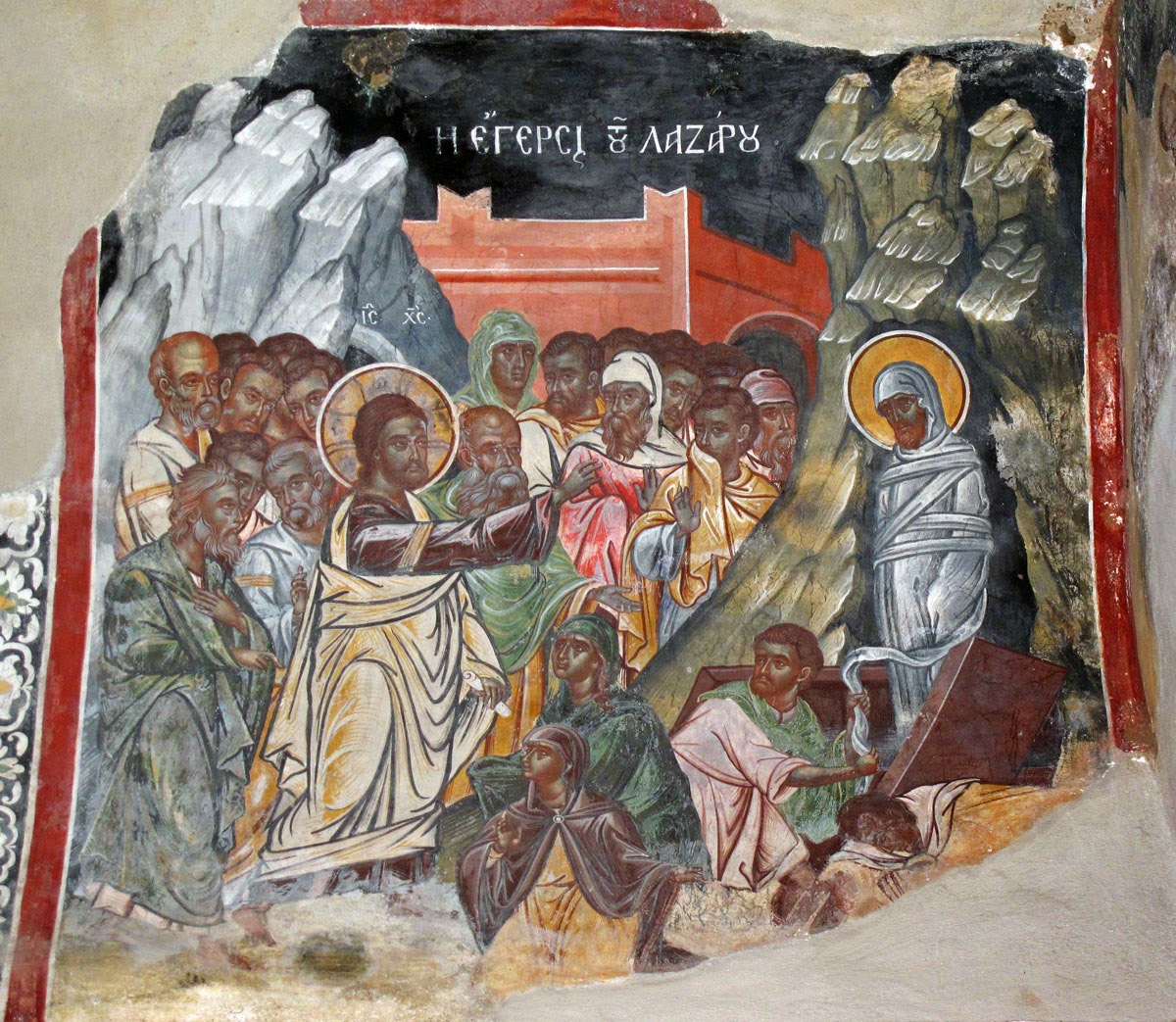 The Raising of Lazarus (source)

Excerpt from Homily III of St. John Chrysostom on the Raising of Lazarus (amateur translation)
The light of Lazarus was dissolved, and they were called to hasten to show the road towards him who was in burial clothes, who after four days was rotting in the tombs, whose bowels were largely consumed by the worms, whose harmony of the body was utterly dissolved, and who was a witness of decay, being placed foul-smelling in a tomb. But, [Christ,] the Breathing of life, and the Fragrance of the dead, provided a solution from the bowels [of His compassion]. The tomb became a womb, and as a womb giving birth, thus from the tomb arose the newly-formed Lazarus.

O new working of a wonder! A man returns to us in life, being carried out of the tomb in burial clothes, like a child wrapped in swaddling clothes. For the voice of the Master was recognized by the dead man, Who called him out of the grave with his burial clothes. “Lazarus,” He said, “come out.” And speedily the voice was heard by the dead man, and all the members quickened in the grave. To his own eyes returned order again, his own nose took its place, to the place where there was formerly the sign of his mouth, his tongue was placed, and his head breathed, and his pair of hands joyously began to move, as the harmonious number of his fingers took their order, and his nerves were reattached, and his bones were recreated, and his veins began to fill, his marrow was reformed, his tissue was rewoven, his hair was replaced. Slowly I traced the path of the members. But as a horse from the starting gate, thus the voice of the Master roused the dead man to leap up. “Lazarus, come forth.” Before He said, "arise", He provided an exit out towards the road, so that when He later resurrected him, then the resurrected one might then run straightaway.

Why did you proclaim the exit before the resurrection, O Master? I prepared the way, He says, that the dead man might not be engaged twice, wasting time at the exit. I did not tell him, "arise, and come out", but with greater haste, he receives resurrection and a path with one command. Then, Lazarus burst forth from the tomb, as protected under the wing, the dead man who was laid in the tomb.

Hades below, beholding the dead man being given up, cried out: “Who is this voice, which raises the dead from the tombs as if awakening from sleep? Who is this who dissolves the former laws of the dead? Who is this who preaches such a revolt, preferring that the dead be returned? Who is this who hastens to bring the dead towards life? Who is this who easily dissolves my bonds on the dead? Who is this, who tramples upon the writ of my dead? As I see, I hold the scepter of tyranny over men, but my unsound prison of death has gone from me. Elias raised the dead man to the joy of that woman. Elissaeus seized from me double the number of dead. But this is more bitter to me, because he has returned one of the dead, stealing one of the rotting dead, and therefore there is the danger that He will have authority over [all] the rotting dead. I am deprived, therefore of the dead man which I obtained. He conquered me, as the four-days-dead body with its burial clothes is beheld by those still living. I am trampled upon, therefore, together with the burial clothes, as a dead man is seized from me. Who, therefore, will be moved by that which I said, by the rotting dead man who conquered me, as I became like one simply standing by, guarding the dead?"
(source)


Through the prayers of our Holy Fathers, Lord Jesus Christ our God, have mercy on us and save us! Amen!
Posted by Agioi_Anargyroi at 6:08 PM

Labels: St. John Chrysostom, The Raising of Lazarus, Writings of the Saints