The Holy Monastery of St. Panteleimon, Kokkinara, and St. Matrona of Moscow 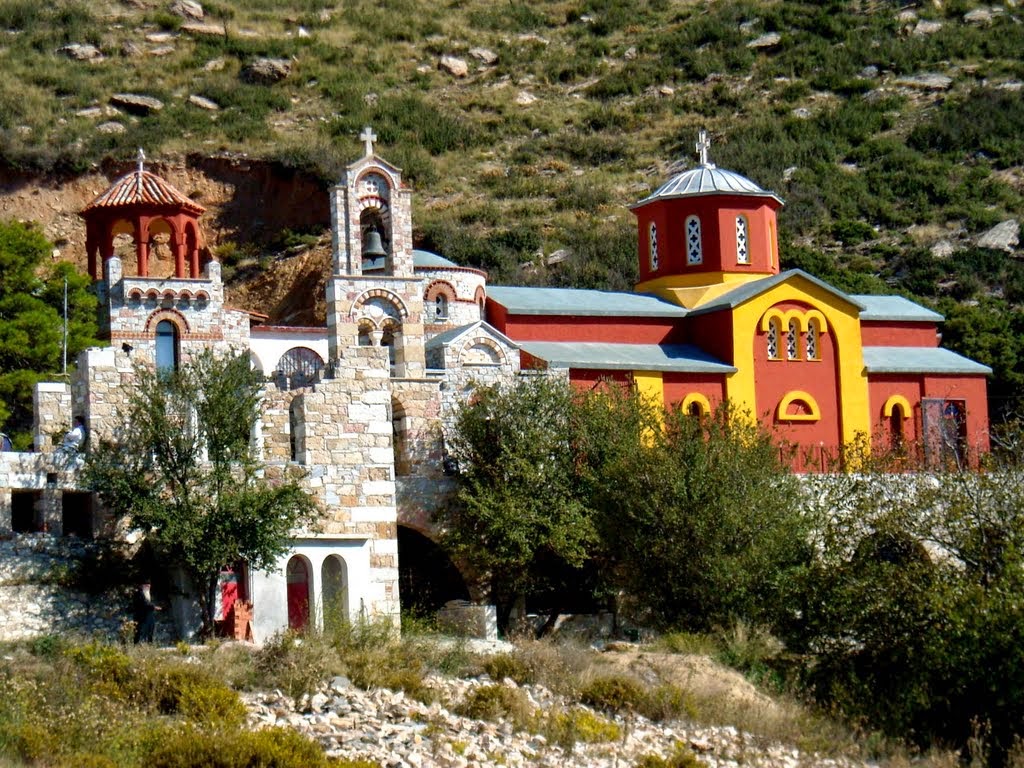 This property (6,000 stremata then), as it appears in the Great Codex of the Kyriarchou of the Holy Monastery, on March 29th 1837, was purchased (as also its whole property and not from gifts) from those who were then living there in asceticism for their benefit and relief, because after the armed and glorious revolution of [Greece] in 1821, the Holy Monastery was stripped of many of its properties, which it gave to the then newly-organized State, for the creation of a series of common works.

Within the scope of the Monastery were built the Hospital Artetaion, Evangelismos, N.I.M.T.S., The Children's Hospital, etc. the Academy, the National Library, Alse Sygrou, and Pangratiou, City Schools and Parks, the Workhouse of the Merciful for the Poor, the Marasleios, the Gennadeios, and other important buildings of the capital. 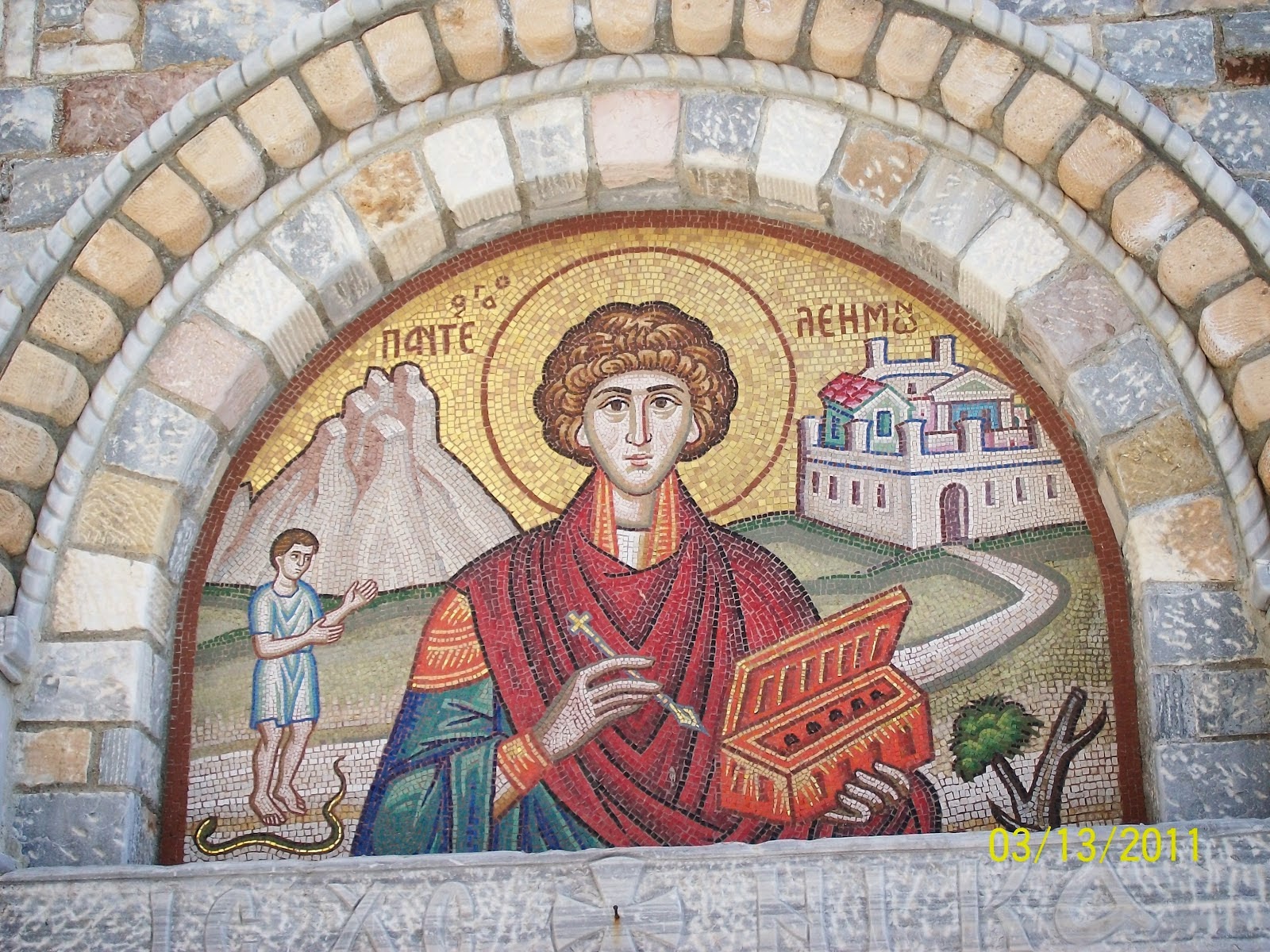 Mosaic of St. Panteleimon outside the Katholikon of the Monastery (source)

In the property of Kokkinara, therefore, there was a church in the name of the Holy Great Martyr Panteleimon, along with some cells, which were used at times by some Fathers visiting the Holy Metochion (Dependency).

It should be noted that the area was inhabited from before then. The Abbot of the Monastery of Penteli, Kyrillos Degleres, in his Apomnemoneumata mentions that "he (the founder of the Monastery of Penteli, St. Timothy, before 1578) went from end to end of the Penteli mountain, finding there various learned clerics inhabiting it, wherever on the mountain there was water and a church, including St. George Kokkinara, St. John, St. Panteleimon, St. Luke, St. Chrysostom, St. Nicholas in the Cave, the Taxiarchs in Kamari, the Frankish church at Boyiate, and St. Peter. All of these places were on Penteli Mountain, and those who dwelt on it were marked with gardens, for in all these areas there was water." (V. D. Kampouroglou, History of Athens) These learned monks, with their meager belongings and their small synodeies, descended from their cells to the Monastery which was founded by St. Timothy for Liturgy, and eventually joined the Monastery of Penteli. 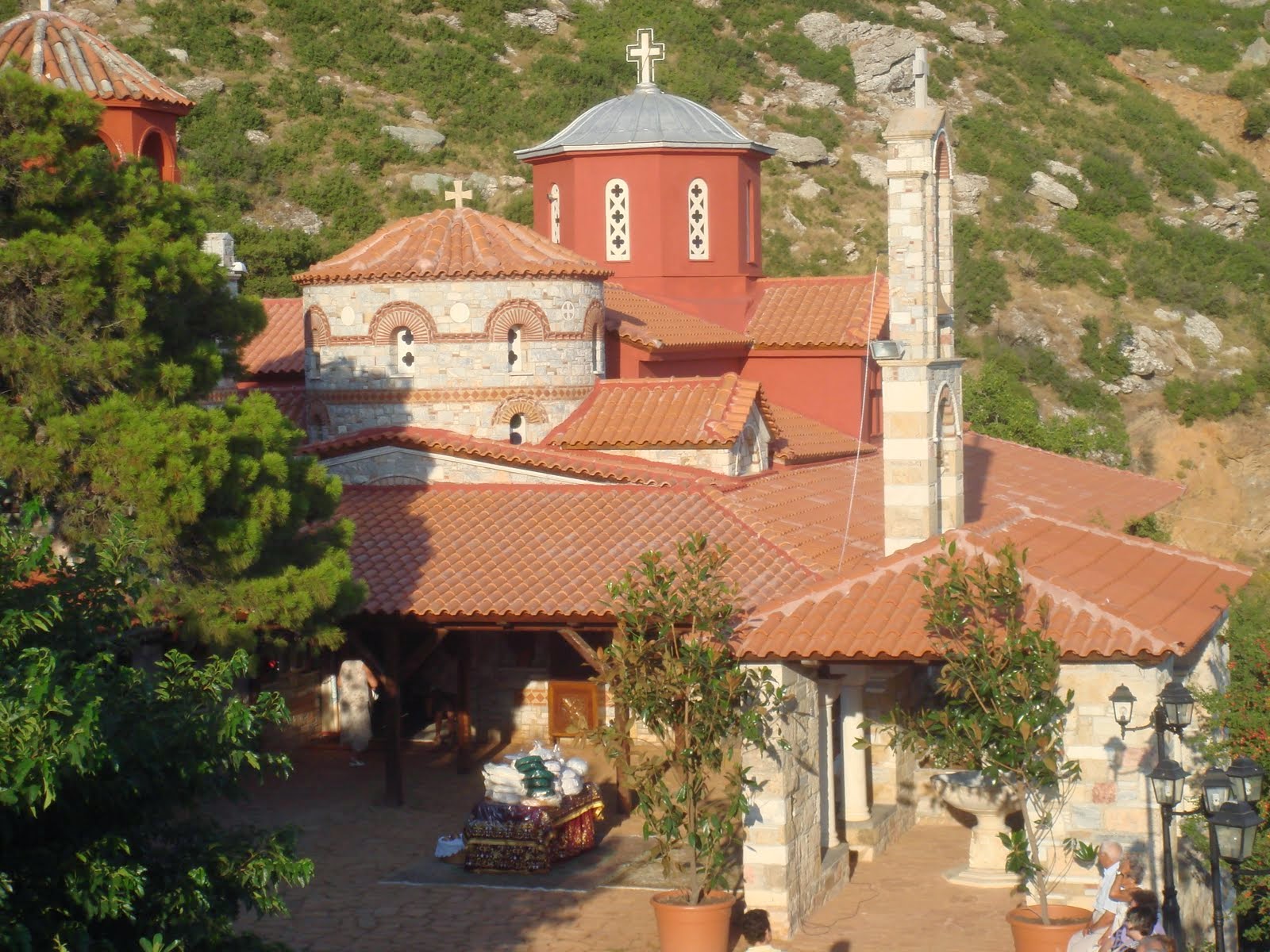 This property was noted in the codex of Petraki Monastery as "a marble-bearing area". Truly, the whole Mount of Penteli was known since antiquity as the most ancient marble mine, of an exceptional amount, the white marble of with which was used to construct many ancient and newer monuments of Athens, such as the Parthenon, the Erectheion, the Propylaia, the Theseion, the Temple of the Olympian Dios, the Academy of Athens, the Palace of Otto (today the Greek Parliment), etc. Three were the most significant mines that functioned on Mount Penteli: "Raikou", "Maltezou", and "Kokkinara".

With the State law (669/77), however, the uses of the southwest mountain for mining marble were  stopped. Because of this, however, Mount Penteli was then proclaimed a "place of special natural beauty". The recent fires and the former mining of marble had destroyed much of its natural beauty, despite the activities to fill the area with material from the construction of the Attica highway. 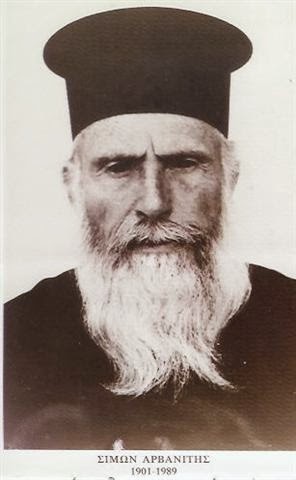 In 1965, the ever-memorable Elder Simon Arvanitis, the then Priest of the parish Church of St. Barbara Lykovrysi of the Metropolis of Attica, requested and received the Dependency of St. Panteleimon with the desire to render it a workshop for souls. And this granting of rest through the Mystery of Repentance on the one hand was through the asceticism of the Fathers that had come to dwell with him, and on the other hand, for the many multitudes of pilgrims and spiritual children of his. He built a new Church, cells, supporting areas and reception spaces for the many pilgrims, who began to flood the Dependency.

In the place of the ailing Elder Simon (+1988) was placed in 1984 Archimandrite Joseph Manettas, and in 2007, at the decision of the Abbot's Council of the Monastery, the Metochiares (Head of the Dependency) was made Archimandrite Onouphrios Kostopoulos. 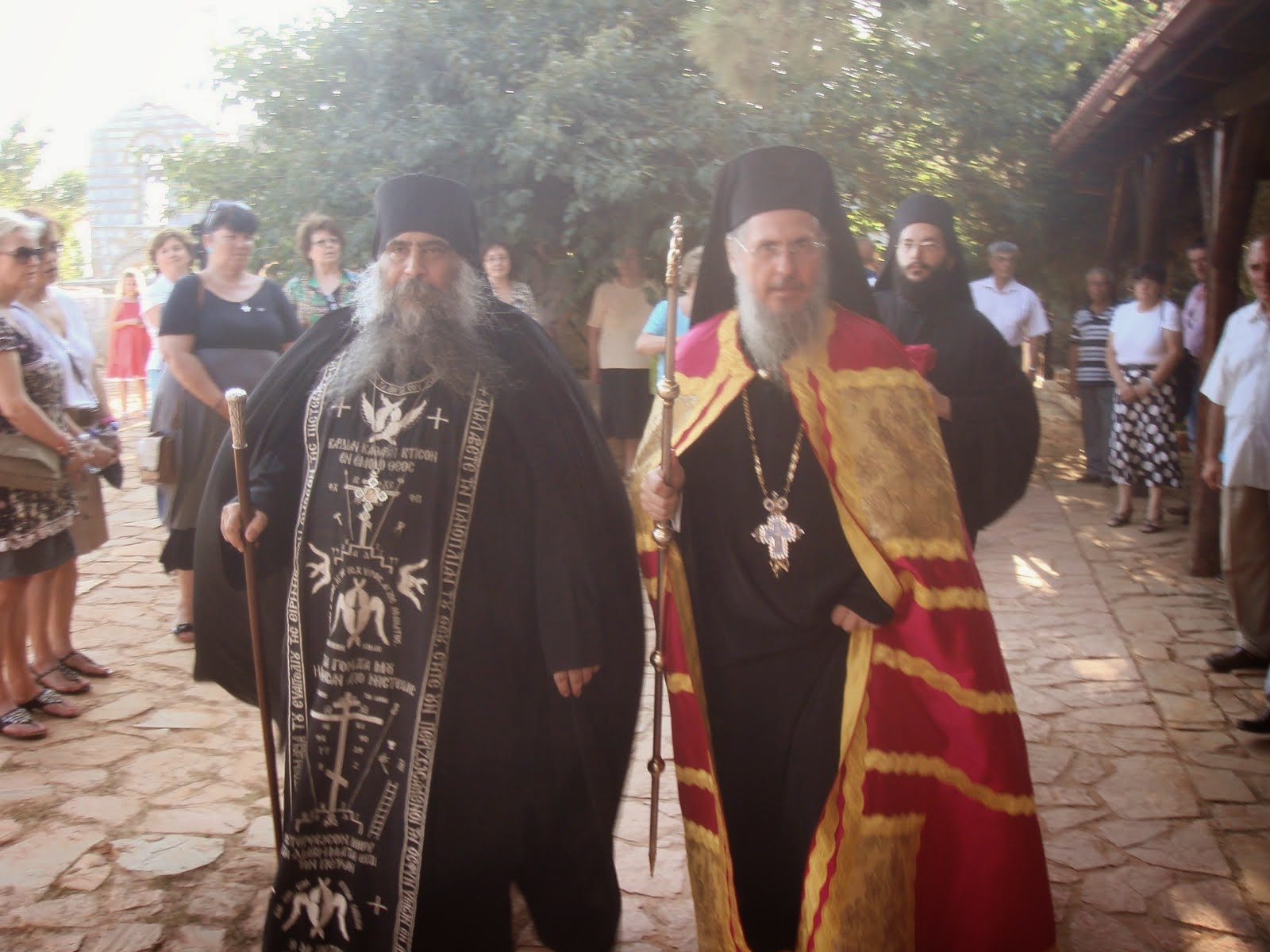 Bishop and Abbot of Petraki Monastery Iakovos (right) and Elder Onouphrios (left), with many pilgrims, at a recent feast of St. Panteleimon at the Dependency (source)

Today, at the Holy Dependency of St. Panteleimon, there are nine monks and hieromonks living under Elder Onouphrios, taking up the struggle to remodel and beautify it. Besides the former Fathers of the Dependency, since 2007 six new Fathers have been tonsured by [now Bishop] Iakovos Mpizaourte, taking up the "good fight".

Outside of the Katholikon of the Dependency are Chapels dedicated to St. Nikodemos of the Holy Mountain, the Transfiguration of the Savior, the Holy Apostles (where are preserved many holy relics of various Saints), of St. Nektarios, and of the Akathist hymn.
(source) 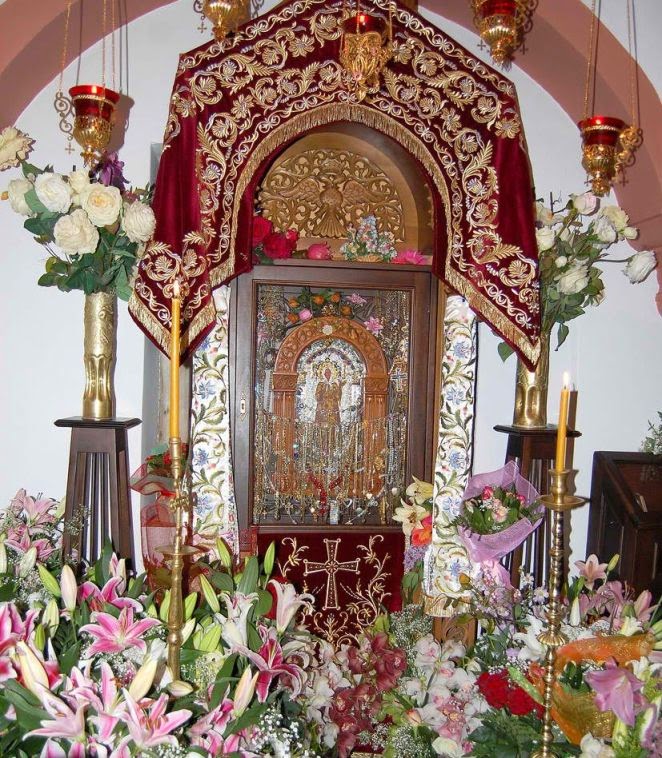 Wondrous icon of St. Matrona of Moscow, treasured by the Monastery of St. Panteleimon, Kokkinara, Penteli, with many offerings and flowers given out of love and thanks to the Saint (source)

In the Holy Dependency is preserved a portion of the Precious Relic, and also the Holy and Honored Icon of the Wonderworking St. Matrona of Russia, the Blind, through which countless miracles have taken place, and which have become a wonderworking spring of healings for all those who hasten to venerate the Saint with reverence. Witnesses to the incomparable miracles that are worked are the countless offerings placed upon the icon by the faithful, along with the many fragrant flowers which they offer in her honor, as she had great love for them during her earthly life.

Her memory is honored with a festal holy Vigil from May 1st - 2nd every year, during which a multitude of the Faithful approach this place to honor this great and wonderworking Saint of our Church.
(source) 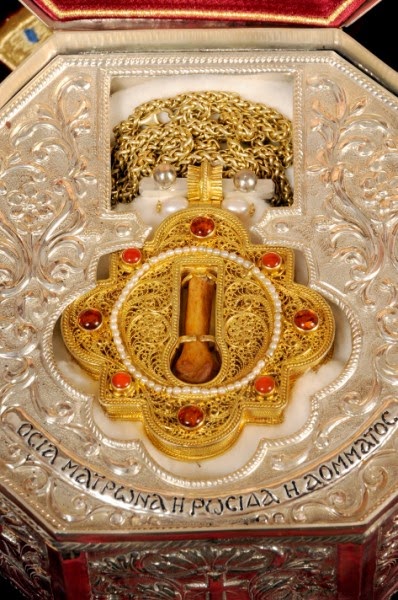 The Holy Relic of St. Matrona of Moscow, treasured by the Monastery of St. Panteleimon, Kokkinara, Penteli (source)

The Holy Dependency of St. Panteleimon, Kokkinara, Penteli,
in the Holy Archdiocese of Athens,
under the Holy Monastery of the Bodiless Powers, Petraki 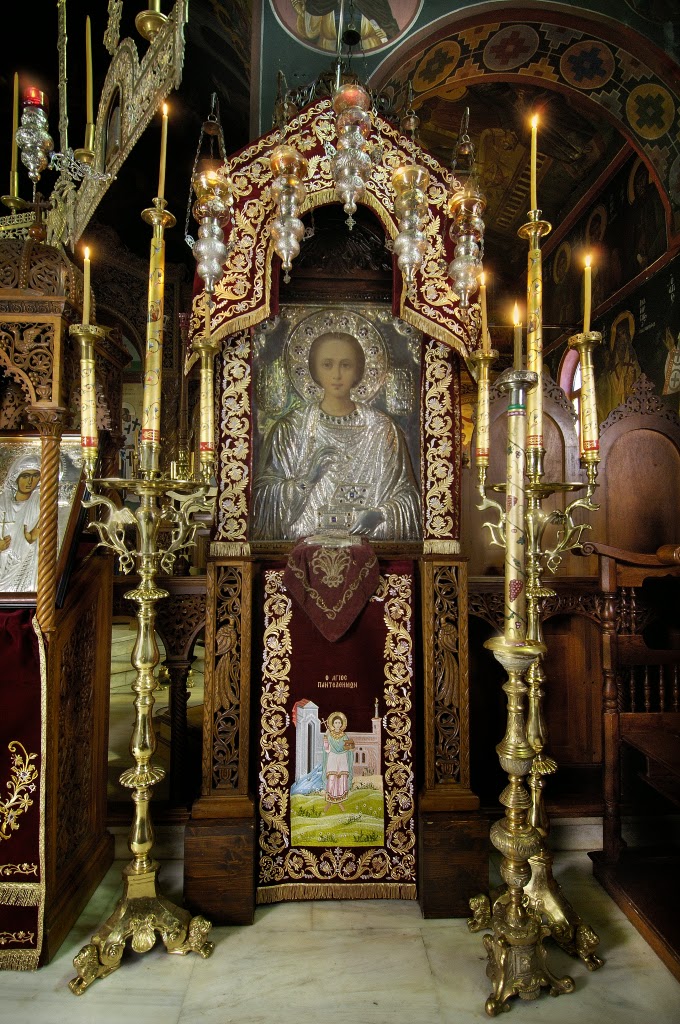 The icon of St. Panteleimon the Great Martyr in the monastery that bears his name, Kokkinara (source)

Schedule of Services
Daily services (Vespers, Orthros and Divine Liturgy) are celebrated in the evening (beginning at 8:30PM).

The morning of the following day there is no Divine Liturgy, and the gate of the Monastery opens at 9AM.

Saturday and Sunday Vespers are celebrated at 6PM, and the Sunday Divine Liturgy is at 7AM. And the rest confirms the canonical program of the Holy Dependency.
(source) 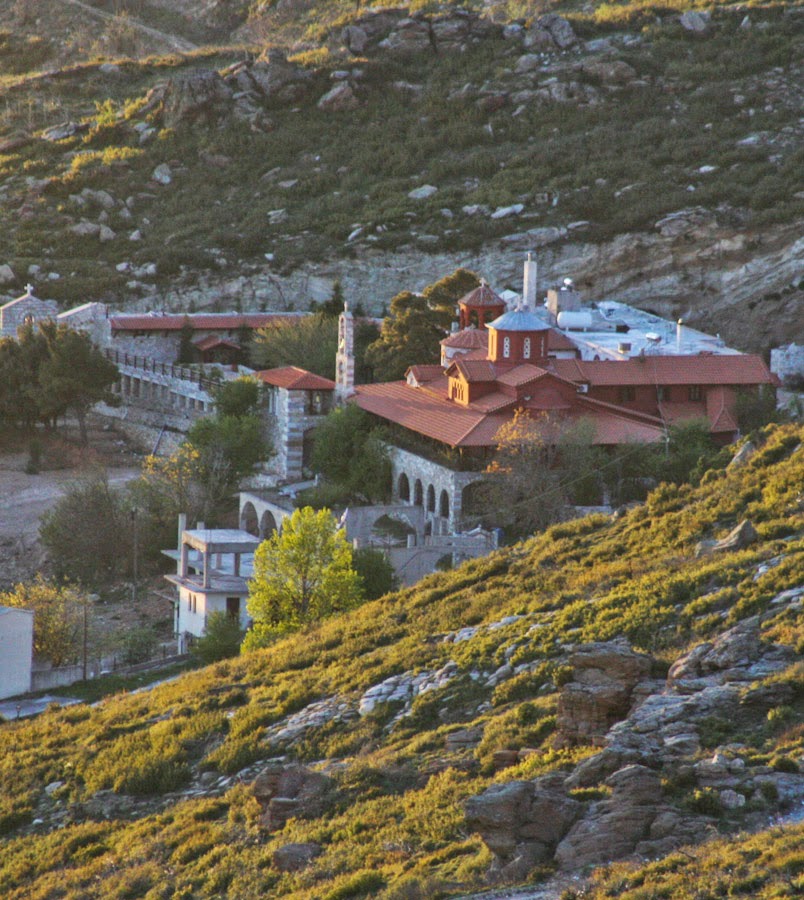 
Christ is risen from the dead, by dead, trampling down upon death, and to those in the tombs, He has granted life! Truly the Lord is risen!
Posted by Agioi_Anargyroi at 7:18 AM