Sts. Isaakios, Faustos, and Dalmatios of the Dalmatian Monastery in Constantinople 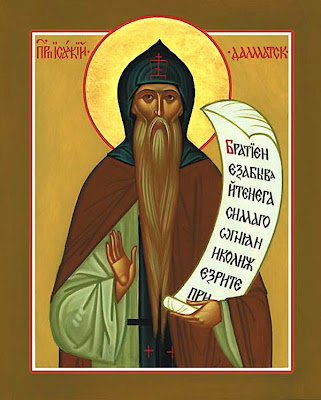 Icon of St. Isaakios the Righteous of the Dalmatian Monastery at Constantinople - Commemorated on May 30 (and also August 3rd and March 22nd) (taken from: http://ocafs.oca.org/FeastSaintsViewer.asp?FSID=102189)
"St Isaac lived during the fourth century, received monastic tonsure and pursued ascetic labors in the desert. During the reign of the emperor Valens (364-378), a zealous adherent of the Arian heresy, there was a persecution of the Orthodox, and churches were closed and destroyed.
Hearing of the persecution, St Isaac left the wilderness and went to Constantinople to console and encourage the Orthodox, and to fight against the heretics. At that time, barbarian Goths along the River Danube were making war against the Empire. They seized Thrace and advanced toward Constantinople.
When the emperor Valens was leaving the capital with his soldiers, St Isaac cried out, "Emperor, unlock the churches of the Orthodox, and then the Lord will aid you!" But the emperor, disdaining the words of the monk, confidently continued on his way. The saint repeated his request and prophecy three times. The angry emperor ordered St Isaac to be thrown into a deep ravine, filled with thorns and mud, from which it was impossible to escape.
St Isaac remained alive by God's help, and he emerged, overtook the emperor and said, "You wanted to destroy me, but three angels pulled me from the mire. Hear me, open up the churches for the Orthodox and you shall defeat the enemy. If, however, you do not heed me, then you shall not return. You will be captured and burned alive." The emperor was astonished at the saint's boldness and ordered his attendants Saturninus and Victor to take the monk and hold him in prison until his return.
St Isaac's prophecy was soon fulfilled. The Goths defeated and pursued the Greek army. The emperor and his Arian generals took refuge in a barn filled with straw, and the attackers set it afire.
[When his surviving soldiers returned from the war, wishing to tempt the Saint, they came to [St. Isaac] and said, "Prepare to make thy defense before the Emperor, who is coming to fulfil what he spoke against thee." But the Saint answered, "It has already been seven days that I smelled the stink of his bones, which were burned in the fire." Thus the righteous one was released from prison. (http://goarch.org/chapel/saints_view?contentid=151)]
After receiving news of the emperor's death, they released St Isaac and honored him as a prophet.
Then the holy Emperor Theodosius the Great (379-395) came to the throne. On the advice of Saturninus and Victor, he summoned the Elder, treating him with great respect. Obeying his instructions, he banished the Arians from Constantinople and restored the churches to the Orthodox. St Isaac wanted to return to his desert, but Saturninus and Victor begged him not to leave the city, but to remain and protect it by his prayers.
Saturninus built a monastery for the saint in Constantinople, where monks gathered around him. St Isaac was the monastery's igumen and spiritual guide. He also nourished laypeople, and helped many of the poor and suffering.
When he had reached an advanced age, St Isaac made St Dalmatus (August 3) igumen. The monastery was later named for Dalmatus. St Isaac died in the year 383, and his memory is also celebrated on March 22. 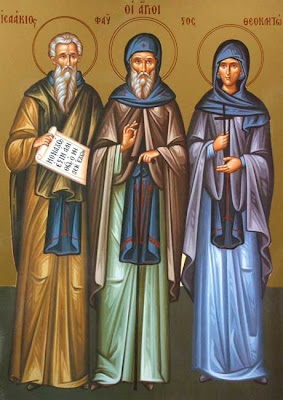 Icon of Sts. Isaakios, Faustos and Theokleto, all commemorated on August 3 (taken from: http://christopherklitou.com/icon_3_aug_isaacius_faustus_theocleto.htm)
Saint Dalmatus had served in the army of the holy emperor Theodosius the Great (379-395) and gained his notice. He left the world somewhere between the years 381-383, and went with his son Faustus to the monastery of St Isaac near Constantinople. St Isaac (May 30) tonsured father and son into monasticism, and they both began to lead a strict ascetic life.

Once during Great Lent St Dalmatus did not eat any food for the forty days. Later he regained his strength and was found worthy of a divine vision.

When St Isaac was approaching the end of his earthly life, he named St Dalmatus as igumen of the monastery, which later became known as the Dalmatian Monastery.

St Dalmatus showed himself a zealous proponent of the Orthodox Faith at the Third Ecumenical Council at Ephesus (431), which condemned the heresy of Nestorius.

After the Council the holy Fathers elevated St Dalmatus as archimandrite of the Dalmatian monastery, where he died at the age of ninety (after 446).

St Faustus, like his father, was a great ascetic and particularly excelled at fasting. After the death of his father, Faustus became igumen of the monastery."
(taken from the OCA Feasts and Saints for May 30th and August 3rd: http://ocafs.oca.org/FeastSaintsViewer.asp?FSID=102189)

Sts. Dalmatios, Isaakios and Faustos of the Dalmatian Monastery, Constantinople (taken from: http://ocafs.oca.org/FeastSaintsViewer.asp?SID=4&ID=1&FSID=102190)
Apolytikion in the Fourth ToneO God of our Fathers, ever dealing with us according to Thy gentleness: take not Thy mercy from us, but by their entreaties guide our life in peace.
Kontakion in the Second Tone
With hymns let us extol Isaacius, Dalmatus, and Faustus as Christ's servants, who shone forth brilliantly in asceticism in the world, and overturned the heresies by faith; for they cry out in behalf of us all.
(taken from: http://goarch.org/chapel/saints_view?contentid=151)
Through the prayers of our Holy Fathers, Lord Jesus Christ our God, have mercy on us and save us! Amen!
Posted by Agioi_Anargyroi at 10:05 AM