A miracle of Panagia Mechaniotissa 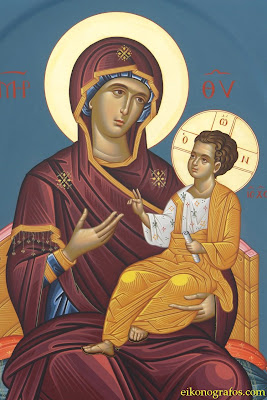 Icon of the Most-Holy Theotokos, holding Christ (Icon courtesy of www.eikonografos.com used with permission)
The un-healable wound
Mrs. Jordana Rigakis recounts the following miracle of Panagia Mechaniotissa (Holy Metropolis of Neas Krenes and Kalamarias):
-When I was young I was in the church of Panagia following the vespers. At that time a lady from Thessaloniki came with her small boy who was between six or seven years old. On her face was etched pain, and the signs of her exhaustion in body and soul were evident on her. I saw how her motherly affection was hiding a mysterious power which emanated from her great pain. Because, “insignigicant is to the woman everything else which she faces in life, if in something she suffering [forebearing?]” (Euripides)
Her affection towards the boy was obvious…Her small boy was suffering from a wound on his foot which would not heal. The mother brought the child to many doctors and hospitals and the only thing which she achieved was to become a poorer.
That afternoon the mother came with the boy to the Virgin Mary. She kneeled below the miraculous icon of Panagia and beseeched her for some time. When she got tired from praying…She asked the priests to let them spend the night with Panagia in the church. She laid on the floor below the feet of the Panagia some sheets for herself and for her child. When she was readying the covers to rest, she was granted an unexpected visited: A beautiful lady appeared before her, magnificent, who had on her something strange and different from all the other women, “I behold her as a bride most-beautiful of the unapproachable splendor made beautiful by the Spirit” (Holy Damascene). With simplicity, sweetness and condescension she asked the mother:
-What’s wrong with your child O lady?
And the mother replied:
–He has something very wrong with his foot, a wound that won’t heal.
The visiting woman said nothing. She left calmly, peacefully and majestically as he had come.
In the morning the mother prepared to clean the wound and change the dressings. And then, O the miracle!, What the surprise! The wound had healed! The Panagia with her divine visitation had healed the child’s wound that wouldn’t heal, and leaving, she took the evil, the sickness with her.
Along with the mother who was saved, let us glorify the Lord Who every day does great and wondrous miraculous works where there is fervent faith. Let us glorify and honor and together venerate the His true Mother, the Panagia, who loves us so much and so much grants her a portion of the richness of Her divine gifts.
Archimandrite Theofilaktou Marinakis, «Panagia Michaniotissa»
(amateur translation from: http://www.agiooros.net/modules.php?name=Forums&file=viewtopic&t=5692)
+ 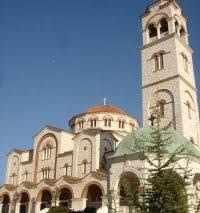 The church of Panagia Phaneromeni, or Panagia Mechaniotissa in Nea Mechaniona, near Thessaloniki. The miraculous icon of Panagia was brought from Asia Minor by the people of the village of Mechaniona, of Cyzikos, Cherson, after the Catastrophe. The new church has become major pilgrimage of the Theotokos in Greece, and thousands flock during the feast of the Dormition of the Theotokos until the Apodosis to venerate her sacred icon.(taken from: http://www.seleo.gr/sbj.aspx?sbj=1308)
Most-Holy Theotokos save us!
Posted by Agioi_Anargyroi at 9:35 AM

Labels: Icons of the Theotokos, Miracles