The transfer of the relics and selected miracles of St. Dionysios of Zakynthos 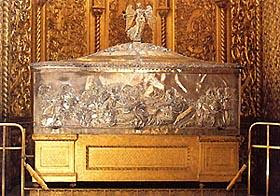 The reliquary of St. Dionysios of Zakynthos (taken from: http://www.imzante.gr/eng/saint_dionysusen.html)

THE SIGNIFICANT FESTIVALS OF SAINT DIONYSUS OF ZAKYNTHOS
"Twice a year the Zakynthians honor their Protector Saint Dionysus. All devoted Orthodox Christians arrive at the church where their concentration is drawn to the Holy Body untouched by deterioration.

The first of the two festivals is held on the 24th of August in memory of the transportation of the Holy Body from the islands of Strofadia to Zakynthos, which happened in 1717. The second festival, which is held on the 17th of December, honors the memory of the place where Our Saint went to sleep in 1622. Both of these ceremonials receive unique glory every year and they last three days each, (23rd - 26th August and 16th - 19th of December).

The magnificence of the church rituals are always carried out in a characteristic musical church idiom of Zakynthos with the participation of the Archpriests, all the holy Clergy and thousands of people, leading to the remarkably exciting hours of processional chanting in town (evening on the 24th of August and morning of the 17th of December), where the hearts of the faithful shiver, their eyes fill with tears and they kneel in supplication in front of the Elder of Ammou, Father and Comforter of all who are in pain."
(taken from: http://www.imzante.gr/eng/saint_dionysusen.html)

"Not only are the saint's relics incorrupt, but he is also one of Greece's "walking saints" (St Gerasimus and St Spyridon are the others). He is said to leave his reliquary and walk about performing miracles for those who seek his aid. In fact, the soles of his slippers wear out and must be replaced with a new pair from time to time. The old slippers are cut up, and the pieces are distributed to pilgims. On August 24, we celebrate the Transfer of his Holy Relics. Through the prayers of Saint Dionysius, may Christ our God have mercy upon us and save us."
(taken from: http://ocafs.oca.org/FeastSaintsViewer.asp?SID=4&ID=1&FSID=103564; see the previous link or: http://goarch.org/chapel/saints/342 for a brief biography of the Saint)

Icon depicting the transfer of the Holy Relic of St. Dionysios to Zakynthos (source)

Selected miracles at the relics of St. Dionysios of Zakynthos (amateur translation)
-Towards the end of the 1970’s, a priest from another part of Greece, after many prayers and entreaties, managed to have a male child. But after three months his joy was overshadowed. A large tumor appeared suddenly in the child’s ear. The doctors could not do anything. They retreated then to Zakynthos, to the Monastery of the Saint. They performed all-night supplications and vigil. At the end, while the Monastery was closed for the visitors, the abbot opened the reliquary shrine of the Saint, uncovered up to the knees, and placed the naked feet of the Saint on the child for about ten minutes. Returning, they saw that the tumor had disappeared completely and the child is healthy until today.

-The hierarchical stole which the Saint is clothed in is the same which he wore during his burial. It has never been changed even once. In the 1970’s, a pious woman donated to the Monastery a new hierarchical stole, seeking to dress the Saint with it. The abbot of the monastery did not want to do so. The Bishop then asked him to fulfill the lady’s request. So one day, he placed the Saint on the Holy Altar and the Bishop began to undress the Saint. Two pins on the shoulders of the saint held on the stole. When the Bishop went to remove them, he pricked the Saint with the one accidentally. The Saint then, flinched, like we do when we are pricked. At that instant, those who were standing by were shaken, and the Bishop, the Abbot, monks all left.
(source)

“…If anyone visits the Church of the Saint on Zakynthos and draws near to venerate his sacred relic, they will note that he is dressed with the Hierarchical Stole, however, on his head instead of the Bishop’s Miter he wears a simple kalymmavcio with the epanokalymmavchou [the head coverings of a monk]. Many times the Fathers of the Monastery tried to remove the epanokalymmavcho and place there a miter, but the Saint however, did not allow this to be removed from his head. One time when the fathers tried very hard with a lot of strength and violence to remove it and replace it with a miter, the Saint allowed the skin of his head to tear a little on his forehead, and immediately there ran warm blood, at which time the fathers seeing this miracle were afraid, and seeking forgiveness from the Saint left him in peace wearing the epanokalymmaucho, a sign that the Saint judged and perceived his monastic identity, something which during the whole period of his life, his monastic disposition was that which informed his every decision, his every action, his every phrase…”
(source) 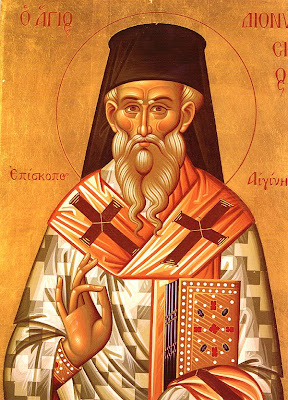 
Apolytikion of St. Dionysios of Zakynthos in the First Tone
The offspring of Zakynthos and bishop of Aegina, protector of Strophades Monastery, Saint Dionysios, O faithful, let us all with one accord now honor and sincerely cry to him: "By your fervant prayers save us who are observing your mem'ry and who cry to you: Glory to Christ who glorified you; glory to Him who made you marvelous; glory to Him who gave you to us as a sleepless advocate.
(taken from: http://goarch.org/chapel/saints/342)
Through the prayers of our Holy Fathers, Lord Jesus Christ our God, have mercy on us and save us! Amen!
Posted by Agioi_Anargyroi at 12:49 PM