St. Moses the Ethiopian, the Righteous of Scete 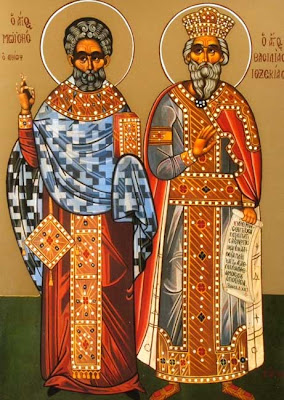 Icon depicting St. Moses the Ethiopian and the Righteous Hezekiah - Commemorated on August 28 (taken from: http://christopherklitou.com/icon_28_aug_moses_the_ethiopian_ezekias_the_king.htm) 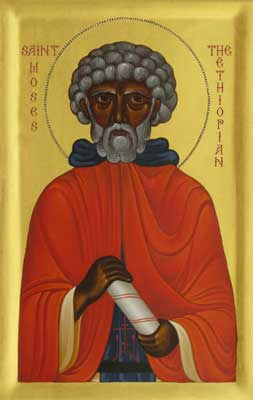 Icon of St. Moses the Ethiopian (taken from: http://www.uncutmountainsupply.com/proddetail.asp?prod=1MO43&cat=30)
+
Selected quotes from St. Moses from the sayings of the Desert Fathers (forgive me for not including all the various online sources)
+
Once the Fathers in Scete asked Moses to come to an assembly to judge the fault of a certain brother, but he refused. When they insisted, he took a basket which had a hole in it, filled it with sand, and carried it on his shoulders. When the Fathers saw him coming they asked him what the basket might mean. He answered, "My sins run out behind me, and I do not see them, and I am come this day to judge failings which are not mine."

“Come, my child, and taste of the blessed life of obedience,” Abba Moses told a young man who was ready to follow the monastic life. “In this life, you will find humility, strength, joy, patience, and forbearance. Within it, contrition is born and love blossoms. It aids the good monastic disciple to keep all of the divine commandments throughout his life.”

A certain brother came to the abbot Moses in Scete seeking a word from him. And the old man said to him, "Go and sit in thy cell, and thy cell shall teach thee all things."

The [Elder] was asked, "What is the good of the fasts and watchings which a man imposes on himself?" and he replied, "They make the soul humble. For it is written, "Consider my affliction and my trouble, and forgive all my sins" (Psalm 25:18). So if the soul gives itself all this hardship, God will have mercy on it." The [Elder] was (also) asked, "What should a man do in all the temptations and evil thoughts that come upon him?" The old man said to him, "He should weep and implore the goodness of God to come to his aid, and he will obtain peace if he prays with discernment. For it is written, "With the Lord on my side I do not fear. What can man do to me?" (Psalm 118:6).

“Affliction,” [Abba] Moses once said, “lasts for a short time, while peace is forever, by the grace of God the Word.”
+ 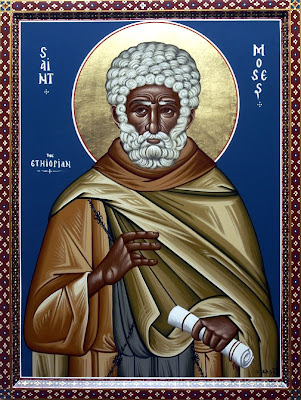 Icon of St. Moses the Ethiopian, the Righteous of Scete (taken from: http://ocafs.oca.org/FeastSaintsViewer.asp?SID=4&ID=1&FSID=102414)
Troparion - Tone 1
You abandoned the Egypt of the passions, O Father, Ascending the mount of the virtues with fervent faith, Taking the Cross of Christ upon your shoulders; And being glorified in godly works, You proved to be a model for monastics, O summit of the fathers. Pray unceasingly with them that our souls may find mercy!
Kontakion - Tone 3
Your mind was filled with a holy inspiration from God, Turning you from the lust and pleasures of the flesh, Bringing you to the height of the city of God! O Holy Father Moses, intercede with Christ God that He may grant us great mercy!
(taken from: http://www.oca.org/FStropars.asp?SID=13&ID=102414)
Through the prayers of our Holy Fathers, Lord Jesus Christ our God, have mercy on us and save us! Amen!
Posted by Agioi_Anargyroi at 7:48 AM

Labels: Lives of the Saints, Quotes of the Fathers